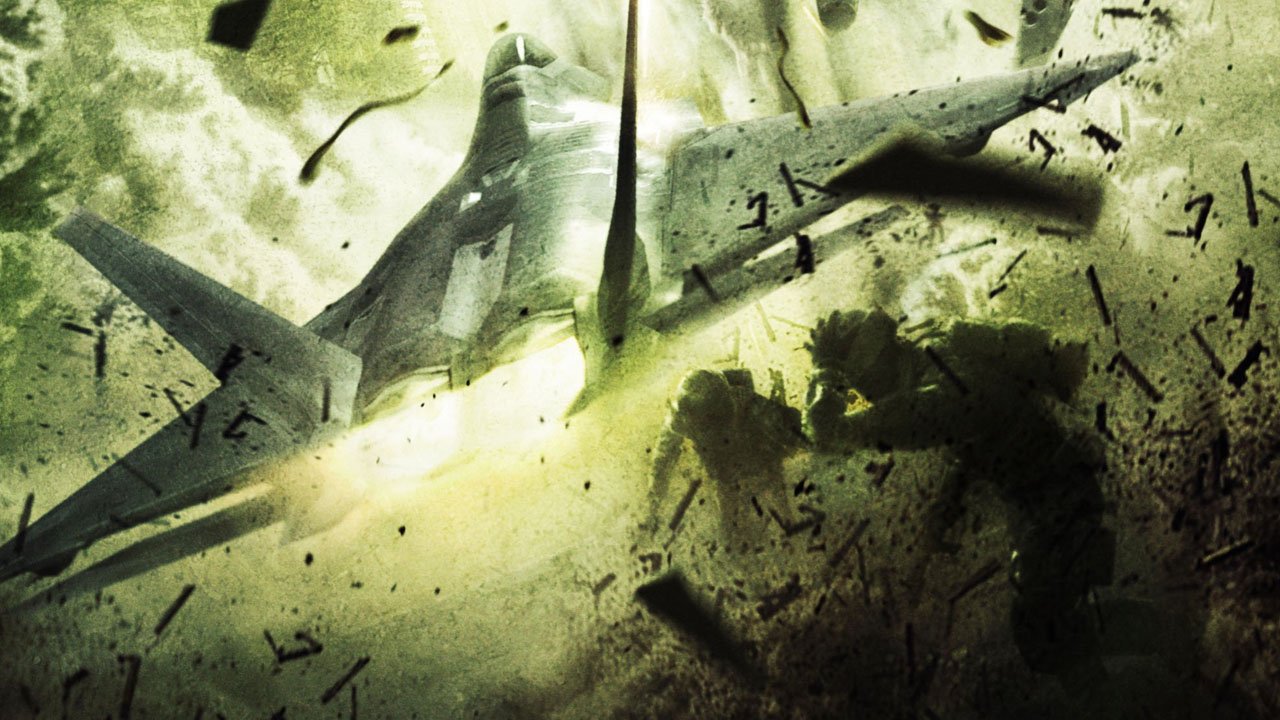 If the concept of flying around in a fighter jet and blowing up bad guys in 3D sounds appealing (and it should), then Ace Combat: Assault Horizon Legacy+ is the game for you. The folks at Project Aces didn’t beat around the bush with this one. Short of including “Highway To The Danger Zone” in a perpetual loop on the soundtrack, they’ve provided a portable dogfight simulator that delivers that simple pleasure in its best form and nothing else. There’s a plot, but it’s not worth much. Really this is all about the bursts of aerial combat that are executed exquisitely for maximum fun with little to no time wasted. There’s not much in the way of bells, whistles, n’ extras. It’s a game designed to scratch an itch and it scratches the heck out of it, then wraps up before tedium sets in. The title won’t win any awards for ingenuity, but it will provide any gamers who like to casually call each other “Ice Man” and “Maverick” with plenty of bonehead blowin’ up fun.
So, there is a plot to this thing, not that it matters much. It’s essentially all militaristic gobbledygook carved together with fictional nations and politics to avoid anyone being offended. Essentially there’s been a military coup and a country has been taken over. For some reason, the combat and defense involved with this war is pretty much all aviation based. So as a hot shot stud of a pilot with no face or name, you’ll be required to execute a number of dogfights and kill a number of bad guys for the sake of truth, justice, and whatever. You won’t have to worry about keeping up with all this through complex cut scenes. It’s mostly relayed to you through the voice of a gruff military leader with minimum animation. Trying to follow the whos n’ whats n’ wheres of what’s happening will just make your brain tap out with exhaustion. So just keep track of which planes you need to blow up real good in any mission and you’ll be fine.

After a brief training mission to pick up the basics of the controls, the game plays out in short action packed episodes. They rarely last longer than 5-10 minutes and rarely consist of more than a series of dogfights. Thankfully, the dogfights are quite fun and wrap up quick before wearing out their welcome. So, it’s a good time. Controlling the plane is as simple as moving around your circle pad. The trigger buttons cover breaks and acceleration, while the face buttons serve up machine gun, missile, and lock on controls. There’s another button that moves the camera into locked position close behind your aircraft and hands off flight controls to the computer to trail an enemy closely while you focus on firepower. I suppose this could be described as a “cheat button” by flight simulator purists, but I don’t feel that way in the slightest. The thing is that once the missions really kick into high gear, you’ll have so many planes to worry about that it’s actually quite helpful. It saves needless flying around time wasted simply trying to keep track of enemies and helps keep Ace Combat fast n’ action packed from start to finish. That’s a damn good thing too because this is a damn entertaining little game. Part simulator, part arcade flying shoot em’ up, and all fun.
The graphics are obviously limited to the capabilities of the lil’ ol’ 3DS, but look quite good in context. There are a number of maps with just enough variance in locale to keep things fresh (sometimes you fight over deserted islands, sometimes you fly in cities, etc.). While the focus of each mission is essentially the same (“Hey kid, see those bad guys in planes? Please shoot the crap out of them and save your own planes), but there’s enough variance to the simple formula that it never gets too repetitive. There aren’t that many missions, so you’ll burn through this sucker somewhere in the 5-10 hour range depending on skill level and dedication. There are a variety of difficulties to help lengthen or shorten that experience, but not too many. You can also customize your plane should you choose to do so, but there are so few options that it doesn’t make much of a difference. Unfortunately the game is limited to single-player only, so any dreams you had about dogfighting with your 3DS buddies or with strangers over the internet must die right here and now. You’ll have to wait for the inevitable Star Fox 3DS game for that little joy.

Make no mistake, the longest and most complex element of Ace Combat: Assault Horizon Legacy is it’s convoluted title. Other than that, you couldn’t get a more simple or direct jet-based dogfight sim. However, acknowledging that this is a simple and short game is not the same thing as saying that it’s a bad one. You may only have one mode of play on the cartridge, but it’s quite fun and well designed. In particular, the 3D was very well handled. Depth and flight go hand-in-hand and the good folks at project Project Aces went out of their way to ensure that every moment of gameplay is a 3D eye-popper that will make you want to crank the 3D setting on your screen to full blast. Flight games are also helped quite a bit by the added sense of depth as you have to constantly keep track of your surroundings in 360 degrees. Whenever I turned the 3D off, the game didn’t just look a little worse, it played a little worse. I know in the age of the 2DS the sheen has worn off glasses-free 3D, but I still find it quite amusing and Ace Combat featured some of the best uses of the technology I’ve ever seen on the system (especially from a third party developer). It might be short and simple, but there’s no denying the fun to be had with this title. If you’ve been itching to flying around and blow stuff up real good on your 3DS during a slow release season for games, feel free to pick this game up for some fleeting flashes of fun.

Make no mistake, the longest and most complex element of Ace Combat: Assault Horizon Legacy is it’s convoluted title. 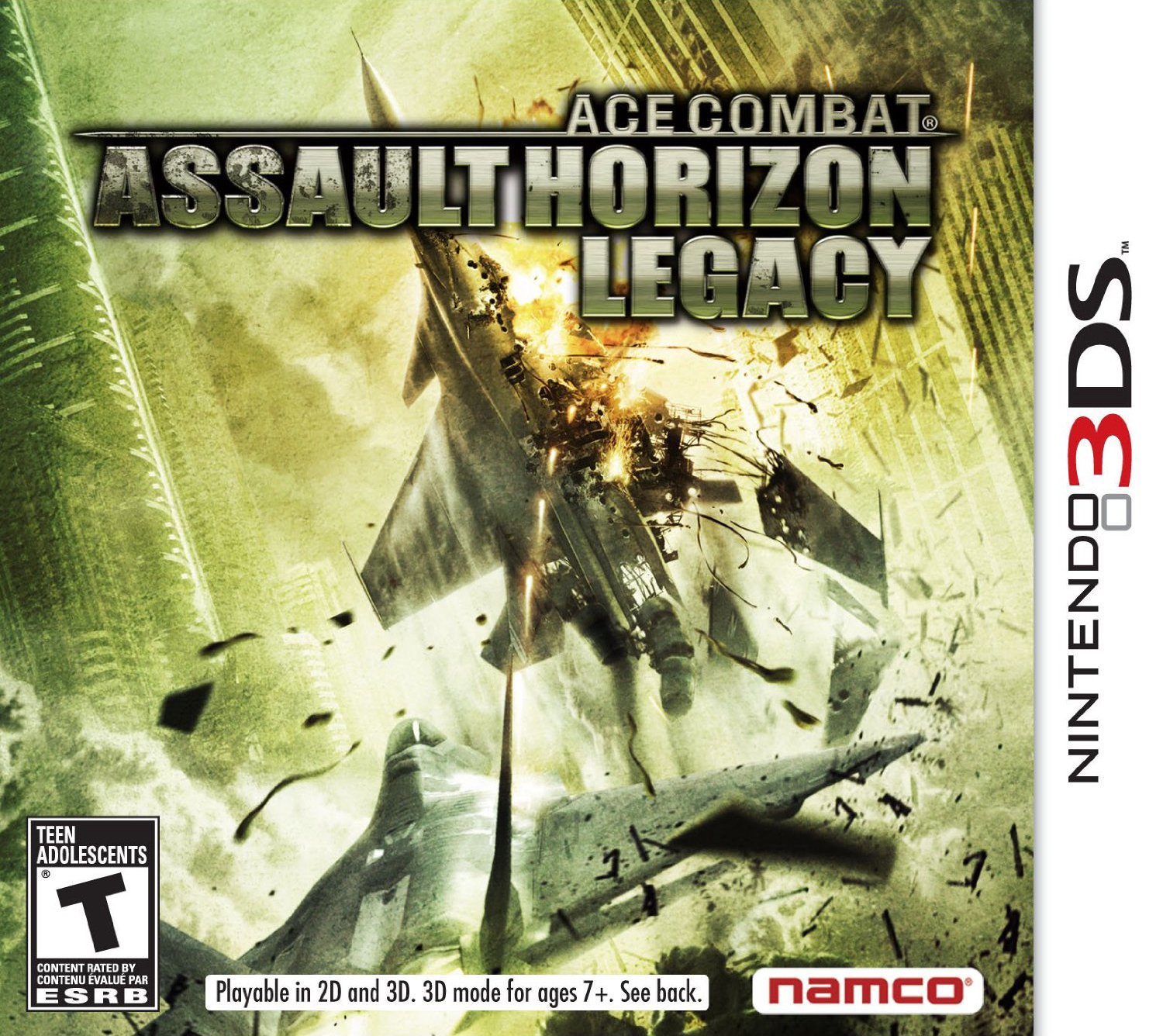