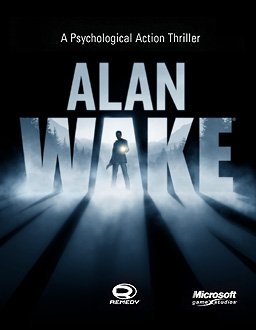 The water in Alan Wake is absolutely breathtaking. That may seem like an unusual observation for the opening of a game Review, but the vistas really are that pretty. Cauldron Lake ripples realistically in the wind and the rivers and ponds all shimmer above a haunting aquatic darknes Even if it is a strange observation, it’s as good a place to start as any. The attention to detail in Alan Wake is so strong that the most trivial design elements stand out as stunning achievements, and it’s representative of the overall quality of the game. Remedy Entertainment’s first new project since 2003 is so good that they could afford to spend a little extra time getting the water to glisten.

Alan Wake is so good, in fact, that it transcends conventional criticism. Reviews tend to analyze video games as games, and with good reason.  Most new releases still have many obvious design issues or technical errors that can be identified, mocked, and lamented. Examined according to such criteria, Alan Wake is nearly flawles The controls are tight and responsive, the level design is functional and aesthetically pleasing, and the difficulty intensifies naturally the farther you progress through the story.

The story in question owes a lot to Steven King, going so far as to reference the writer in the opening narration. Like King, the game’s titular character is a novelist. Unlike King, Alan suffers from writer’s block. His quest for a cure takes him to Bright Falls, Washington, a small logging community with architecture reminiscent of The Shining. Once he arrives, the town literally goes to hell. His wife Alice gets kidnapped and Alan wakes up a week later with no memory of the time that has passed. It all gets pieced together over the course of six episodes during an adventure that is one part Twin Peaks quirk and one part Twilight Zone head game.

With so many sci-fi and horror referents, Alan Wake won’t win any awards for originality, but the unique presentation ultimately makes such concepts irrelevant. The seamless blend of interactive gameplay and narrative storytelling is unlike anything that’s ever been accomplished in the medium. The script is very tight and compact, with no excess plot threads or side quests, while the mysterious and supernatural devices (and quirky NPCs) serve to cultivate an immersive gaming world.

It all comes together exceptionally well. After regaining consciousness, Alan begins finding the pieces of a book that he doesn’t remember writing and that happens to be coming true. A malevolent darkness has swallowed the town and Alan’s text holds the key to releasing the light and saving Alice.

The third-person combat is designed to compliment the setting and the plot. The possessed townsfolk (called Taken) can only be harmed after the darkness has been driven from their bodies, meaning that the flashlight is the most important tool in your arsenal. The cylindrical beam also functions as a targeting cone. It’s very easy to hit your enemies, but encounters favor resource management over accuracy. Utilizing light from a variety of sources like flares and generators is essential for crowd control, and running out of batteries mid-combat is one of the most frightening aspects of the game.

The Taken aren’t the smartest monsters, but they’re serviceable horror incarnation Each enemy is faster and stronger than Alan, and they are all very, very persistent. A claustrophobic fog descends whenever the taken are near, which only serves to amplify the tension. The sudden emergence of a horde of axe-wielding lunatics is always a startling experience, particularly once you realize that the simple (yet brutally effective) AI has you completely and hopelessly surrounded. Alan Wake isn’t the scariest game ever made, but each siege of serial killers is more than enough to get your heart racing.

With regards to other gameplay elements, Alan Wake doesn’t take many chances, but does wisely cut out a few excessive gameplay convention There are no weapon upgrades and the only items in your inventory are bullet  The start button exists primarily to facilitate trips to the bathroom, and while you can brush up on your manuscript collection or statistics, doing so isn’t a necessary component of the game. I could keep going, but it’s easier to praise by exception. Just assume that everything not discussed is perfectly fine.

Having said that, I’m obligated to mention the radio and television programs that you’ll stumble across while exploring Bright Fall The shows are an optional collectible, but that’s no excuse for their abysmal implementation. Some of them run for as long as five minutes, forcing you to stand and wait until the dialogue reaches its conclusion. It breaks up the gameplay without adding any significant depth to the environment, and it’s hard to believe that the developers couldn’t come up with a better way to flesh out the story.

Alan Wake probably won’t be my favorite game this year. It doesn’t push my fan boy enthusiasm to the necessary levels of blind devotion. Idiosyncratic tendencies like genre favoritism will lead other people to have similar reaction  There are plenty of legitimate reasons to dislike the game. Alan Wake is special because the final evaluation can be based on opinion and personal preference instead of mechanical deficiencie I wish every game could be discussed in such a manner, and that’s why you should play Alan Wake. It’s a fantastic game that also happens to demonstrate the potential for video games as a narrative medium.

I wish every game could be discussed in such a manner, and that’s why you should play Alan Wake.
REVIEW SCORE
10
File Under: Action, Adventure, Microsoft, Xbox