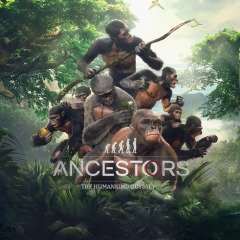 This was the much anticipated new game from Patrice Desilets, Assassin’s Creed and Prince of Persia fame, which has recently been ported over to consoles.

So, Ancestors: The Humankind Odyssey is the first in a series of games that promises to show us where we, as humans came from. To say that this game is ambitious feels like an understatement, especially when intro screens tell us that this game is based on real events and task players with guiding a tribe’s evolution through learning through trial, error, and repetition, and spontaneous genetic mutations among newborns. It’s a complex idea with a lot of promise, but, unfortunately, the initial PC release had some problems with load times and a lack of player onboarding that really put a damper on things.

Luckily, it looks like the people at Panache Digital have taken criticism to heart and have attempted to address these problems in the console port of Ancestors. While load times are still pretty long, the wait has been dramatically reduced, and the beginning tutorials have been beefed up significantly, making a new game a lot less intimidating than it used to be. User Interface elements have been expanded as well, so players won’t feel as lost and aimless as they did previously. These improvements might not sound like much, but in a game like Ancestors: The Humankind Odyssey, they go a long way.

That isn’t to say that Ancestors doesn’t still suffer from its share of problems. Gameplay can become very repetitive at times and the cost for failure can feel insurmountable, leading to hours of frustration and tedious work disappearing in an instant. To add to that, controls never feel particularly precise, especially when attempting to traverse through the safety of treetop foliage, resulting in countless broken primate ankles. The gameplay is a story of highs and lows, from the thrill of discovery to the anger of another missed jump landing a few feet away from a hungry python. Even more nerve-wracking, the sound cues throughout the game are still fairly quiet and subtle, demanding constant attention in what could otherwise be a great game to settle into with a podcast or audiobook.

Other than that, Ancestors can really shine. The graphics are still lovely, with diverse environments and detailed animal life realistically blending into the undergrowth, and the music fits the scene in just the ways that it should. The whole thing is a top-notch presentation, to say the very least.

Ancestors: The Humankind Odyssey is a game I’d love to recommend to everyone, but I fear the complexity and finicky controls doom it to niche appeal. If you’re looking to give it a try, I would highly suggest you check out this console port over the initial PC release for ease of access and far less waiting on load screens.

Patrice Desilets’ study of our primitive ancestors in the aptly named Ancestors: The Humankind Odyssey has come to consoles and brings with it a host of improvements, but still suffers here and there with some points of frustration.
REVIEW SCORE
7.5
File Under: Take Two Interactive