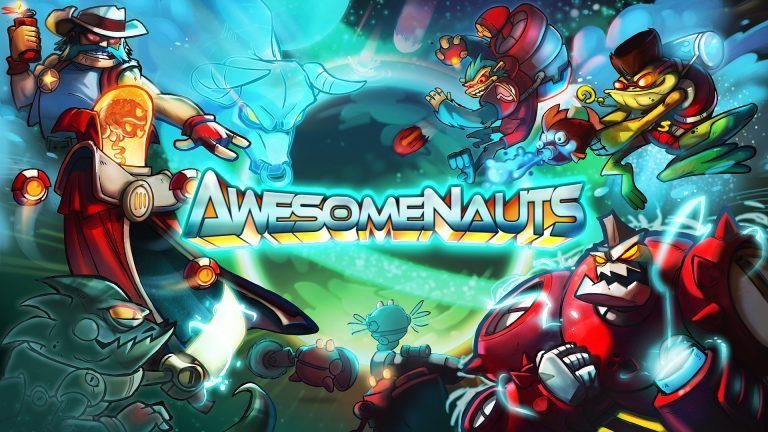 When I first saw a trailer for Awesomenauts, I thought it looked like a fun new game, in the vein of the recent Shoot Many Robots, with customizable characters with different assortments of weapons, fighting it out online against myriad opponents.  Not everything in that statement is incorrect, but the most notable part is that this is NOT a fun game, it’s instead a very frustrating one, which has a lot of unrealized potential and promise.

The set-up for the game is a simple one, that in a future universe, mercenaries known as the Awesomenauts are hired to protect a faction’s mining facilities, while at the same time attacking those belonging to rivals.  Where the game becomes frustrating is in how the matches actually play out. First and foremost, this is a game meant to be played online instead of offline, so your only real choices when playing offline are against practice dummies, and they’re not all that entertaining or interesting.  But playing online is a frustrating experience, for two disparate reasons.  The controls are simple in this game, but it’s levelling up your character which can prove quite arduous and time consuming.  The actual matches are dreadfully boring, as there’s not much variety to be had, and you start the game pathetically weak, not just against rival online players, but also against computer generated players, as well as automated turrets.  The balance between levels and characters is not at all adjusted in a fair manner, which makes playing through matches very tiring and repetitive, as matches go on far too long, and levelling up takes an extreme amount of patience and time to unlock worthwhile upgrades and characters with better health than those that you start the game with.

The second big problem with the game is that of connectivity.  Many times when trying to play through maches online so that I can gain more experience to level up, the game instead lost its connection with the server, booting me from the game, and making any time I’ve spent playing the game in that match meaningless, with no XP gained.  Having checked on forums and seeen other such complaints, it’s a sad fact that this game has major issues with maintaining seamless online play, and considering how the game is mainly an online game, this is a major pitfall.  Because of the connectivity, the prior issue of it taking far too long to level up because even more pronounced, making the game that much less enjoyable to play through.

Apparently the developers are currently working on DLC for this game, and looking at addressing the issues that gamers and reviewers have brought up regarding balance and connection issues.  If these two issues were greatly improved, this game would be a far more enjoyable experience, but as it is it’s fraught with frustration, making it a game I’m very unlikely to revisit until such changes are enacted.

The set-up for the game is a simple one, that in a future universe, mercenaries known as the Awesomenauts are hired to protect a faction’s mining facilities, while at the same time attacking those belonging to rivals.
REVIEW SCORE
5
File Under: Action, Adventure, Arcade, Xbox