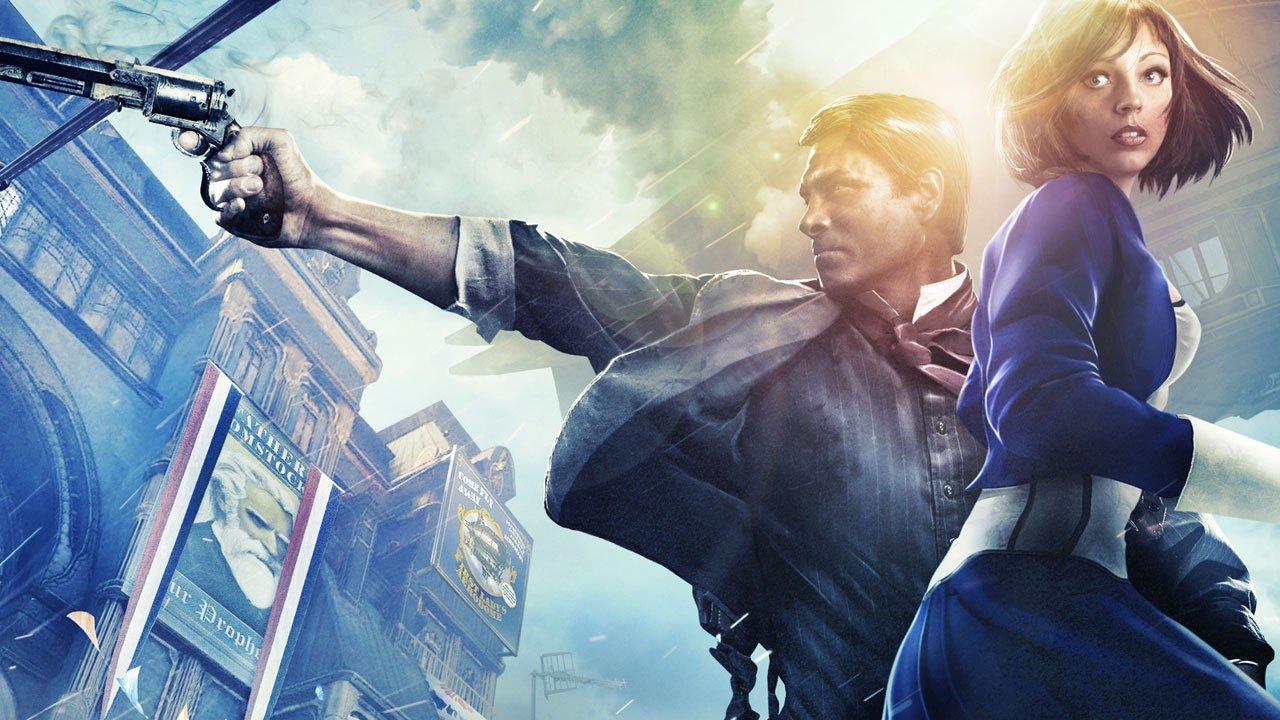 When Bioshock first landed on consoles many console veterans didn’t know what to expect. PC gamers, on the other hand, expected a dark, moody, atmospheric game that breathed life into its characters via audio recordings, and put players through a gaming experience by turns filled with unique mechanics and occasionally even threw out some scares. What no one expected was the level of uncompromising political critique of Objectivism and the way it was weaved seamlessly into a provocative examination of the way we play games. In one fell swoop, Ken Levine established himself as the “philosophical bad boy” of gaming. Now he’s gone and done it again.

A Return To The Bad Old Days

Bioshock Infinite , just like its predecessor, starts out with a simple premise of a man making his way to a lighthouse. But where the original was a tale of seeming disaster and survival, the story of Booker DeWitt is that of a man on mission. He owes a massive debt to someone and that debt will be cleared if he goes to the flying city of Columbia and escapes with a girl named Elizabeth. Mind you, this flying city is soaring the skies in the year 1912, and it is literally heaven on Earth as long as you’re rich, Caucasian and American. Over the course of the game, the narrative manages the walk an incredibly delicate tightrope, balancing a critique of American exceptionalism, religious zealotry, a tale of redemption and… quantum theory. Somehow, it actually succeeds. This is a bold, imaginative tale full of challenging and provocative ideas and it is amazing that in a world where unquestioningly “heroic” American soldier FPS games are the industry standard, it managed to get made.

It is also a remarkably unpleasant story, exposing a side of America that most people would like to forget existed, with a casual, institutionalized prejudice that immerses players in ways no book or movie can. For many younger gamers in North America, this is likely a surprising reminder that, like modern Germany of the 21st century, there are things in the history of the USA that are shameful. Depending on the political leanings of the individual player, this game is in some ways a Republican heaven, or nightmare. It is a necessary, but unpleasant experience. This is definitely Ken Levine’s strongest overall story, though it lacks the same laser-like focus as the original Bioshock which was a ruthless examination of the foibles of Objectivism. Levine successfully juggles his various elements, but the political critique gets less time in the light as the other balls come into play. This isn’t a slight to the story, as it’s probably going to be one of the best of the year—likely the generation—but it does mean that fans looking for a heavier political focus may be left wanting.

In the visuals department, Infinite poses no new surprises. This is still the Unreal engine, creaking along as it must in the twilight of this console generation. It’s been optimized so the uglier characteristics of the past, like delayed loading in of higher res textures, have been largely addressed, but there’s still some discrepancy between platforms. PC obviously fares best for those with the rig to handle maxed out settings, while the Xbox 360 and PS3 look less tidy, though still quite playable with stable framerates throughout. Of the two, the 360 version looks slightly crisper in the texture resolution department, and the PS3 suffers from occasional screen tearing. Again, none of this is extreme, but it does look like the PS3 is still giving multiplatform developers some problems with maintaining parity. On the other hand, the real scene stealer here is the phenomenal job the art team has done. As with Bioshock, Infinite is a wonder of historical recreation. The 50s art deco atmosphere of a gloomy, broken undersea city has been replaced with the bright sunshine of the industrial era, full of illustrated posters, classical buildings, and a lot of wood, stone and steel to reflect his pre-plastic era. It is an impressive work of atmosphere building, and, like its predecessor, puts gaming’s best foot forward as an argument for immersing an audience in a world.

The audio of the game is going to be a standout this year, and will probably win awards. Courtnee Draper, the voice actor for Elizabeth, puts in one of the best performances of the year for a game, though she is apparently now retired and going back to law school. Troy Baker does a workmanlike job voicing Booker DeWitt and many of the usual, high profile voice acting suspects such as Yuri Lowenthal and the ubiquitous Jennifer Hale all put in appearances with the expected, quality results. The music is probably the highlight of the audio package, with conventional orchestrated scoring for the dramatic moments, tense strings for combat, and, perhaps most surprising of all, period renditions of Generation X bands such as Tears for Fears, R.E.M. and even Soft Cell (or Gloria Jones, depending on how much of a purist you are). It’s one of those startling, “they absolutely did not need to do it, but it’s mind blowing that they did” touches that separates the game from so many others for the sheer amount of unnecessary but appreciated effort. The actual quality of the audio is also top notch, with lots of directional sound taking place beside, behind and every other direction. The guns carry a good amount of force behind them and when things explode, Infinite isn’t afraid to take advantage of the subwoofer to loud effect. It is a top notch audio presentation, evocative and making full use of multi-speaker systems.

For people that played Bioshock, this is essentially more of the same. Moody, atmospheric shooting in a period setting, but with something called “Vigors” instead of “Plasmids.” It’s still not as a run n’ gun as a typical Call of Duty game, and it still provides an array of tools to use beyond just shooting as part of its combat regimen. There’s still a period recreation of all the usual standbys like a pistol, a shotgun and an automatic weapon of some kind, in addition to heaver options like rocket launchers. But there are also some tweaks to the central concept, such as the addition of Halo-like shields that can now absorb the first few waves of bullet fire and then require time to recharge, while health itself is regained through food and medical kits. Even the Vigors themselves have gotten a tweak, with an emphasis on a primary, one attack mode, and a secondary “trap laying” mode that allows players to lay out a variety of traps—from fire, electricity to murderous crows—that only activate when enemies walk over them.

The two biggest changes to combat are in the form of skyrails and “tears” in reality. The skyrail is probably the most exciting addition simply because of the mobility if offers players. Essentially it’s a “roller coaster in the air,” allowing the player to vault towards it if sufficiently close enough, and then simply ride the rail around the area, shooting at people, or targeting them and vaulting off with another press of the button to deal massive melee damage. It dramatically changes the pace of combat, allowing players to just yank themselves out of a tight spot, circle to another area, and drop off to either change tactics or simply get a breather while shields recharge. The other addition is “tears” in the fabric of reality, which contain anything from weapons to cover, to automated allies. On request, Elizabeth can open up these tears and manifest the selected item for a quick heal, or sudden assist from a turret gun. She can also randomly throw ammo or healing items at the player. She never actively participates in combat, but she also never gets in the way, nor is it ever required that she be protected in the agonizing manner of most escort missions.

In many ways, the addition of the recharging shield with item based health, plus a variety of powers to mix up with weapons and the verticality and mobility of the skyrails, makes combat in Infinite feel like the first Halo. There’s a sense of freedom and experimentation to the combat. The pace of the game moves from the pleasure of exploring a world to conventional corridor shooting, to opening things up with large playground battlefields that invite the player to see how many different ways to fight. This is not a stereotypical FPS by any means, the pacing of the game appeals to a much broader crowd than simply those that want to sit at one end of a corridor while mowing down enemies that stream from the other end.

And it’s here, in the pacing, that Bioshock Infinite reveals why it’s one of the best games of 2013. In addition to the unique style of combat, the game isn’t afraid to slow things down and allow players to simply absorb the atmosphere of the painstakingly detailed city of Columbia. Nor is it afraid to tackle philosophy, religion, ideology, economics, or even revolution and all the ways that humans mess these ideas up. It’s also not afraid to look at meaningful relationships and their cost, or the edgier ideas being explored in quantum theory, and yet all of this is somehow thrown into a blender and turned into a first person shooter.

Some things take the shine off the overall package; Levine is still using many of the same narrative devices he used all the way back in 1999 with Sysem Shock 2 and Bioshock, so what’s compelling here is the story, not the way it’s told. There are also occasional AI issues, with Elizabeth frequently running off and talking to you about potential points of interest which you can’t even see, because she’s gone off on her own. There’s also the fact that for PS3 owners, there’s some implementation of Move and while it works, it doesn’t work well (moving the reticle to edge of the screen to turn once again rears its ugly head) although this is also counterbalanced by the fact that the PS3 version includes a copy of Bioshock on the disc for those that somehow missed it the first time. And of course, for some, the lack of multi-player might hurt, but it’s honestly unnecessary here, and a testament to Irrational Game’s common sense that they didn’t waste time or money creating the mode.

All in all, however, Bioshock Infinite is 2013’s first, “easy” nomination for game of the year. The first person shooting brings something new to the table, while the pacing caters to those without ADD, and the story assumes you’re a reasonably mature human being with a taste for something beyond the intellectual equivalent of pablum. There will always be a place for big dumb shooters, but there is also a place for big smart ones. Bioshock Infinite is one of the rare titles of this generation that fills the role of the latter. Any self respecting hardcore gamers needs to play this game.

Bioshock Infinite , just like its predecessor, starts out with a simple premise of a man making his way to a lighthouse.

File Under: 2K Games, Bioshock, FPS, Irrational Games, PC, PlayStation, Xbox
A retail version of the game reviewed was provided by the publisher. You can read more about CGMagazine reivew policies here. 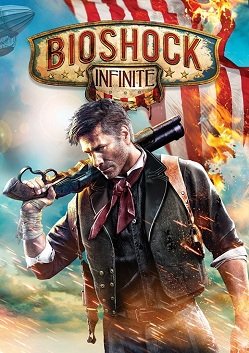