The Collision is Alright 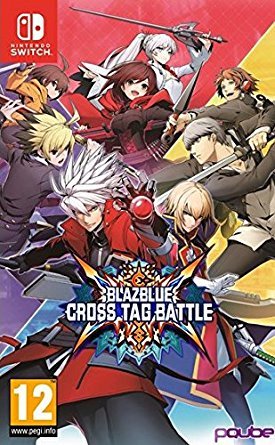 Crossovers are a staple in fighting games. Capcom’s made numerous titles focusing on their stable of characters battling their counterparts from Marvel, Tatsunoko, and others. Now, Arc System Works is taking it’s shot at crossovers with BlazBlue: Cross Tag Battle.

Featuring characters from the developer’s own BlazBlue series, Atlus’ Persona 4 Arena, French Breads’ Under Night in Birth, and Rooster Teeth’s RWBY, the result is a perfectly fine fighting game that is fun for both newcomers and veterans alike.

Though Cross Tag Battle features four different universes, gameplay is mostly reminiscent of the BlazBlue series, though the controls are much simpler in comparison. You choose two characters to enter a fight with, and you have the ability to swap them out with the push of a button. Two normal attacks, an overhead/sweep attack, a tag out button, and partner assist are what you’ll primarily use to string together combos. On top of that, there’s the standard air dashes, high jump, throws, reversals and other moves that are typical of anime fighters. The action is very fast paced, though it’s not so overwhelming that it is indecipherable. On the contrary, it’s exhilarating, which should come as no surprise to those who are familiar with Arc System Works pedigree.

What is surprising is how friendly it is to newcomers. Apart from the core set of buttons you’ll be using, Cross Tag Battle has a robust set of tutorials that drill you not only in the simplest commands but actually provide a decent explanation on how the more advanced moves work. Special moves are also easy to pull off, with the vast majority requiring nothing more than a quarter circle + button input. This follows Arc System Works’ last title, Dragon Ball FighterZ, which similarly simplified inputs in order to make the action easier to understand for newcomers. It’s similarly welcome here, and the battles do not suffer for it.

As for the characters themselves, the fact that four different universes are present here means that there is a wide variety of fighting styles and tag team combinations to choose from. Personally, I’ve been rocking a Ruby Rose and Gordeau team, at first because they were the two characters that use scythes, but now because Ruby’s quick attacks coupled with Gordeau ridiculous reach make for a potent combination. It’s fun to experiment with the different characters here, and even though some of them are lacking the unique mechanics that were prevalent in their home titles, are engaging to play.

But while playing as characters from each universe is fun, looking at them is another story. As a 2D fighter, the pixelated models themselves are gorgeous to watch when isolated with characters from each franchise. But when you combine, say, a character from Persona 4 Arena with one from BlazBlue, it’s apparent that their two different pixel styles do not mix well. While this could be the developer’s intention, I found it jarring and distracting in practice. In particular, the RWBY characters look stylistically different from every other roster. They would be perfectly fine if every character shared their style, but when put up against a character like Hyde from Under Night in Birth, it detracts from the overall experience.

The Story Mode is broken up into different episodes, each focusing on the protagonist of one of the four franchises as they seek to escape the world they’ve all been thrown into. It is, fortunately, not a series of animated cutscenes with no gameplay to break it up. It is, however, an excuse plot that is completely lacking in substance, only serving to set up moments of fanservice. Want to see Ragna and Yu Narukami team up? Or do you want to watch Ruby Rose and Gordeau talk about how great their scythes are? If so, then this mode is perfect for you. It’s pure fanservice, and your mileage will vary depending on how much you like seeing these characters interact, because there is practically no challenge to be found here. Much like the story modes in other fighting games, Cross Tag Battle’s is extremely easy to complete, even in comparison to other titles in the genre.

Outside of the story mode, the only other major single-player mode is Survival, which pits you against an unending series of fights that slowly get more difficult over time. And apart from adjusting the difficulty of the A.I., that’s the extent of the single-player modes, which is disappointing, to say the least. An arcade mode would have done wonders to extend the longevity of the game, which relies heavily on the multiplayer if you want to get your money’s worth.

It’s fortunate then, that going online in Cross Tag Battle mostly works. You can either join lobbies with your avatar, or join a ranked queue straight away. Of the two, it’s best to go into the queue, as trying to enter matches with your avatar is a hassle, which was also an issue in DragonBall FighterZ that has not been fixed here. While much of my opponents were Japanese, due to the earlier release date in Japan, I encountered lag infrequently. The only truly noticeable moment where lag hindered the experience is in the character intros, which always move slowly and results in both players skipping them to get on with the fight. If you come in with the intention of playing a lot of online matches, then you’re going to have a good time here.

On the Switch, Cross Tag Battle is best played in docked mode, both because the lag was much less of a problem when played off a TV and because I found it difficult to input many commands while holding the switch in handheld mode. That’s not to say it’s impossible to play it on the go, just that I had a much better time with it when I was docked.

Though the contrasting art styles and lack of single-player modes detract from BlazBlue: Cross Tag Battle’s overall presentation, the core gameplay itself is exhilarating. Fun, fast-paced fights are made possible by some well-designed characters, and for fans of any of the franchises on display here, watching them banter with each other is a delight. This collision may not have been inevitable, but the result is a fighting game that is enjoyable no matter if you’re a weathered veteran or a first-timer.

BlazBlue: Cross Tag Battle has some issues, but the gameplay is exciting and deep enough that fans of any of the franchises on display here will have a good time.
REVIEW SCORE
8
File Under: Arc System Works