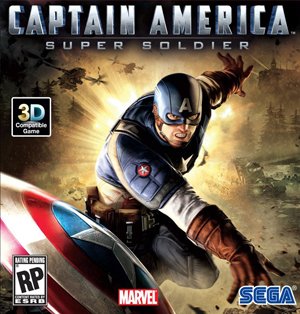 You’ve finished watching the Captain America movie, and now you want to feel like a super hero.  Other than putting on a red, white and blue leotard and  grabbing a shield, your next best option is playing Captain America: Super Soldier.  The track record for movie licensed titles has never been solid and Captain America: Super Soldier does nothing to change this.  It’s a mediocre game with a passable plot to keep you going and functional, responsive combat, but there really isn’t enough variety or depth to drive you back to the game after you’ve finished it.

Like the movie, the whole game takes place during World War II.  As Captain America, you have to stop the Nazi scientist, Baron Zemo from his mad research, but it’s the Red Skull and his right hand man, Dr. Zola, who are really at the heart of the evil operations.  The plot is driven forward with missions and cut-scenes voiced by the movie’s star, Chris Evans.  Though it’s a plus to have the big-screen star voice-acting his main role in the game, his vocals are nothing spectacular.  The delivery feels flat and mechanical.

The real star of the game is the combat, though even that stops short of being anything outstanding.  It can feel cumbersome at first but becomes  becomes surprisingly responsive and fluid with practice. There were many times where I saw an incoming attack and I was able to block or counter-attack without having to escape the centre of battle.  Directing attacks from one enemy to the next was effortless and fluid and allowing for some impressive cinematic fights.  Attacking enemies fills up a gauge meter that allows special “crippling blows”, and with a full gauge, Captain America goes into hyper mode transforming into a “Super soldier”.  It’s unfortunate the game doesn’t offer many opportunities to go into “Super Solder” mode, but even if it did, it would just be downright repetitive.

Accumulating experience points doesn’t add much to the combat.   You have a total of 9 upgrades to choose from in 3 different categories; strength, shield rebounds and special shield attacks, but the moves you get with the shield aren’t really useful.  For example, the “shield stomp,”that stuns enemies all around you, is so slow that you’re better off just taking care of enemies one by one even if you’re surrounded.

The same enemies from the beginning of the game remain till the end.  There’s only a small roster of enemy types;  grunts, scorchers, screamers, and mechanics to name half.  At first these enemies are tough to deal with until you get more damage upgrades, learn their patterns, and get their schematics.  Collecting schematics, which are scattered throughout the map, allows you to stun enemies longer, deal more damage and make crippling blows fatal.  Towards the end of the game, you’re given better options to take down the bigger kahunas, but dealing a crippling blow, is one of the only alternatives to disposing them quickly.  Despite this, the lack of variety in enemies doesn’t become repetitive but that’s because the game only takes about six hours to finish.

Throughout the game you’ll some time exploring the map or picking up antique items like “ceramic eggs” and “gold falcon statues”.  You can enter tactical vision which highlights items, ledges and destructible levies which give you experience points and new items.  While the game offers  some ability to back-track, there’s not much left to pick up after you do a first run through of the game, except for maybe Captain America’s extra costumes.

In an attempt to add some replayability, there’s a variety of different items scattered throughout the map that unlock galleries, enemy origins, and extra costumes for Captain America.  There’s also a “challenge” mode to go through which awards you experience points based on your performance, but it’s not really difficult to rack up a gold score.  Completing the challenges offers experience points bonuses, but I only needed one more skill to fully upgrade Captain America by the time I finished the game.  Also, finding nearly all the collectibles is easily done on the first run through of the game.

As for the graphics, the game runs on Unreal Engine 3 with characters and environments that are detailed and murky with the rust of the 1940’s.  And though there’s not much of it, the few views you’ll get when going outdoors to go on high ground and peer over mountains and valleys to shoot down a copter are vivid and shockingly detailed.  All this comes at a cost.  At times, running through a wide area and running into a bunch of enemies caused the frame rate to drop.

On the whole, Captain America: Super Soldier is a decent game which fans of the movie will appreciate.  The best thing about Super Soldier is the battle system, and once you’ve completed the game there isn’t much left to go back to.  The lack of enemy variety and upgrades leaves a lot to be desired and would make the game feel repetitive if it were longer.  The game does have its moments with the quick intuitive combat, and shield whipping mayhem, but other than that it’s average at best.  Pick it up if you really loved the movie, otherwise this is only worth a rental.

The track record for movie licensed titles has never been solid and Captain America: Super Soldier does nothing to change this.
REVIEW SCORE
7
File Under: Action, Adventure, Marvel, PlayStation