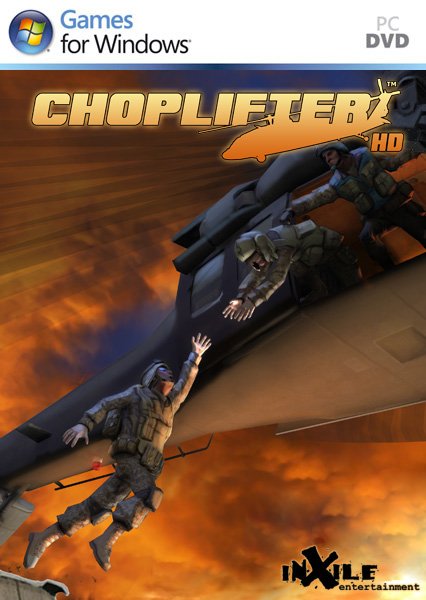 I’ve never been much for the Arcade games that Xbox offers to players in their Marketplace.  I’ve picked up a few in my time that I just had to try for myself, like Limbo (and I hear that Bastion is another I need to check out), but usually I have too many other games to get through. Prior to diving into Choplifter HD, I can’t say that I had heard anything about the game, so I went into it completely blind.

I should take the time to mention that Choplifter HD is actually a reboot of a game originally released in 1982 of the same name (sans HD).  It was initially released by a company called Brøderbund and was available on many platforms including the Atari 5200.  Its popularity gave cause for the company to make and release two sequels: Choplifter II for GameBoy and Choplifter III for Super NES and would eventually lead to the rebooted game for Xbox 360 Arcade.

The first thing that you should probably know is that if you’re picking up Choplifter HD for a game with a great story, then this isn’t for you.  You get into the action right away, but there’s no story, it’s a very arcade style game in the sense that you’re trying to get through levels that get increasingly more difficult as you carry on.  You play as the pilot of a helicopter trying to take down enemy soldiers and typically carrying out rescue missions.  To get through the missions, you need to strategically plan out who you’re going to rescue first (some people have a timer to indicate that they’re injured and only have a certain amount of time to be rescued) and how to get yourself safely back to your base.  You are armed with a gun as well as several rockets to help you successfully complete your mission.  You’ll occasionally also need to take into account how much fuel you have and make stops at places to fill up, accordingly.  As you get through more and more levels, you’ll also unlock new choppers that will make it easier for you to complete your missions.

I expected the controls to be difficult and even frustrating before I got into the game, but was instead, pleasantly surprised.  Aside from the aiming system (which after thinking about it, could really be no other way), the choppers are easy to control and maneuver.  My only complaint about the shooting system is that the gun that you’re equipped with frustratingly overheats too quickly, so paying attention to who you’re shooting and how often you’re shooting is a must to achieve the best score possible.  You’ve really got to prioritize your shots and take out the people who are going to cause you the most damage first.

If these types of games are second nature to you, Choplifter HD won’t take you very long to get through.  However, to say that the levels are easy and boring would be a lie.  There are several levels that took me numerous tries to get through and while it can be frustrating, the game is set up in such a way that you can’t be frustrated with the game, it’s more of a frustration with how you’re playing the game than anything.  Choplifter HD isn’t just a game to play once either; getting through the levels can be simple at times, but getting through the levels with 5-stars is a different story.  There are several variables that get taken into account when you’re being scored at the end of a mission, most of which can be improved upon by playing through the level again.

One of my favourite levels to play through was a zombie level where you’re bringing reinforcements to a hospital, defending said hospital and saving civilians from droves of mindless flesh-eating zombies.  This is one of the only levels where you aren’t constantly being shot at and instead, you have to focus your efforts on saving as many people as possible in the timeframe you’re given.  Plus, when you shoot the zombies, they die in this tiny, yet satisfying, green explosion.

After all is said and done, Choplifter HD exceeded my expectations as an arcade game.  The graphics are great for an arcade game, the gameplay is enjoyable despite its lack of story (sometimes, it’s just fun to play something mindlessly) and it provides a challenge.  It’s not a game I would play on a regular basis, but it’s a fun way to pass time in between some of the bigger releases you might be waiting for.

The first thing that you should probably know is that if you’re picking up Choplifter HD for a game with a great story, then this isn’t for you.
REVIEW SCORE
8
File Under: Action, Microsoft, RPG, Xbox