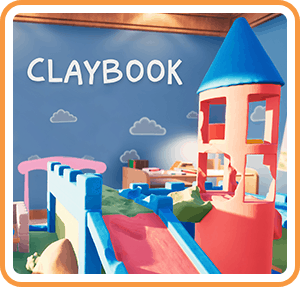 I’d be lying if is I said that from time to time, my inner child did not whisper of memories of my youth – days filled with the emotion and creativity that was all contained in one easy to lose Play-Doh tub. After toying around with Claybook, I found that it not only keeps my hands cleaner than Play-Doh, but it provides an imaginary experience that for the most part revitalizes the best aspects of what it meant to be a child.

Claybook, originally released on PC and other current-gen platforms, revolves around taking the best features of a level-editor-based sandbox, and apply realistic clay physics in order to twist the genre in ways that only Play-Doh could sustain. This comes in the form of two main modes: a playbook, which serves as the game’s campaign, and the level editor, where you’ll likely be spending most of your time not only creating your own abominations but enjoying other’s.

In practice, Claybook delivers on its promise by introducing the most realistic virtual representation of clay that I’ve yet to lay my gamer hands on. Sometimes the experience felt to real that I momentarily forgot that I was playing a video game, to begin with. As for its game modes, I found that the single-player mode was a creative take on how modern tutorials should be, offering a balance of both instructions on complex techniques and gameplay variety. In comparison to its multiplayer counterpart (which we will touch base with soon), Claybook’s solo journey brought a smile to my face not because it was necessarily innovative, but because with each new task it brought a new dimension of what I thought was possible to achieve with the game’s predisposed engine. In one level you will be digging through countless pieces of chocolate, just to play a parkour esque labyrinth on the very next – Claybook’s campaign never fails to impress.

Two of the most impressive characteristics of Claybook come in the form of gameplay and graphics. For a clay-based game, I’m surprised to say that Claybook is one of the most stunning games currently on the platform, offering lighting and a variety of hues that is unmatched by the plethora of titles the Switch has come to offer. On the gameplay front, controlling a multitude of clay shapes is challenging at first, but the stepping stones are quickly overcome as the in-game tutorial offers just enough explanation to get players going in no time, Once learned. Claybook offers gameplay that makes the player truly think, while also introducing size-shaping tools that allow you to deal with any new challenging platforms on the fly.

Yet as good as its solo offerings may be, to say that Claybook’s single-player campaign would be the main reason to purchase this title would completely missing Claybook’s true premise: its online level editor. This is – for better or worse – were the best parts, and the worst flaws of the game’s entire vision are brought into the spotlight. Much like Mario Maker, Claybook provides you with a set of tools, in this case, clay shapes, that allows you to create a map to your heart’s content. Then, by setting up goals, such as “find three hidden pieces”, these created maps are brought to life in the form of books and are ready to be shared. In theory, the idea is wonderful, but in actuality, it sometimes leaves a bit to be desired.

The main problem I have with Claybook’s online mode is the creator tool itself – mainly with how intimidating it can be at first. When I decided to give it a shot by myself, I was unsure of what to do, and in many ways felt that I was missing some sort of insight that I should have on how to better create structures. Granted, after a while with the game, I learned the ins and outs of this editor, and while I’m not confident that I could recreate the beautifully designed single player maps, I am sure I could quickly piece a decent map of my own. The problems come with other players’ inability to get over the initial learning curve. Go into the most recently uploaded maps menu, and this is a problem that quickly gains transparency, with most players writing something along the lines of “Works?”, transferring a worrying sense of ambiguity into their level descriptions.

Another issue comes when you access the recently published tab, where I was quick to notice that the last uploaded map was made months ago, potentially when the game first launched in Fall 2017 on PC, XBox One and PS4. While it is worrying that the community on other platforms seems sparse, I have hope this will change once it is in the hands of Nintendo Switch players. If they can’t manage this feat, one of the biggest reasons to pick up Claybook could be lost. But like we have seen with many past indie games, I hope to see the Nintendo Switch be the shot in the arm the Claybook community needs to get things heating up.

At the end of the day, Claybook is a title that continuously impressed me. From its beautiful visuals and rewarding gameplay to the variety of maps that most certainly redefined how I think in-game tutorials should be made, I found a game that brought memories of my childhood that I have been dying to relive. Sadly, however, Claybook, like a Play-Doh structure that slowly falls to its demise, doesn’t come without its fair of flaws – its seemingly inactive community being the most concerning. Nevertheless, I am sure that with the Switch having as many nostalgia filled players such as myself, Claybook can find new life with its very impressive Switch port.

Claybook provides a soothing sandbox experience that is only hampered by the lack of variety in premade levels currently on offer by the community.
REVIEW SCORE
8
File Under: