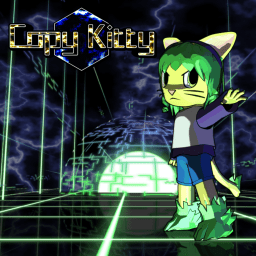 Even in an industry a few decades old, it’s easy to draw plenty of connections between games. Genre tags describing mechanics, themes, and even camera views have been codified and made apparent to any self-respecting gamer.

“Triple-A” and “indie” trends have been observed, recorded, and evolved over the past couple of decades. And yet, even though it could well be said that there is nothing new under the sun, time-honoured trappings of game design keep us impressed and coming back for more. Old-school shooters and platformers remain timeless sources of inspiration for modern works that, while not necessarily innovating like those who came before, still evoke the same feelings of pleasure and wonder. Copy Kitty is one of these, a synthesis of older games that wears its inspirations on its sleeve, and invites players to share in its passionate presentation of bright lights n’ explodin’ robots, YEAAAAAAHHHH!!!

Coming out of Steam Early Access after 7 years(!) of public development on April 19th, 2018, Nuclear Strawberry’s action-platformer extravaganza Copy Kitty… got lost in the folds of the internet a day before God of War came out. But we’re talking about it now, cuz’ I say it deserves as much! (Happy belated birthday, by the way!)

Players take on the role of Boki Lamira, an adolescent cat alien who dreams of becoming a superhero but thinks ill of her unique magic. In comes a gift from her bug uncle Savant (from an unseen delivery person with an oddly detailed text box…), and it’s… a military-grade VR simulation?! (Oh Savant, you… shouldn’t have…) The plot is rather unimportant, but the writing is definitely charming, and you may find yourself buying into the scenario alongside Boki as you get deeper in. Some of the later cutscenes are pretty cool, and elicit quite a response when you realize that Boki is using her powers in more sophisticated ways. There’s also a massive amount of lore that you can find in both the glossary section of the game and the official lore blog, but I’ll leave that to your discretion.

Now for the real meat-n’-potatoes: the gameplay. Copy Kitty is a 2D action-platformer consisting of basic platforming through single-room levels and shooting specially-marked enemies. Boki can aim anywhere around herself, double jump, dodge roll, kick to destroy or reflect enemy bullets and dig through certain material, and drill kick by pressing a downward direction and kick in the air. This all sounds fairly standard for a Gunstar Heroes or Contra-like, but that’s leaving out the game’s core conceit: power copying.

Making a comparison to Kirby or, again, Gunstar Heroes would be easy, but there’s more than just idle emulation going on here. Boki can absorb and store up to three different powers as ammunition, and can shoot them one at a time (using one button to shoot and two others to cycle or three buttons to shoot, depending on your control scheme). She can then fuse all of the powers into a single new shot type, taking elements from all of them to create something new and exciting. And believe me, it is exciting. The game’s limited ammunition and variety-based scoring systems encourage you to frequently switch which powers you’re using, and different levels come with a different set of base powers, so you’ll be seeing new shot types throughout your first playthrough and beyond. The game does take care to tell you how many shots you have left for both your single and combined weapons, and it represents weapon energy with bars on your HUD, so you are well-informed about your ammo at all times. And of course, since some weapons are better than others, different combo shots drain ammo at different rates. All in all, there are 10 base shot types, and 175 different weapons for Boki alone. Yes, Boki alone.

That brings us to the true beauty of Copy Kitty: the fun. Never. Stops. After you beat the first world of Boki’s 12+1 world campaign, you unlock Savant. I strongly advise you to wait until after beating Boki’s story to play as him, because his story acts as a prequel to Boki’s, and he does not share a single action with Boki, sporting his own complex turret-based gameplay style and a new set of defensive and mobility options. He has almost 100 of his own weapons. Also, he’s always flying. Like I said, not a single action shared. After you beat one of their campaigns, you unlock Hard Mode for that character. It has a sequel story to the previous one, new enemies, new levels, new bosses, and, uh, it is mercilessly difficult. I’m talking minibosses as normal enemies in the first level. It’s really satisfying to get through though, and you get a fixed number of level skips if you just want to progress.

But that’s not all! There’s also a second primary mode called “Endless Mode”! It’s not actually endless, but it’s meant to evoke an arcade feeling via a gauntlet of 100 randomized enemy waves across an assortment of environments with different hazards. Every fifth wave is a miniboss and every tenth wave is a boss and clearing these nets you a health boost and a checkpoint. Reloading sets your score to zero, and there’s a couple of unlockables dependant on Endless high scores, so get crackin’! It has its own sub-modes and hard mode, too. And of course, compared to Story Mode, there’s new enemies, new levels, new music, and new bosses! It even has a cross-promotion unlockable bonus world for Boki’s Story Mode! Would you believe me if I told you that this was originally meant to be the primary mode?

In both its Story escalation and content roll-out, Copy Kitty is a master of ever-growing hype. It keeps things smoothly rolling with a dynamic soundtrack that keeps playing across levels and fades into what it needs to be when the need arises. The game keeps track of a massive number of small, unimportant statistics like the number of explosions you’ve caused or the number of penguins you’ve kicked in a single session. These sorts of things can be referenced in Story dialogue, or by Savant when he shows up to say a few words as you close the game. The soundtrack is fantastic and can be accessed in a sound test, as well as bought separately. There is a metric butt-ton of unlockable modifiers, ranging from visual modifiers to entirely new characters. There’s even a level editor with Steam Workshop integration, and you can do some very silly things in it!

Last of all is the visuals and performance. The game goes for a simple art style for character models, and a much more detailed cyberspace look with its floors and backgrounds. I think it looks nice, but to each their own. Of some contention, however, is the massive amount of bright lights and particle effects that can quickly fill the screen. I enjoy it and play with the game on its default (high) settings, but others may want to turn down the brightness and particle density in the options. Regardless, even on the highest settings, the game runs very smoothly, and its filesize is impressively small.

There you have it! Sporting a progression and score framework similar to that found in a Platinum or Treasure game, Copy Kitty is an excellent action-platformer that is at once both familiar to those who like action games and a memorable experience all to its own. It, as well as a fairly large demo, is available now on Steam and Itch.io. I recommend it to novices and veterans alike. Now get out there and blast some robots!