Those who know my work will know that I absolutely love horror games. Every October, I like to go on a marathon of spooky games. This year, the tradition became compromised by the October release of Paper Mario: Color Splash, but there was a spooky level in there, so I’ll let it slide. Last year, I discovered Corpse Party, the interactive novel that, aside from a few personal gripes with the tone, was actually pretty spooky. Well, just in time for Halloween, Team GrisGris’ update of Corpse Party: …Repeated Fear has made its way to the 3DS, and is even better than before!

If you’ve read my review of Corpse Party last year, feel free to skip this bit, but for those who didn’t (or don’t want to) here’s a quick recap of the story:

Eight unlucky high school students and one unlucky TA get caught in some ghostly mishaps after they perform the Sachiko Ever After ritual, which is supposed to bind them as friends forever but instead traps them in the spookiest alternate dimension imaginable. Our heroes have to unravel the spoopy mysteries before the vengeful spirits of murdered children pick them off one by one.

The story in Repeated Fear is shot-for-shot identical to the previous iteration, as is the gameplay, but that’s not a bad thing since it’s a good story and a well executed game. What separates the 3DS version of Corpse Party from both its predecessors is its presentation. The 3DS Corpse Party has been recreated almost from the ground up with improved environments, character models, and visuals that add an extra layer of fear to the whole thing, better adapting the interactive novel to a visual medium. 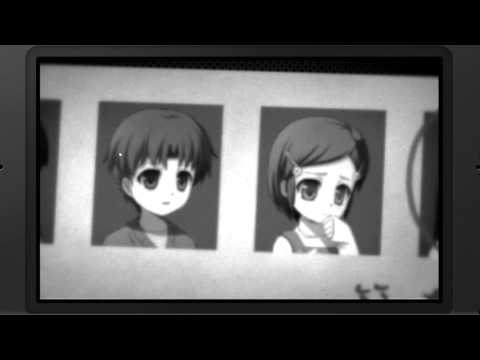 Extra details like full character profiles that emote and add body language brings much more visual depth to the characters, and the addition of detailed frames and semi-animated cutscenes make the game more striking and unnerving. Even the music has been improved, and while I still feel it shifts the tone a bit, it feels more thematically appropriate (like how “Thriller” feels like a horror-themed pop song).

My only gripe with Corpse Party’s presentation is how it didn’t incorporate the 3D in any real way. One thing I’ve anyways enjoyed about top-down perspective games on the 3DS is how they create this unique aesthetic—almost like a board game come to life. Without it, Corpse Party feels noticeably flat.

There’s honestly not much more I can say about it without repeating everything I’ve already said in my previous review. Corpse Party on 3DS is an improvement on an already excellent game. If you’re looking for something spooky to play for Halloween, this is definitely worth a purchase.

Corpse Party on 3DS is an improvement on an already excellent game.
REVIEW SCORE
8
File Under: Marvel, XSEED