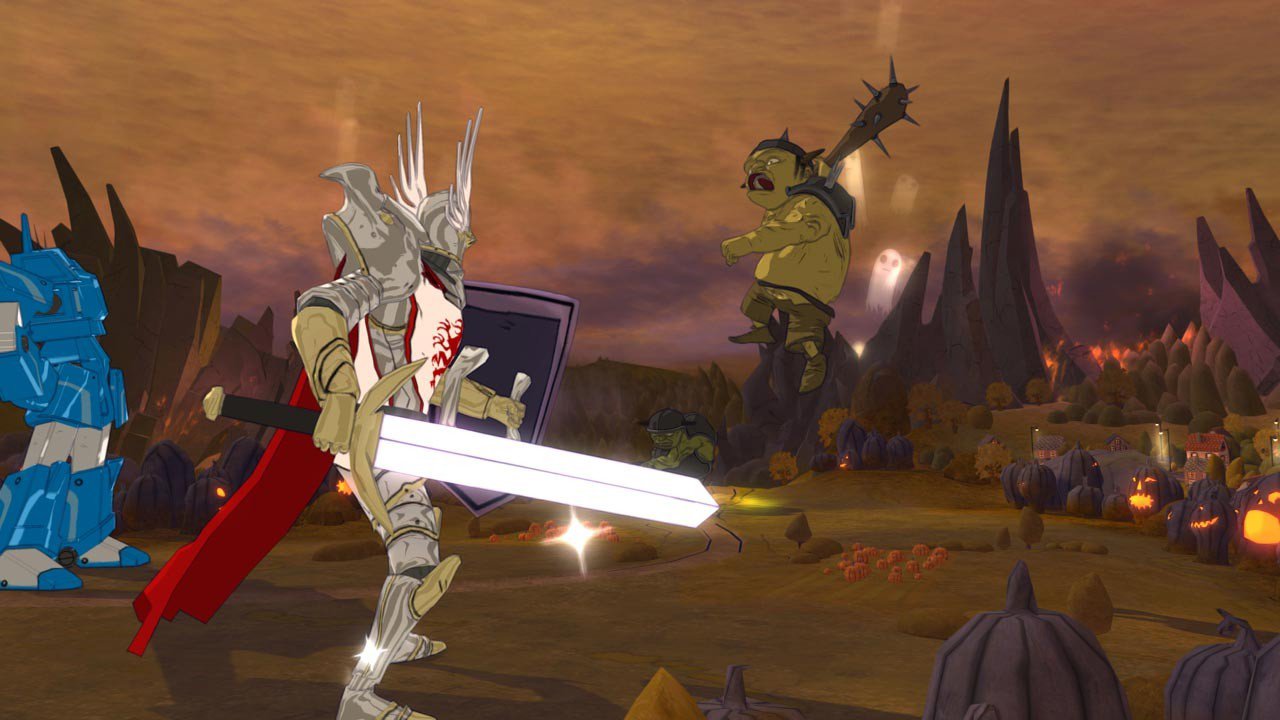 After two critically adored yet commercially dubious AAA releases, Double Fine is kicking off a new development chapter with the release of Costume Quest, a lower risk (and lower budget) downloadable RPG about one particularly harrowing Halloween. The new approach would seem to be for the better, as the game may be the studio’s most internally coherent project to date.

Costume Quest opens as fraternal twins Wren and Reynold are preparing to embark on their annual trick-or-treating adventure. You can choose to play as either sibling knowing full well that whichever one you do not choose will immediately be kidnapped and serve as the game’s McGuffin.

The plot, serviceable as it is, goes something like this: Cadaverous Big Bones, the ruler of Repugia, has instructed his minions to gather up all of the Halloween candy in town to feed his insatiable appetite for sweets. Your sibling – inconveniently dressed as a piece of candy corn – is the crown jewel of the evening, and even though brothers and sisters are completely icky and gross, you have to rescue yours to avoid getting grounded.

The solitary operation eventually becomes a group endeavor when Lucy and Everett join your party, although the characters are little more than warm bodies with regards to gameplay. The game is called Costume Quest, so everything – from your abilities to your character stats – is determined by your costume.

To elaborate, Costume Quest inhabits the imaginative childhood belief that Saturday morning cartoons can somehow become reality. Whenever you enter a battle, your costumes become real as your characters transform into giant robots, knights, ninjas, unicorns, and more as you prepare to do battle with the monsters of Repugia.

The resulting blend of fantasy, youth, and nostalgia is populated with rosy-cheeked and rambunctiously adorable children, and the colorful kid-friendly aesthetic is difficult to resist. Bolstering the appeal is a darkly comedic undercurrent that adults will appreciate and Double Fine fans will love, and the unique combination of cute and morbid ultimately sets Costume Quest apart.

The actual RPG mechanics, on the other hand, are disappointingly conventional. You wander around a world map talking to NPCs, completing side quests, and battling monsters during rigid turn-based encounters, and there’s nothing even remotely innovative about the gameplay.

In fact, Costume Quest is so streamlined that it’s hardly recognizable as an RPG. There are no items, no real character classes, and virtually nothing in the way of character customization. Each costume boasts only one basic attack and one special attack that charges up over the course of a couple of turns.

Choice is restricted to your costume selection – which can’t be changed during battle – and Battle Stamps, which are collectible accessories that bestow your character with additional abilities. Counterattacks, regeneration, and stun attacks are certainly useful, but you can only equip one stamp per character, so your options are still extremely limited.

Fortunately, the gameplay is surprisingly well balanced given the lack of complexity. Every battle is independent – there’s no persistent damage – and any enemy is capable of inflicting a lethal amount of punishment. Most encounters are pure wars of attrition, and while the game isn’t difficult, the fights are fair and the fast-paced quick-time action is dynamic enough to be engaging.

The simple gameplay may even be to Costume Quest’s advantage. Double Fine excels with humor, character, and presentation, so the straightforward controls make it easier to soak in the sugary goodness that oozes out of every frame.

Turning to some of the other aspects of the game, most of your non-combat time will be spent trick-or-treating. There are three main in-game areas – a suburban neighborhood, a shopping mall, and an autumn carnival – and the gate to the next won’t open until every house is cleared of candy. You’ll consequently have to go door to door demanding saccharine handouts from kindly grown-ups and (occasionally) from malicious grubbins lying in wait with an ambush.

Meanwhile, side quests like hide and seek, bobbing for apples, and card collecting add to a laundry list of entertaining Halloween-themed activities, while costumes with built-in features help you explore otherwise inaccessible areas. The robot costume, for instance, utilizes roller skates to coast at high speeds, while the spaceman costume comes with a beam sword that illuminates dark places. All of the toys put you in the mindset of a child with boundless imaginative potential, and it’s fun to relive the October holiday with innocence instead of cynicism.

Costume Quest is indeed so immersive that it can feel significantly shorter than it actually is. The game takes place over the course of a single Halloween evening, and the breezy plot leaves a relatively light impression. That said, collecting all of the costumes and completing all of the side quests will consume between seven and eight ours of playtime, and that’s perfectly acceptable for a $15 download.

Unfortunately, Costume Quest is missing a few features that are noteworthy in their absence. For one thing, there’s no voice acting, and that’s a bit of a letdown given the importance of the comedy. The writing is still solid as long as you’ve got your reading glasses, even if the situation is somewhat less than ideal.

The lack of a manual save function is a more troubling concern. The game auto saves at predetermined plot points, but that’s little consolation when you have to redo some grinding in order to get back to where you were.

Finally, Costume Quest doesn’t provide you with any maps. The levels are small enough to make it a forgivable omission, but coasting through suburbia looking for the one house you missed can be a little aggravating when you have nothing tangible to guide you.

Despite those problems, Costume Quest nonetheless feels like a step forward for Double Fine. The game showcases all of the things that the studio does well and the inoffensive gameplay is never onerously distracting. Like a bite-sized piece of candy, Costume Quest is a sweet, fleeting concoction guaranteed to put a smile on your face, and sometimes its OK to indulge in a few empty calories.

Costume Quest opens as fraternal twins Wren and Reynold are preparing to embark on their annual trick-or-treating adventure. 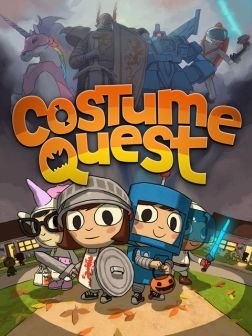