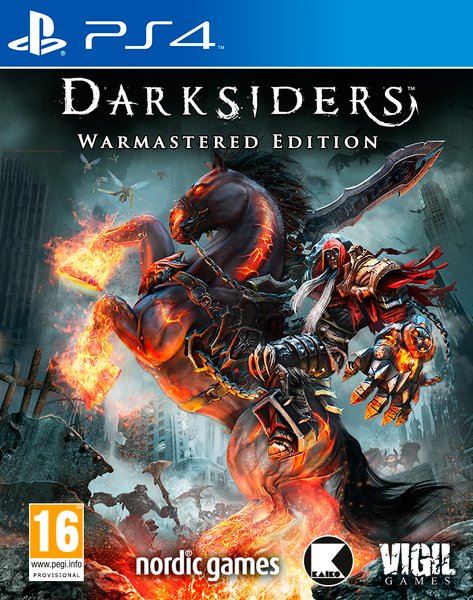 Darksiders is one of those franchises from the last generation of consoles that is either extremely underrated or overrated depending on who you talk to. Taking inspiration from Nintendo’s The Legend of Zelda franchise, this series gave fans a more adult version of a formula that is hard to copy. For its time, it was pretty popular, and that would explain why we keep getting remakes. To be fair, Darksiders II is the game that tends to find itself on every console possible, most recently making its way to next gen platforms with the Deathinitive Edition even before its predecessor, but now Darksiders: Warmastered Edition is here and, well, it’s kind of the same.

There’s a weird feeling when going back to the last generation of videogames I’m still not quite used to, and a lot of that is because the industry has moved past certain tropes that seem out of place in 2016. So with that in mind, remember that what is cheesy now was really cool at the beginning of the decade, like Empire State of Mind by Jay-Z and Alicia Keys.

Playing as War, one of the Horsemen of the Apocalypse—a brooding, monotone, muscle bound, Marcus Fenix male archetype that was pretty common back in 2010—players smash and slash their way across a post apocalyptic city. He was tricked to come to Earth, the realm of Man, believing he was summoned. Upon arriving, he realizes he is the only Horseman of the Apocalypse to show up and is accused of disrupting the balance of the realms (the other two being Angels and Demons).  War pleas to the council to allow him to get to the bottom of this and is granted the right to investigate. And by investigate I mean he beats the snot out of everything around him. Yes, there is a heavy emphasis on dungeon crawling and upgrading gear like The Legend of Zelda, but,in many ways Darksiders: Warmastered Edition has a lot in common with titles like Castlevania: Lords of Shadow aesthetically.

But this isn’t 2010 anymore, and while THQ Nordic can’t go back and change the story of the game now, they did what they could to update other aspects of Darksiders. To put it bluntly, this six-year-old title will need more than a facelift to at least keep up in today’s high quality marketplace. Visually, some of the landscapes are cleaned up and cutscenes look clearer, but there are still signs of age on this title. I got a pretty good chuckle seeing these high res humans running away from explosions while moving limbs like they’re puppets. Gameplay is cleaned up a bit too. War controls just as I remember, and combat feels fluid enough most of the time, because for the most part, the initial Darksiders was a pretty clean-cut game in that department. There are aspects of the game that show their age, like throwing projectiles or dealing with the camera which could have used a complete overhaul, but this is a smaller re-release than something like the Uncharted: Nathan Drake Collection.

In many ways I wonder if Darksiders: Warmastered Edition, along with Darksiders II: Deathinitive Edition are tests to gauge the interest in the Darksiders franchise long after the series faded from popular consciousness. If that’s the case, I’d rather THQ Nordic put more of an effort into their offerings. For the long time Darksiders fan that spent weekends in high school playing this title after renting it from Blockbuster (like me), it’s a nice trip down memory lane. But a lot has changed in the half-decade since its initial release, and some of those remnants are hard to stomach at times and could really use a new coat of paint. Yet, for what it is, there’s a fun experience underneath it all, and it makes me kind of miss the series.

Darksiders: Warmastered Edition only works if you look at it as a time capsule of a bygone era.
REVIEW SCORE
7.5
File Under: Darksiders, THQ Nordic, Zelda