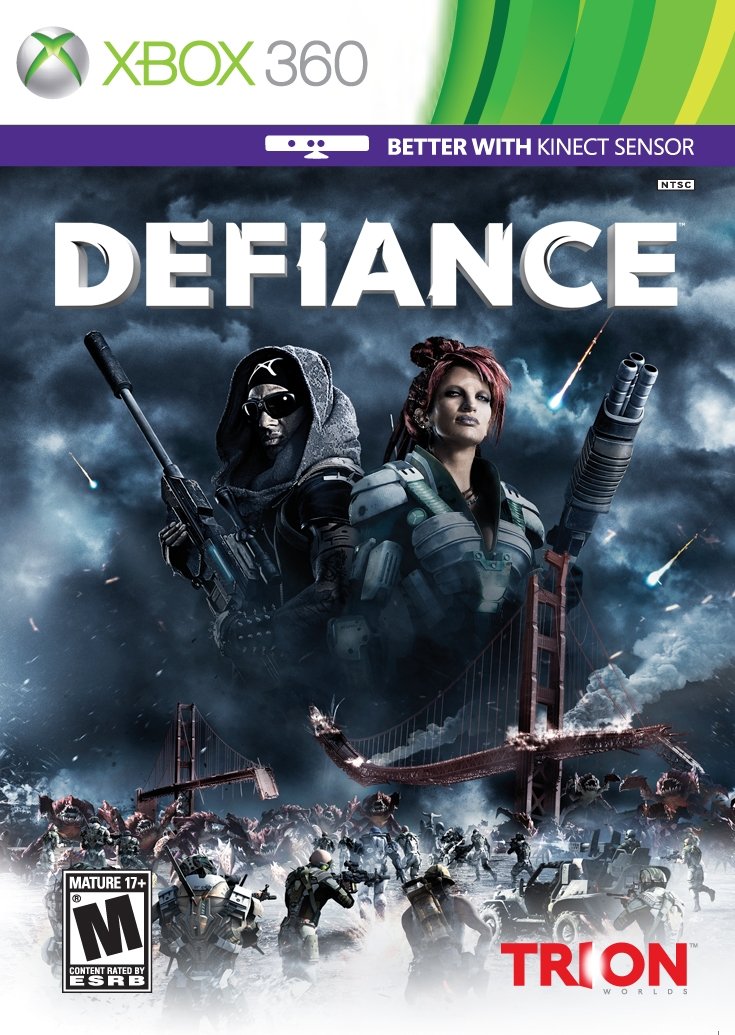 If you haven’t been following the development of Defiance, roughly two years ago the SyFy channel finally got the ball rolling on their dream to create a trans-media event. They made a single universe split down the center of your television screen. Coming in through the cable box is a weekly, hour long science fiction show about a human-alien colony trying to survive in a dystopian version of St. Louis. But there’s also a game, a MMO 3

About 30 years before the start of the show, a collective of alien races showed up on Earth’s doorstep to spend the rest of eternity sleeping on Earth’s couch. This collective is not an army, but refugees of a disaster that caused them to abandon their own home. Fast forward to the start of the show and you’ll find yourself cast in the role of an “arkhunter” trying to survive on a partially terraformed Earth by salvaging the falling debris of the alien spaceships (which are known as arks).

At least that is what I was able to piece together by reading Wikipedia and other websites unaffiliated with the Defiance trans-media event. This brings us to the major problem of this game. Defiance, as an MMO without any other trans-media assistance, doesn’t really explain all that much about itself. On numerous occasions the game will bring up something important and then just drop the whole subject like every school kid has known about it since the third grade. Does anyone know if the Battle of Defiance is a big deal? I have a feeling that this and every other plot hole will be explained once we’ve all watched half a season of the show, but right now it’s really frustrating to play a game who’s characters (and their motivations) won’t be fully explained until some unknown date past the show’s release.

To make matters worse, the game doesn’t really do a great job of explaining itself either. Now to the credit of Trion Worlds, they went as far as having their actors verbalize a lot of information about almost anything and everything in the game, but in this case the issue is also a matter of timing. For example, during one of the main missions, a flying insect called an Archer suddenly appeared, and the game went into great detail about the bugs weak points. Thanks Defiance, but that was something you might have mentioned before I had already taken down a few dozen Archers in some of the “arkfall” events which light up the map like a big-box store during Christmas.

In another case, the game told me everything I needed to know about my avatar’s hat collection the second after a friend showed me how to buy them from the strange looking machines in the first town. Also, I am still not sure why my character’s level rating increases nonsequentiality. The list of examples goes on and on, and to be honest no single one really destroyed the experience for me; however, it does become frustrating when you add the list up.

The systems that run Defiance get even murkier when you realize that console versions split a number of the of game’s systems between the game’s infrastructure and that of the console. This sharing of duties just blurs the whole picture even more, and you’re left to figure out which infrastructure handles what duty.

Now for those of you who are worried that this is just a marketing tool in disguise, I can say that your fears are misplaced for the most part. Yes it is a market tool (with no subscription fee I might add), but the game really is a true MMO, filled with server queues, damage numbers, dancing, and even a watered down character creator. That being said, I could understand if you didn’t recognize it as an MMO at first glance. The controls are very tight, and while no one will confuse them for Call of Duty you get the feeling that you’re really responsible for the damage you deal. Unlike World of Warcraft, where your character repeats the same animations over and over while damage numbers fly past, in Defiance you only get critical damage numbers when you get a head shot. Miss completely and you get no damage points at all.

If you judge MMOs by the player count, than the game gets its massively multiplayer on during communal events called arkfalls. These are huge, randomly timed events that feature players trying to crack open ark debris while fending off hordes of alien bugs. You can do arkfall events as soon as the game lets you out into the open, but at that point you may have no idea what big bugs have to do with fallen debris. I would suggest you just go with the flow, and enjoy the fact that these events have a really cool Starship Troopers vibe to them. I should also point out that these arkfall bugs have a tendency to pop in and out. The popping is now massively better due to various patches from Trion Worlds, but it still does happen from time to time.

The less massively multiplayer story missions that the NPCs send you on are instance-based, and the game will seamlessly separate you from the nearby players who are not on the same quest. Luckily, the game will also add in players that showed up half way through the instance you’re working on. I enjoyed that because tough missions got easier when more help arrived, but the game also has a tendency to add my character to the next instance of that very same mission. That’s not an issue until one of the missions is located in one of the towns and all the shops disappear until all the instances are over… or you reload.

These instance-based missions are also broken up into the main missions, episode missions, and side quests. The main missions tell a story that seems to be unique to the game by having you go from one area to the next and shooting many things. The episode missions feature your avatar teaming up with digital versions of the TV show’s cast to hunt down ark debris and make your fortune. These main and episode missions are clearly the centerpiece of the game since they’re full of narrative cut scenes voiced by the cast of the TV show. There are also a lot of quick side quests spread across the world that usually involve tagging, rescuing, or shooting something. You can even get your PvP on in a variety of independent instances that look more like Gears of War or Left for Dead than World of Warcraft or Star Trek Online.

Defiance isn’t a bad game; actually the game’s systems are well put together, but it is unfortunate that you’ll have to go through so much trial and error to figure them out. Also, thumbs up to Trion Worlds for all the narrative told through cut scenes. However, in the end, it is Defiance’s sense of timing that is its own worst enemy. When it’s not messing up the stage cues that should start its tutorials/background information, it is pointing to a TV show that doesn’t exist yet to do a lot of heavy narrative lifting. The whole mess drove me to treat this game like a generic 3

person shooter I could play online with friends, and I actually started to have a lot of fun when I ignored the universe and just did that.

Defiance isn’t a bad game; actually the game’s systems are well put together, but it is unfortunate that you’ll have to go through so much trial and error to figure them out.
REVIEW SCORE
7
File Under: MMO, PC