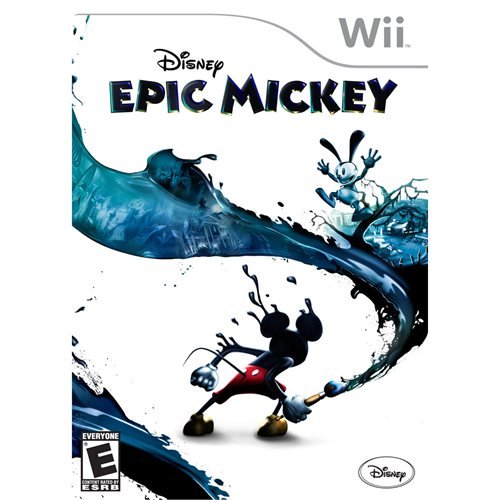 At a glance, Disney’s Epic Mickey is a standard platformer in which you play as a well-worn character and double jump your way across a variety of 3D landscapes, but that doesn’t even begin to capture the complexity of Warren Spector’s latest project. Epic Mickey is a truly unique game that simultaneously rejuvenates an iconic hero and breathes new life into a retired Disney history.

Epic Mickey begins when Mickey accidentally knocks over a bottle of enchanted paint thinner and unleashes the Shadow Blot on Wasteland, a magical realm populated with a variety of forgotten Disney characters. Once Mickey becomes trapped in that world, he has to make amends for his mistake and find his way back to the land of the relevant.

Along the way he’ll join forces with a tiny guide gremlin named Gus and Oswald the Lucky Rabbit, the de facto ruler of Wasteland. Oswald happens to hold one hell of a grudge (you might want to Google it), and is not too happy to have Mickey shaking things up at home.

With such a premise, Epic Mickey is far darker than anything you’d expect from Disney. Wasteland – with areas like Mickey Junk Mountain and Mean Street – is a somber dystopia surrounded by oceans of deadly green sludge. The character design dates back to Mickey and Oswald animated shorts from the 1920s and 30s, and much of it will be wholly unfamiliar to younger (and even older) generations.

Fortunately, the game’s subtle humor and warmth offset the bleak obscurity and make for a highly original adventure. Spector’s Mickey isn’t the sterile mascot that sells hats to tourists in Florida. Instead, he’s a happy-go-lucky individual with a genuine personality that is at once innocent and mature without being overly cute or cynical.

The core gameplay, on the other hand, is generally unremarkable. The levels are functional, the jumping is serviceable, and there’s more than enough diversity to make the game’s 12-15 hours worthwhile. Projection screens serve as portals to the various areas of wasteland and break up the 3D exploration with some creative 2D platforming sections set inside classic Disney cartoons.

Epic Mickey stands apart thanks to an incredibly intricate mission structure that emphasizes player choice. As you explore Wasteland, you’ll encounter a series of NPCs in need of assistance and your actions will influence your relationship with the world around you. If you help the people of Wasteland, the other characters will reciprocate your kindness. Should you opt to be the mischievous prankster, you’ll find a chillier reception and mistreated characters can be lost forever.

From a game design perspective, the results are fascinating. The “right” answer isn’t always obvious so every decision has real weight and the consequences are far more meaningful than the somewhat arbitrary moral choice systems that have become popular in many action games. Here, choice isn’t a gimmick. There’s usually more than one way to proceed and many puzzles can be completely bypassed if you do a little exploring.

The game’s central paint/thinner weapon mechanic underscores the entire system. Paint is a constructive material that makes platforms and structures miraculously appear, while thinner is the destructive counterpart that makes things disappear. You’ll need to use both to navigate the environments, as paint can create paths to out-of-reach areas and thinner can expose the dozens of hidden nooks and crannies scattered throughout the game.

The combat mechanics feed into that duality. Spraying evil Ink Blots with paint will convert them to your cause, while thinner unmakes anything it touches, a bit like the anti-toon material from Who Framed Roger Rabbit.

Of course, Epic Mickey is a platformer, not an RPG, so there’s no character customization and everything takes place within a largely linear framework. Even so, Epic Mickey can still surprise you after more than fifteen hours of play, and you won’t see everything during a single run.

As good as the level design may be, Epic Mickey stumbles with some of the more mundane aspects of development. The game isn’t always “fun” as much as it is “interesting,” and there are some serious technical shortcomings that may deter many players.

The biggest problem is the unfriendly camera, which seldom captures anything you’d like to look at.  It’s impossible to focus on enemies during a skirmish and standing near a ledge or a building will draw the camera in tight so that you can’t see anything at all. You’ll have to make way too many blind jumps and contend with a less-than-ideal view of the proceedings.

The imprecise paint/thinner mechanic similarly leaves something to be desired. Holding the Wii cursor over your intended target is no guarantee that you’ll hit whatever it is you’re aiming at and thinner is often a bit more effective than paint. One touch will erase the floor you’re standing on, but you can’t make anything reappear until you move out of the way.

Combat – and even some of the platforming – can also be a bit of a nuisance. Your recovery time after injury is agonizingly slow, so it’s way too easy to get stuck in damage loops where you’ll get hit four or five times in rapid succession.

Finally, the nature of the game – namely, the fact that literally any wall or tree could be housing hidden compartments – makes it easy to overlook many of the details, and the nearly complete lack of clues can make for some extremely frustrating scavenger hunts. Trying to finish side quests can be a needlessly time-consuming challenge.

Yet despite the flaws, I’m left with an overwhelmingly favorable impression. There’s so much going on (it even defies description) that the game is inevitably engaging and never boring, as if Junction Point is running a clinic on conceptual design, and the mediocre execution isn’t enough to cloud the outstanding presentation.

Unfortunately, that’s a largely subjective opinion and the lack of an obvious audience makes Epic Mickey a tough game to recommend. Not everyone is as much of a Disney-phile as I am and younger children (or casual players) may not care about some of the subtler aspects of the design. It’s worth a look if you’re into game development, but it is a hardcore title and it’s probably not for everybody.

It is, however, a worthy addition to the storied careers of both Walt Disney and Warren Spector, you should definitely give the game a chance. You won’t play anything else like Epic Mickey this holiday season, and that alone should warrant your attention.

You won’t play anything else like Epic Mickey this holiday season, and that alone should warrant your attention.
REVIEW SCORE
8
File Under: Disney, Epic Games, Nintendo, Ubisoft, Wii