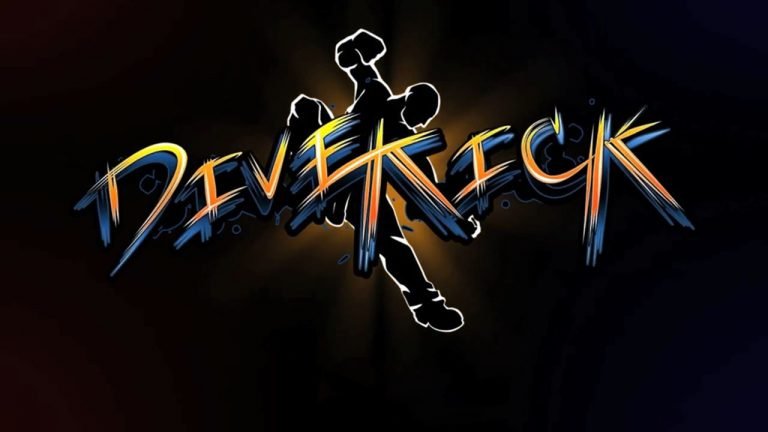 Divekick is a strange beast. More strange than first-hit-wins, it’s two button controls (one being jumping, or ‘diving’ into the air, the other being a kick), or odd storyline is the fact that this game was even made in the first place.  Divekick is so deeply entrenched in the labyrinthine-like culture of the fighting game community that the fact it ever surfaced as a fully featured XBLA, PSN and Steam release is incredible. To take it one step further – why Iron Galaxy thought it would be a good idea for such a wide release is almost entirely confusing. Despite all of that, I’m glad they did.

To appreciate Divekick the players will have to understand a few basic tenets of the FGC. ‘Divekicks’, firstly, are a type of move commonly found in fighting games. They’re fast, advantageous, and characters with them are typically strong.  Characters with a divekick usually revolve around the move. In Divekick every character has said move. In fact, it’s their only move. Secondly, the Fighting Game Community (FGC) thinks it’s a secret club, where the old guards over-watch everyone else, and you need a to know a special handshake to confirm each other’s OG status.  Divekick pulls from this long history of community memes and ultra specific in-jokes to make players laugh. It’s self aware, and a very clever lampooning of the very genre it belongs too. This satire alone makes the game worthy of accolade. However, the layman won’t understand the value of the endearing commentary found in Divekick.

I found as much enjoyment in reading the hints from ‘Uncle Sensei’ – the game’s teacher figure, and the witty quips from the all-star cast of characters (many of which are drawn from real-life counterparts) as I did from the gameplay. The fighting mechanics are snappy, simple to understand and chaotically entertaining. The array of characters iterate on the simple one move mechanic well and to those who invest time into it, there is real strategy to be found.  Players who are better at reading their opponents than hitting 1/60th of a second frame windows will find a game that fits their style. And you can take that style online with fighting game standard GGPO driven multiplayer.

I love the fact that Divekick was made, and that so much effort went into a game that was originally conceived as a well executed joke. It’s already a classic, and well engraved on the walls of the FGC pantheon – but to the rest of the gaming world Divekick just doesn’t make any sense. It’s a shame – but it’s pretty fitting and par for the course as far as fighting games are concerned. After all, if Divekick was to get too popular, the FGC wouldn’t be the secret clubhouse that it is.

I love the fact that Divekick was made, and that so much effort went into a game that was originally conceived as a well executed joke. It’s already a classic, and well engraved on the walls of the FGC pantheon - but to the rest of the gaming world Divekick just doesn't make any sense
REVIEW SCORE
6
File Under: