Another Session in the Literature Club 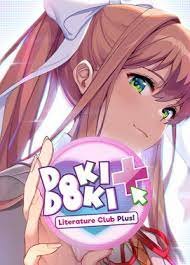 Doki Doki Literature Club Plus! can be described as a harrowing tale of psychological horror that will leave the player in a fugue state of “what just happened?” while maintaining a façade of a happy-go-lucky dating sim with very upbeat music and visuals.

This interactive graphic novel puts the player in the shoes of the nameless main protagonist-kun, who has a heavy interest in anime, manga, and cute girls. Upon running into the most cliché of anime stereotypes,  your childhood friend Sayori strikes up a conversation with you about joining the school’s literature club, which she assures you is a good time. Even though the whole “childhood friend” cliché is commonplace, this is a welcome occurrence as it doesn’t leave the player or main character wandering without direction.

Up to this point, the gameplay consists of reading the dialogue and laying down the landscape of the environment with detailed characters and fresh artwork. The music is heavily notable here, as it changes with each subsequent screen the main character visits.

The beginning of the game can move quite slowly and become cumbersome, but the background and detailing of the small world are necessary. When making it to the titular Literature Club, you are introduced to three more classmates that are all female anime tropes. You have Yuri, who is the dark and brooding type yandere who buries herself in the literature aspect of the club. The next is Natsuki who is cold towards the protagonist in a Tsundere type anime role. And finally, Monika. Who is the Ace student, athlete and model of character perfection, who acts as a tension breaker.

With only four characters to interact with, the development of each provides layers of intricacies that show depth and humanity to each. The player makes minor choices in the mini-game which will affect the narrative during your playthrough. For example, a small mini-game where the protagonist will have to select words to form a poem which can resonate with each character.

The cute words like “fluffy” will resonate best with Natsuki, while the darker words like “melancholy” resonate best with Yuri. The creators took great care with this aspect, and the poems are all unique and well written.This detail in the game cannot be overlooked as the poems give further insight into each character’s mental state. The complexities and issues of each of the main characters are written very well, and it is undeniably believable when they play off of one another.

Under the cheerful  music and the atmosphere of a literature club doing its thing, hides something incredibly sinister under its surface. The bright atmosphere and the disguise of a dating simulation convinces the player to let their guard down, and the moment that happens, events unfold that seize the player with terror in what could be regarded as the most startling imagery seen thus far.

The trigger warnings the game gives on the title screen are well noted when the player arrives at this shocking event. The cryptic music that remixes the happy theme heard throughout the game during this scene is haunting. The self-awareness of the narrative is prominently featured. After a certain point, I wanted to quit the game, and when I decided to keep going instead of quitting, I hit the “no” option, and an Xbox Achievement notification popped for not quitting. The game rewards you for choosing to not quit—horror at its finest.

“As an indie game that is designed to shock and terrorize the player, few games can stand with Doki Doki Literature Club + on the same ground. “

This game is best enjoyed when you go into it with no expectations and no spoilers. It constantly takes jabs at video game culture, breaks the fourth wall profusely, and provides commentary to the player in many ways.At one point a character says, “Maybe I just feel a little insecure because you’re playing this game in the first place,” making immersion so much more prominent in the game.

As an indie game that is designed to shock and terrorize the player, few games can stand with Doki Doki Literature Club + on the same ground. The anxiety-inducing scenes where you know a harrowing event is about to take place is done with expert flourish, and the emotional toll it takes on the player doesn’t let up even when the credits roll.

The game has 3 endings,  one being the ‘good’ ending, but the player will have to tread DDLC+ carefully to obtain all three..

The Plus edition of DDLC contains a swath of new features and content that is sure to make any enthusiast happy with a re-release. There are nownew character artwork slides, and a way to listen to the soundtrack on the home screen.. The most notable addition are the six prequel scenes that are included with the game, detailing the relationships between the characters before the main protagonist is introduced into the story. This gives a fresh look at how these four literature club members met and relate so well.

Although this visual novel contains many striking scenes—and heavy content material—the title does well to warn the player before they get in too deep. There is also an option included that gives warnings prior to each horror type event before they unfold, allowing a wider variety of players to enjoy the game.

Overall, Doki Doki Literature Club Plus! is a unique, refreshing game that has stunning artwork and creates an immersive atmosphere that is sure to grip the player at all stages of gameplay. Not many games can boast about their horror aspects, but DDLC+ embraces its nature fully and does things with its narrative and the horror genre that not many other games can claim.

The music tracks add to the gameplay elements, constantly jarring the player and fitting each scene perfectly. However, the gameplay is limited, so those looking for more control over the narrative might not be able to dive into this one. Players who are easily disturbed by horrifying imagery should also take a pass, as the game itself recommends. These small shortcomings aside, Doki Doki Literature ClubPlus! is a horror masterpiece that will have a cold grip on the player that only tightens as you fall deeper under the game’s spell.

Recommending this unique title is easy for all game enthusiasts, but it is a MUST PLAY for players who enjoy terrifying experiences. DDLC+ is a welcome return to the Literature Club for fans, and an ideal starting point for new players.

Doki Doki Literature Club Plus! transcends its visuals and becomes its own unique entity, shattering any limitations set by previous entries in the Anime Dating sim genre, and the Horror genre. This game should be experienced by any game enthusiasts that can stomach the heavy subject matter.
REVIEW SCORE
8.5
File Under: