Duels of the Planeswalkers 2012 Review 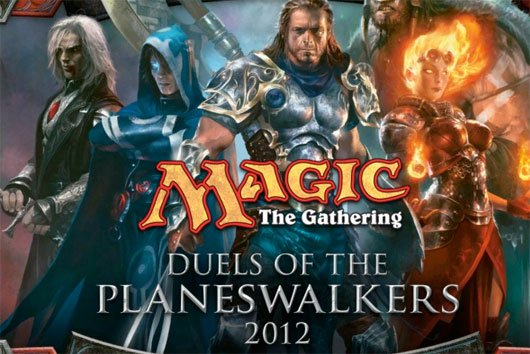 Magic: The Gathering has been around for many years. I was first introduced to the world of powerful spells, big beasts, and deadly dragons during my middle school days and have had an on again off again relationship with the game. Not being much of a tournament player I would often have a very hard time finding matches. That was until I saw Magic: The Gathering Duels of the Planeswalkers make its debut on PSN. I instantly fell in love with it and was really impressed that developer, Stainless Games, had succeeded in capturing the mechanical genius that is Magic: the Gathering. There wasn’t much style or flash but the mechanics were solid. Fast forward to now and Stainless Games has just released the 2012 edition of Duels of the Planeswalkers with new decks, match types, a complete visual overhaul and most importantly the mechanics I have come to know and love.

In Duels of the Planeswalkers 2012 you will fight through two single player campaigns, the latter being the same as the first except your opponents are a lot more challenging. This time around Stainless  Games has added a co-op campaign where you and two other allies will take on the AI in an Archenemy match, which I will explain a little later on. All in all, the new decks, three levels of difficulty and the ability to remove any card from a given deck players will find lots to keep them busy.
One of the most noticeable additions to the 2012 edition is the story. It is minimal but it’s there if you want it, but much like relationship with the Halo or Advanced war franchises I enjoy Magic: The Gathering on a simply a mechanical level. Either way the story is really a quite a throw-away part of the game and  is only presented with the opening cutscene and small blurbs on loading screens.  Making it pretty to easy to ignore. This is fine by me, due to my aforementioned appreciation for the game’s mechanics rather than it’s story.

Online play works well can be a bit laggy at times. However, there is a good variety of match types to choose from. Match types like standard duels, two-headed giant and new addition Archenemy matches. The Archenemy matches are great in concept but suffer from some balance issues. The way an Archenemy match is set up is this: Three planeswalkers with 20 life each and all acting on the same turn face off against one rival planeswalker with 40 life and what’s called the “scheme deck”. The “schemes” are turned face up at the beginning of the planeswalker’s turn. That player than follows the directions on the card. Directions like “put five 0/1 tokens into play” Or “All other players take three damage and you gain that much life”. The main purpose is to shift the balance back towards the planeswalker facing down three opponents. Good concept, but poorly balanced. I found the “scheme cards” to be very overpowered for the purpose they are trying to serve. To maintain balance I would have just given the solo planeswalker 60 life rather than 40. I even think 80 life would have would have worked too.

Overall, Stainless Games has taken what was already in place and improved upon it in almost every conceivable way the only thing I found problematic was that since the game will recognize if you have no valid moves for that phase of your turn it will automatically skip to the next phase. This can make casting instant spells or acting in response to an opponent’s turn very tricky. You really need to hover over the “stop time button” if you plan on playing anything in this manner. The main drawback is that it doesn’t make learning this style of play very easy and it can be necessary to use certain decks to their full potential. If you’re a fan of Magic: The Gathering you’ll find lots to enjoy in this new 2012 edition. If you’re new to the game I would recommend starting with the 2009/10 version, it’s decks are far less advanced and easier for new player to figure out.

In Duels of the Planeswalkers 2012 you will fight through two single player campaigns, the latter being the same as the first except your opponents are a lot more challenging.
REVIEW SCORE
8
File Under: PC, Strategy