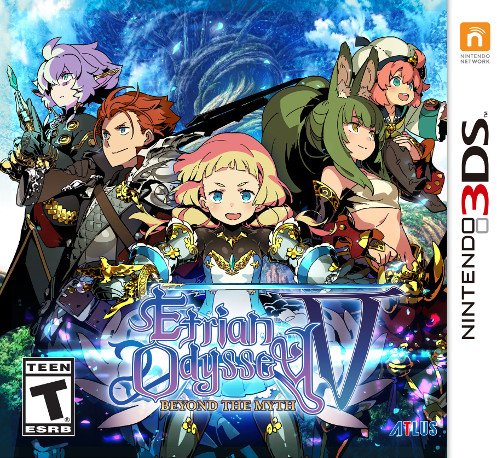 “Clearing the rubble from your path, you emerge from a narrow canyon corridor into a wide clearing. The orange bedrock beneath your feet is uneven, eroded by centuries of exposure to the razor-sharp gales endemic to this area.

The scent of moist fur and animal dung tickles your nose. You hear a rhythmic pounding to the distant east, and wheel ’round just in time to glimpse a massive, four-tusked mammoth disappear down the rugged causeway. What do you do?”

The Etrian Odyssey series hearkens back to a brand of role-playing that demands imagination, innovation, and a healthy fear of the unknown. Unlike most of its JRPG contemporaries, Etrian Odyssey has no interest in funneling its players through a linear narrative with predetermined characters. Instead, the spirit of the series lies in putting together a motley band of adventurers and striking out into uncharted territory with nothing more than the virtual equivalent of a pen and graph paper. Etrian Odyssey V: Beyond the Myth continues in this grand tradition, albeit with diminished latitude.

Whereas Etrian Odyssey III took players across vast seas and Etrian Odyssey IV featured numerous dungeons accessible by airship, Etrian Odyssey V brings the series full circle to where it began. The imposing Yggdrasil labyrinth is the one and only place players will explore throughout its lengthy campaign, and each of its six strata represent distinct biomes with their own hazards to overcome. Character customization has been similarly dialed back; subclasses and Grimoires (skills pilfered from monsters) are gone. In their stead, Etrian Odyssey V introduces four playable races, each with their own abilities, as well as ten new character classes that each branch into two specialized variants by way of “Legendary Titles.”

The character customization system in Etrian Odyssey V is less complex than in previous entries, but still provides ample flexibility in terms of party composition thanks to the hybrid nature of its classes. Fencers, for example, can be built as elemental swordfighters that strike in tandem with their allies, or as lithe evasion tanks that attract enemy attention, dodge incoming attacks, and deliver their own deadly reprisals. Rovers, meanwhile, look like the standard “archer with a pet” archetype on the surface, but can actually specialize in powerful healing abilities that leverage the soothing power of animal companionship. Crafting a complementary party of superpowered explorers is an essential facet of the Etrian Odyssey experience, and Beyond the Myth ensures that it’s as engrossing as ever.

Narrative has never been at the forefront of any core Etrian Odyssey game (not counting the Untold sub-series, which retains the traditional Etrian Odyssey gameplay template but injects it with a curated story and cast). Beyond the Myth is much the same, at least in broad terms. This time around, however, there is a renewed emphasis on moment-to-moment storytelling. As the player explores Yggdrasil, they’re bound to encounter one of countless “Adventurer’s Log” micro-events, which are non-combat feats that make use of characters’ racial abilities in inventive ways. Perhaps a character might find a wounded animal and use their knowledge of first aid to treat it, earning some small reward in the process, or use their innate affinity with mana to disarm a magical trap. These moments add wonderful texture to the dungeon crawling experience reminiscent of tabletop Dungeons & Dragons. It’s a meet-me-halfway blend of classic Etrian Odyssey freeform adventuring and Untold-style character-driven story that I hope to see replicated in future series entries.

Be not fooled by its bright and colourful visage: Etrian Odyssey V is relentlessly difficult, and yet its steep challenge is another part of its mystique. The experience of mapping its dungeons by hand on the touch screen—a series staple—only augments its imposing ambiance, cultivating a sense of danger and wonder that few games in the genre can recreate. It can also be frustrating as hell. Some foes can feel like brick walls. But they are surmountable, and failure stings a little less than it ought to with Yuzo Koshiro’s jazzy soundtrack looping pleasantly in the background. (Side note: Excising the FM version of the soundtrack that’s usually included as a free option to sell as premium DLC was not a cute move. Not cute at all.) Etrian Odyssey V successfully distills the series’ formula back down to its essence without losing anything essential in the process.