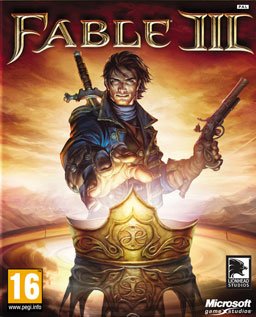 Just two years after the return of the Fable franchise in Fable 2 comes Fable 3, Lionhead Studio’s exceptional realization of the original game’s promise.  For most of its 20-plus-hour playthrough (including the hefty number of sidequests, plus there’s still plenty more to do post-game), Fable 3 maintains the reckless charm of its predecessor Beyond just delivering the best Fable game to date, Fable 3 also delivers one of the most enjoyable action/adventure RPGs of the year.

Fable 3 is, like its predecessors, built around the odd mixture of a relatively linear story and world with a free and open task structure that exists within those confine  It remains, at its core, a supremely accessible action-RPG. You still use a world map to zip around from area to area, you still roam the wildnerness/tomb/town with your trusty dog at your side and combat still consists of hitting X for melee attacks, Y for guns, and B for magic.  It certainly isn’t Oblivion or Fallout in terms of scope, but it’s definitely more than we’ve come to expect from the Fable franchise.

Talking with the citizens of Albion, completing tasks and finishing key plot points all lead to the hero accumulating Guild Seal  After completing each plot-point mission, players are transported into a section of the Road to Rule, a path on which they can spend their Guild Seals to upgrade melee, magic or ranged powers; to gain the ability to own stores and houses; to learn new Expressions; to unlock the ability for people to love you; and to learn new magic skills altogether, among other thing

This upgrade strategy lets players spend as they wish, or decide to save all their Seals until the next section of Road to Rule opens up. This is a nice strategy as the game progresses, because you can always revisit previous sections of the Road to Rule if you decide you want to buy one of the upgrades you previously skipped. The only unfortunate component with this mechanic is that it can leave you with only two or three expressions to use, and you often have to decide between skill upgrades and social upgrade

As mentioned before, combat is simple enough and consists of the same controls as before. The A button lets you sprint, duck/roll, open doors and treasure chests and jump off/over anything that allows it. That’s not to say there’s no depth to the combat though, as players can combine magic to create new effects, hold down the B button to charge-up magic attacks or even flip quickly between attack types to spice up their style. Again, the spicing-up isn’t necessarily an upgrade thing anymore, but the AI in Fable 3 is smart enough to adapt to repetitive attacks, and certain enemies are impervious to certain attack

Another thing that keeps the combat fresh is the ability to upgrade certain legendary weapons with new abilities/powers based on whether you meet certain criteria while using it. For instance, killing a set number of enemies at night will give you a 40-point modifier to nighttime combat with that weapon, killing a certain number of specific enemies or doing a certain number of flourish kills with that weapon will unlock additional modifier These weapon upgrades are sort of a game within the game, and they’re certainly worth taking advantage of.

The co-op components are improved from Fable 2, with players actually able to enter another player’s world to do battle, become business partners, exchange gifts, get married and even have kid  Co-op play also provides a window into other player’s worlds and their choice Did they keep their promises as revolutionaries or surrender to the pressure of being a leader? Is the orphanage rebuilt in their Bowerstone? If your partner finished the game, do they have angel wings? Those choices make up the heart of Fable 3 and the opportunity to see the effects in another player’s world are truly exciting, especially for those of you who are uninterested in a second play through.

Fable 3 feels like Lionhead finally delivered on the gameplay aspirations and creativity they first envisioned. Fable 3 doesn’t strive to introduce new mechanics but is instead pre-occupied with fixing and streamlining existing one If Fable 2’s unwieldy menus kept you from much of the amazing content that game had to offer, you’re going to like what Lionhead’s built for you now.