As I stumble my way up the stairs, I find a strange room filled with large, red train carts. I see a door on a high platform. The only way I can access it is through these train carts, and I have to place them together so I can safely make it across. Sounds easy enough right? Especially considering how close these carts are to each other already, and all I have to do is push them together. After roughly an hour I finally reach the room. As it turns out, controlling a blobby white creature named Bob who can barely walk straight makes even the most mundane task challenging.

Human: Fall Flat is a physics-based platformer that has you continually solve a slew of environmental puzzles. The game can be best compared to Gang Beast, where you also control blobby creatures, only in that case you’re fighting other players online. Fall Flat attempts to be a full-length, engaging puzzler while employing purposefully frustrating mechanics, and this actually works for the most part. 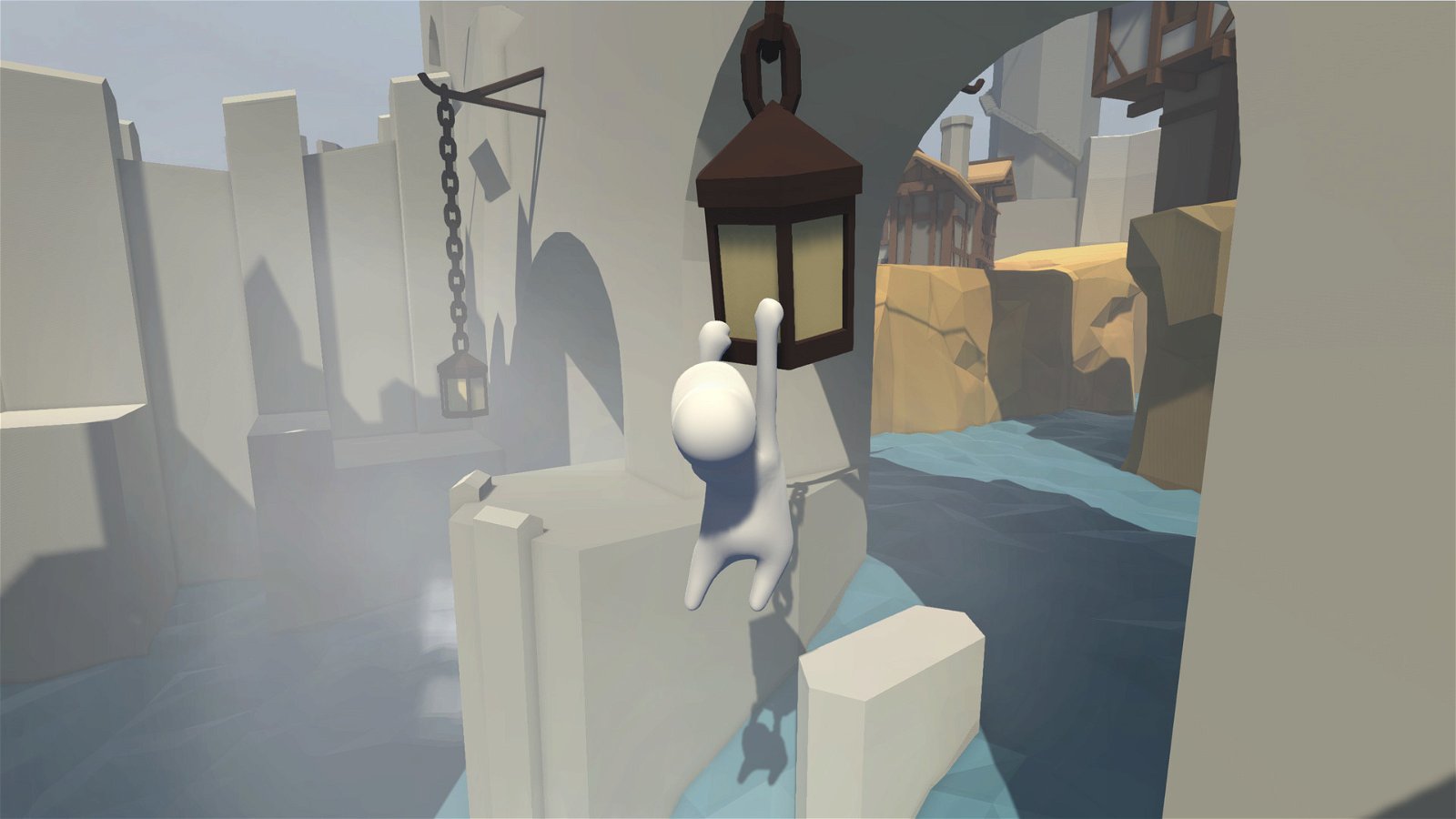 You see, Bob’s independently controlled arms can’t be used to scale vertical surfaces, but instead simply haul him over ledges. Controls are deliberately tricky, and your right and left hands are controlled separately by the right and left mouse buttons. This makes you mess up quite a few simple activities, like pushing a cart or a garbage can, or grabbing up to a ledge and pulling yourself up. In order to climb a ledge, for example, you have to raise both your arms, push the mouse forward and hold both buttons to jump toward it. Once you’ve grasped the ledge, you then have to pull down the mouse in order to do same with your arms. It’s a complex affair for something that should take a few seconds for the average person.

As result, a lot of the puzzles in Fall Flat expertly make full use of these clunky controls, creating puzzles that are enjoyable to solve. Pushing the red carts to make a giant platform is a prime example, as it never got boring to figure out and ultimately execute. But like all similar games — Octodad: Dadliest Catch is one example — things can get frustrating. The controls often don’t work the way you want them to or the way the game intended them to work. Picking up a plank and laying it across a gap requires an excessive amount of precision that makes playing the game a bit unbearable at times. But thankfully these moments of frustration are few and far between in an otherwise excellent experience.

Fall Flat’s physical comedy makes the game even more enjoyable. Bob’s animations are driven by inverse kinematics, which means they react to the world around you. If Bob falls off a cliff, his limbs will contort in weird and unnatural ways. It looks satisfyingly ridiculous. Fall Flat’s untextured art design is beautiful to look at. Every single little object and environment is only colored and shaded, giving Fall Flat’s world an unfinished coloring book appearance. You can customize Bob by painting a few weird things on him. I gave the guy a mustache.

Fall Flat also has a co-op mode, but it doesn’t change gameplay in any way other than letting you enjoy its comedy with another person.

Fall Flat’s weird controls can frustrate at times, but it still manages to be enjoyable and hilarious throughout.
REVIEW SCORE
7.5
File Under: Platformer