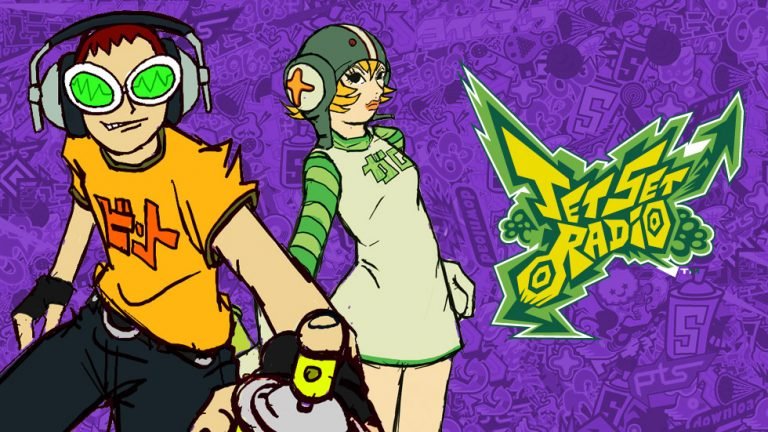 Sega shows that you can up-rez soul

For those like me who still mourn the untimely demise of the underdog Dreamcast, it’s a daunting prospect to play a HD version of Jet Set Radio that’s been dragged out from our warm fuzzy memories and into the cold light of modern day gaming. But fret not – after extensively putting the game through its paces, I’m pleased to say that it holds up well enough that I feel no need to chastise my previous self for dumping so many hours into it.

The premise of Jet Set Radio is about as absurd as game plots can be: a rag-tag group of inline-skaters get in a turf-war over graffiti spots, the police intervene, and the plot spirals into a mess of kidnappings, conspiracy theories, and demonic golden Rhinoceroses. Whatever about the nonsense in the cutscenes, the gameplay consists of collecting spray cans while navigating around a fictional Tokyo, evading pursuers who intend on stopping you from tagging predetermined spots as your time limit ticks down.\

The game mechanics haven’t been touched one jot. The timer is still maddeningly unnecessary, with seemingly arbitrarily limits that cause difficulty spikes every few stages. The amount of aggressors in the area increases as more graffiti is sprayed, so clever prioritization of targets becomes more important than any skill on the player’s part. Getting around the world is marginally interesting thanks to a rudimentary trick system – wall rides and jumping somersaults tie grinds together into a chain, but there’s no skill being tested beyond building up momentum and being able to follow the predetermined trick runs in the levels.

The graphics in Jet Set Radio were absolutely stunning when the game debuted 12 years ago, and the power of the current generation systems only serves to enhance the presentation. The colours pop, the cartoony outlines on the characters are more striking, and the framerate is buttery-smooth. No attempt seems to have been made to prevent the old textures from looking like a bleary mess, but once the game is in motion, there’s little time to pore over the background detail as the world whizzes by.

Despite being a game with an evergreen visual style, there’s no visual consistency to the gameplay elements – some rails can’t be used for grinds, and not all horizontal surfaces will accept your wall rides; the only way to know is trial, error, and memorization. Unlocking new characters involves levels copying their trick runs, which involves watching for two minutes, then trying to repeat from memory: an absurd thing to ask of gamers in late 2012.

The restoration has made one vital addition to the control system that’s much appreciated; right-analog camera control. Being able to effortlessly pan the camera to line up runs, locate tags, and hunt for spray cans ameliorates a considerable amount of vexation imposed by the ‘snap to centre’ camera mechanic of the Dreamcast original.

You can dissect it as much as you possibly can, but there’s no game with the kind of soul that Jet Set Radio has. The technicolour style, pacifist gameplay, and unapologetically goofy characters were a stark change from the norm in 2000, and it’s even more refreshing today. Even in the context of current generation gaming, Jet Set Radio’s fun vibe is still able to get its hooks into me. The characters will dance on the spot during dialogue scenes, the game allows you to create your own graffiti that successfully makes you feel connected to the world, and the playful remixes of the game’s music towards the endgame are thoroughly charming.

Jet Set Radio is not a game for those who get frustrated easily with trial and error, but for those who persevere, there is a lot of fun to be had in this unique genre-mash up. If you’ve ever felt a compulsion to dig out your Dreamcast and see if your Jet Set Radio GD-ROM is still in working order, do yourself a favour and buy this instead. $10 for the definitive (although largely untouched) version of a classic is a nostalgic indulgence I can recommend to anyone who gets pangs in their heart whenever they see a swirly logo.

Jet Set Radio is not a game for those who get frustrated easily with trial and error, but for those who persevere, there is a lot of fun to be had in this unique genre-mash up.
REVIEW SCORE
7
File Under: Indie Game, Xbox