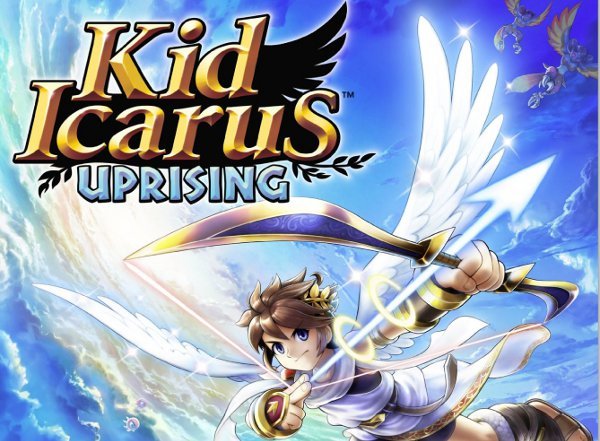 In general, Nintendo treats their franchise stars well. You never have to wait long to bounce Mario around on a fresh set of goombas, send Link off on his latest magical quest, or blast your way through space as Samus. However, one little guy in their back catalogue hasn’t gotten a hell of a lot of attention from the big N. It’s been decades since Pit went on his Gameboy and NES adventures and now suddenly he’s back as a major player on the 3DS. The little guy made an appearance in Smash Brothers Brawl back in 2008 and it must have gotten the folks at Project Sora all excited because they clearly put a hell of a lot of time and effort into Kid Icarus Uprising. This is yet another game that pushes the 3DS to its limits with technical accomplishments that can only be described with the word “wowsa” and addictive gameplay that will have you hypnotized for days. It’s an amazing gameplay experience and that’s a good thing too because there are some pretty major flaws as well that prevent Kid Icarus Uprising from being the finest game on the system. It’s still easily one of the best 3DS games around, but well…you’ll see.

The story sets the nymph-ish Pit on a mission to take out Medusa and all her evil buddies with the Goddess Palutena as his guide. This isn’t the simple sidescoller of the old days though, it’s an epic flying action/shooter that at times feels like a Disnified (or Nintendofied) version of God Of War in terms of scale and setting. Pit doesn’t have wings of his own, so Palutena will control his flight path while the Kid handles all the shooting an ass-whoopin. That’s a bizarre storytelling device used to explain away the fact that the game is predominantly an on rails flight shooter, kind of like Star Fox. It works well enough and Palutena explains everything you’ll need to know about the gameplay and more. In fact, she explains a little too much. You see, throughout each level (and I mean during practically every second) Palutena, Pit, and the current villain chatter on incessantly. Sometimes it can be fun with the characters making self-conscious videogame jokes (ex: “Do I look like a strategy guide”) or introducing a villain with an 8-bit screengrab from the original game, but the talking never ceases. Often they’ll even talk about how much talking their doing. It’s a constant distraction that encourages you to look away from the gameplay screen at the chatterboxes on the touchscreen and that will quickly racks up a few cheap deaths if you aren’t careful. Fortunately, the gameplay itself is so frenetic and action packed that it’s easy to ignore the dialogue and simply consider it one of the many sound effects and music tracks going on at all times.

Each level in the single player mode of Kid Icarus Uprising can be broken down into three distinct components. There’s a flying section, a ground combat section, and a boss battle. That’s it. Repeat, repeat, repeat. The flying sections are reminiscent of Sin And Punishment 2 on the Wii. Your forward momentum is controlled by the computer, while your movement on the screen in controlled with the circle pad and aiming is done with the stylus on the touch screen. That’s right, the stylus. To play this game you have to balance the controller with one hand and use a plastic pen to aim with your other hand. It’s just as cumbersome and awkward as it sounds and while Nintendo included a stand to reduce hand-strain, that really only works if you have a counter on eye-level. Despite the discomfort, the stylus is quite accurate and the flying sections play like a dream. The ground sections are another story because there you have 360 degree character control with the circle pad while the stylus covers aim and camera controls. This is a bit of a design disaster that you just have to get used to. It’s never perfect, but play long enough and you’ll work out a system. A second circle pad would have made things a little easier, so I brought out my buddy the circle pad pro. Unfortunately while you can use either circle pad for movement, aiming can only be done with the stylus and that’s even more uncomfortable to do with that extra clunky piece of plastic slapped on the system.

There’s no getting around it, while the stylus controls work well from a technical
standpoint, they are literally a pain to use and endlessly frustrating in the ground levels. Here’s the thing though, Kid Icarus Uprising is such a joy to play that it’s worth the discomfort. The main quest will probably take you about ten hours and it never ceases to be thrilling. Levels only clock in at about ten or fifteen minutes a pop for portable play and you will replay them endlessly. Difficulty can be cranked up to an absurd degree and there are more unlockable weapons and weapon combinations available than I would even dare to attempt to list here. Replay value is immense as each level is quite different visually even if the formula never changes, flying between ancient ruins, baron deserts, parted seas, hallucinatory chambers and more. I’m not allowed to say how many levels are in the game, but there are more than you’d think (wink) and each is a triumph of design. Project Sora doesn’t quite push the graphics to the level Capcom achieved with Resident Evil Revelations, but that’s probably only because there’s so much happening on screen at the same time. The 3D is perfectly suited for high-speed flight with characters and debris constantly flying towards the camera to eye-popping effect. This is easily the best looking game that Nintendo has put out on their new system to date and hopefully it’s a standard the company will uphold.

Even if you somehow manage to get bored with the main game and all of the varying difficulties and unlockables therein, Project Sora has crammed in even more gameplay options. First off there’s an online battle mode that runs like a dream with some amazing level designs. You can play in team matches or free-for-alls and at least during pre-launch play I didn’t notice any lag issues. Unfortunately, the ground combat control scheme is used, which is particularly rough when trying to take on equally weighted human opponents rather than the regular bullet fodder of campaign villains. Still, only Mario Kart 7 and Street Fighter IV offer a better 3DS online experience and I’m sure the matches will only get more intense once the game is released and players ‘round the world adjust to the strange control scheme. On top of that amazing add-on, Kid Icarus Uprising  is only the first major release to feature AR functionality. Now it ultimately comes down to player cards with characters that pop out like the AR cards included with the system; however, if you line them up side-by-side they’ll battle in real space. It’s ultimately little more than extra gimmick that looks cool, but I’ve been disappointed by the lack of AR support on the 3DS so far given it’s incredible potential, so it’s a nice little addition. Oh and there’s also a Street Pass gem trading system thrown in because why the hell not?

In terms of total content, this is probably the deepest game released on the 3DS by far, offering an amazing single player experience with a massive list of unlockables and endless replay value as well as a stellar online mode and some AR/Street Pass extras thrown in for good measure. The little game takes full advantage of absolutely everything the 3DS can do and would easily qualify as the system’s best game were it not for a couple of issues. The constant gameplay chatter is insanely annoying and the controls are wonky and physically uncomfortable. If proper circle pad pro support were offered, I’d probably give this game a 9 with a “but.” However, I just can’t do that with the game as it stands. It’s almost as if the game was initially designed for the Wiimote/nunchuck set up before being awkwardly transferred over to the 3DS at the last minute. Still, despite those undeniable problems, Kid Icarus Uprising is one hell of a good time and easily one of the top titles available for a 3DS. It’s still a few tweaks away from masterpiece status, but hey that’s what sequels are for. If you own a 3DS, run to the store shoving the elderly and children out of your way to get a copy. This game is worth the hand cramps.

Each level in the single player mode of Kid Icarus Uprising can be broken down into three distinct components.
REVIEW SCORE
8
File Under: