Handhelds are the last bastion for great JRPGs. At least, that’s where I’ve had most of my great experiences. Yes, every now and then one will float around on consoles that manages to capture everyone’s imagination, but odds are, if you love the genre you likely own a 3DS or Vita. Honestly, the biggest reason for this presence on handhelds is that most JRPGs are relegated to that niche because it’s cheaper to make a handheld game and the gameplay style generally lends itself to on-the-go gaming. With a large chunk of games in the genre developed with this method in mind, there are some games in the genre that get lost in the shuffle, and that’s my biggest fear for The Legend of Heroes: Trails of Cold Steel II for the Vita. Still, it’s a strong JRPG that is also available on the PS3, and part of a longstanding series developed by one of the master class JRPG studios in Falcom. So if you missed out on the game before, The Legend of Heroes: Trails of Cold Steel II is worth a spot in your library.

If you didn’t play Trails of Cold Steel II’s predecessor the plot might be a little confusing, as it focuses on characters already introduced in the last entry. As well, the story takes place almost immediately after the events from the previous title. You take control of Rean Schwarzer, a student at a Military Academy during a time of war. He awakens beside his mech suit, which apparently lost all its power protecting him. The only other character with him is a talking cat named Celene who functions as a link between the two games and helps fill in the story gaps to new players. Rean embarks on a mission to reunite with his classmates who were separated during the last game in the hopes of saving his home and his country from a destructive war.

That’s the general overview for the plot, but there’s a lot more going on than just that. Rean struggles with the burden of being a soldier, an absent son and a less than ideal brother. He feels responsible for a lot of the horrors brought on the town. While everyone is so proud of him, and they go out of their way to help him, he feels like he hasn’t done enough. The first hour of the game includes him wandering the town talking to everyone and telling them that he’s fine and doesn’t need help when he’s clearly not 100 per cent healed from his incident..

The most interesting aspect of Trails of Cold Steel II is definitely the relationships between the characters, despite some of them being straight up weird. For example, Rean is very close with his sister. Technically, they’re only related by adoption, but she’s still his sister. During his first day back, he goes to a hot spring to relax and she decides to join him and “wash his back”.  Honestly, it was kind of weird, and the fact that they pointed out it was creepy in the dialogue as well made it even more uncomfortable. Interactions like this so early in the game set an awkward tone right off the bat, but aside from some cringe worthy moments like that, the relationships between Rean and the other characters are more endearing and heartfelt than anything. 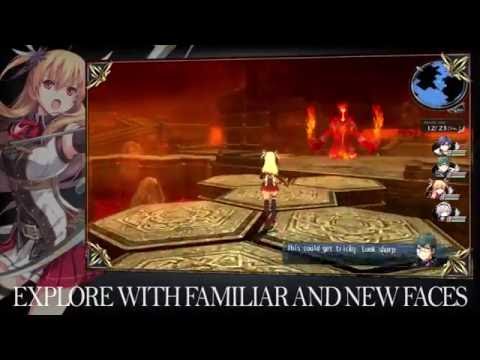 Character building and world building are two big aspects of the game from a story standpoint, but at times it does come at a cost. There are some cutscenes that run way too long and are shown in dialogue boxes, which make it even more difficult to feel invested. You can tell that this wasn’t made for handhelds first and foremost, and it does make it hard to care about their talking points at times. Early on in the game, the characters sit around a table talking for what felt like 20 minutes (that was with me speed reading). It completely disconnected me from the rest of the game, even if it was needed.

Despite these issues the plot is engaging, but it takes a back seat to the combat, which mixes strategy with a classic turn-based style to make something refreshing, yet familiar at the same time. Battles take place in a circle that characters cannot leave. Players have the option to move characters around the map before actually engaging in combat for a few reasons. The first is to get out of tight situations; the other is to gain a tactical advantage. You have arts (magic), crafts (special attacks) and physical attacks to choose from, and they differ in terms of attack type (slash, pierce, thrust and strike), which is similar to any other JRPG. This series adds a different dynamic by including a linking system. Players can link two characters (either before or during battle, so you’re not stuck) to allow for more powerful attacks when the time is right. If you use the right kind of hit on an enemy, they will become unbalanced and leave them open for your linked partner to initiate a stronger attack. If you manage to hit your desired double team attack at the right time you can dole out a second, more powerful attack. Using links along with a variety of other moves can lead to the chance of using the more powerful “S-Break” to land a devastating blow.

Since this game was intended for home console release, The Legend of Heroes: Trails of Cold Steel II is big in terms of presentation. The world is huge and ready to explore with a lot to offer in terms of non-story activities. Fishing, for example, is a great way to unwind between battles, but even exploration can feel relaxing. Visually, the game does look like it’s slightly downgraded from the PS3 era to work on the Vita, but the overall atmosphere of the game is impressive. The music manages to jump between epic and relaxing depending on the scene, and while it does loop quite a bit, the content never gets annoying. Mix that with the game’s intimate moments between main characters and there’s a really complete game worthy of your attention.

Despite being a PS3 re-release for handheld, I was very surprised with The Legend of Heroes: Trails of Cold Steel II. While it does feel a little too “home consoley” at times, it is a tight JRPG with characters you want to care about and root for. Sometimes those characters overstep their bounds and act a little too intimate with each other for comfort, but they’re likeable enough to forgive. While it is hard to jump into a direct sequel like this, I do recommend giving the game a try if you have a Vita. Even with all the other JRPGs at your disposal on the handheld market, this will grip you in a way few games can.

Final Thoughts
While Trails of Cold Steel II doesn’t always lend itself to on the go gaming, it deserves a spot in your Vita library regardless.
File Under: PlayStation, RPG, XSEED
×