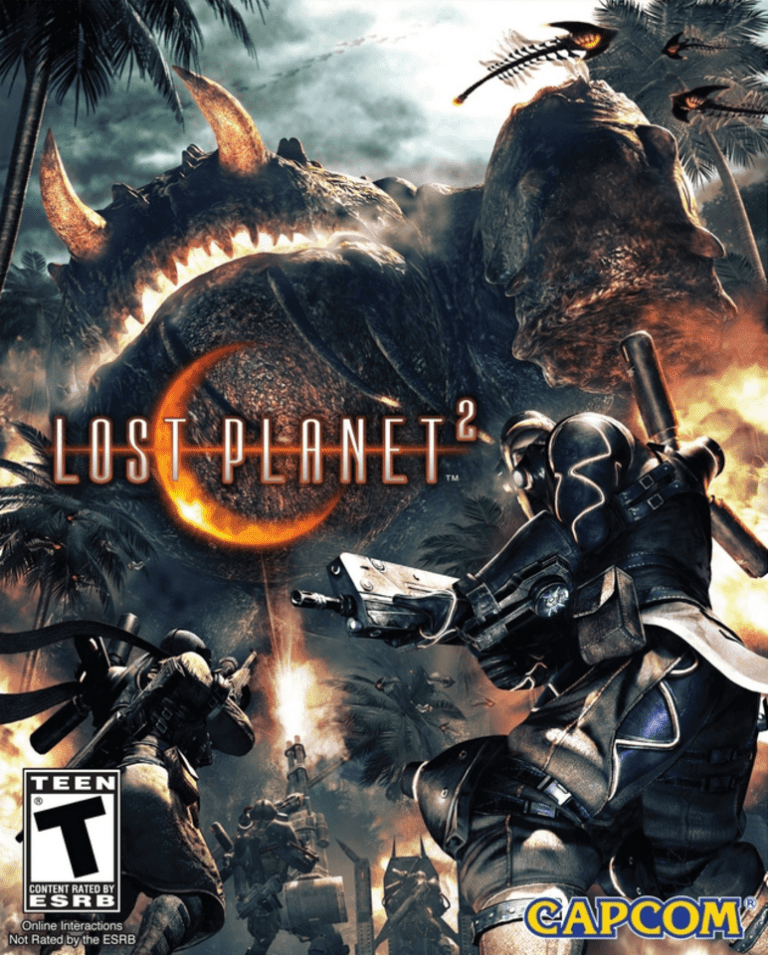 Lost Planet 2 should be a good game. The third person combat isn’t great, but it’s generally functional and engaging. The boss battles are toweringly epic and there’s a fantastic arsenal of toys to fight with. Unfortunately, the game constantly rides the ups and downs of a schizophrenic gameplay seesaw. Every cool feature has been balanced with a moronic design decision, meaning that Lost Planet 2 adds up to significantly less than the sum of its part

The celestial body of the game’s title is E.D.N. III, a war-torn planet powered by thermal energy and infested with enormous bugs known as the akrid. The story meanders through six different factions in an ambitious saga about brotherhood and teamwork. I think. I have no idea what was actually going on and the writers didn’t seem particularly interested in aiding my understanding. It’s impossible to differentiate one anonymous soldier from another and things like motivation or the protagonists’ identities are never clearly resolved. Efforts to generate sympathy for the faceless characters are more comical than cathartic.

Lost Planet 2 ultimately plays like a series of multiplayer maps tacked onto the thin facade of a story, not that there’s anything wrong with that. All of the gameplay features trend in a cooperative direction in an attempt to capture the constant Action of an online death match within a solo adventure. You have a limited number of lives, but death ships you back to respawn points instead of the start of the level. Combat is all about option The stages are littered with a variety of weapons and mechs that allow you to approach any given encounter with your preferred military style.

Sadly, the implementation does not live up to the ideal, as atrocious AI completely breaks the game from a single player perspective. During a fight against a giant sand worm, I had to manually load, charge, rotate, and fire a massive railway gun, all while maintaining a cooling mechanism to prevent everything from exploding. It would have been easy with even one other human teammate, but it was nearly impossible on my own. My allies futilely popped pistols and peashooters at the armored monstrosity, and always seemed to be pursuing counterintuitive courses of Action.

I can respect the fact that Lost Planet 2 is designed to be a cooperative undertaking, but that’s no excuse for the poorly constructed solo feature Decent enemy NPCs add further injury to insult. The mech that camped around my respawn point was reminiscent of a multiplayer opponent, but it’s unbalanced when there are no other players to keep such behavior in check. If Capcom never intended to program competent bots, they would have been better off exorcising the single player mode from the start.

Bad AI aside, the game’s most inexplicable design blunders are just as unforgivable in a multiplayer context. The worst anti-feature is the shortage of automatic checkpoint Lost Planet 2 only saves at the end of every chapter, forcing you to replay the two previous sub-missions should you die during the third. Since each chapter can include over an hour of gameplay, late setbacks often make the game feel like a punishment inflicted on the modern gamer. Unexpected (and unnecessary) quick time events at the very end of missions only exacerbate the problem.

Generally speaking, Lost Planet 2 has an antagonistic disdain for established gaming convenience There’s no pause menu, so you can’t interrupt the Action should you have to answer the phone or go to the restroom. The game didn’t even stop when my controller died, leaving me helpless and bloodied until I could find a fresh set of batteries

“For all of its problems, Lost Planet 2 can still be fun.”

The core gameplay is similarly dysfunctional. Larger enemies will absorb literally thousands of bullets before going down and rocket launchers aren’t much more useful. Boss battles take forever because there are no weapons capable of dealing enough damage to expedite the proces Your character’s slow movement speed quickly saps any appreciation for the impressive sense of scale.

The issues are inverted once the weapons are turned against you. Lost Planet 2 is packed with heavy artillery that will wipe out your party with devastating one-hit kill The frequent respawn points ensure that the game never becomes too challenging, but the developers abuse the feature. It’s impossible to evade most of the deadlier attacks, while successions of unavoidable deaths simply feel unfair. In fact, ‘unfair’ is an accurate descriptor for the entire game. The unresponsive and inaccurate controls ensure that even the most skilled players will have trouble getting through unscathed, and the unfriendly interface makes it seem as if the odds are artificially stacked against you.

For all of its problems, Lost Planet 2 can still be fun. The levels are well designed and many of the cooperative scenarios are very satisfying to play through. Stages that pit you against more vulnerable human opponents lead to long stretches of balanced gameplay and exciting third-person shootout Multiplayer also delivers some excellent replay value. Unfortunately, the game soils itself so often that you seldom have enough time to appreciate the things it does well. Lost Planet 2 gets a 3.5 for multiplayer, a 2 for single player, and a 2.5 as a packaged product. It’s more fun to complain about than it is to play, and that should be reason enough to deter all but the most loyal fan

It’s more fun to complain about than it is to play, and that should be reason enough to deter all but the most loyal fans.
REVIEW SCORE
5
Buy On Amazon
File Under: Fantasy, Science fiction, Shooter, Xbox