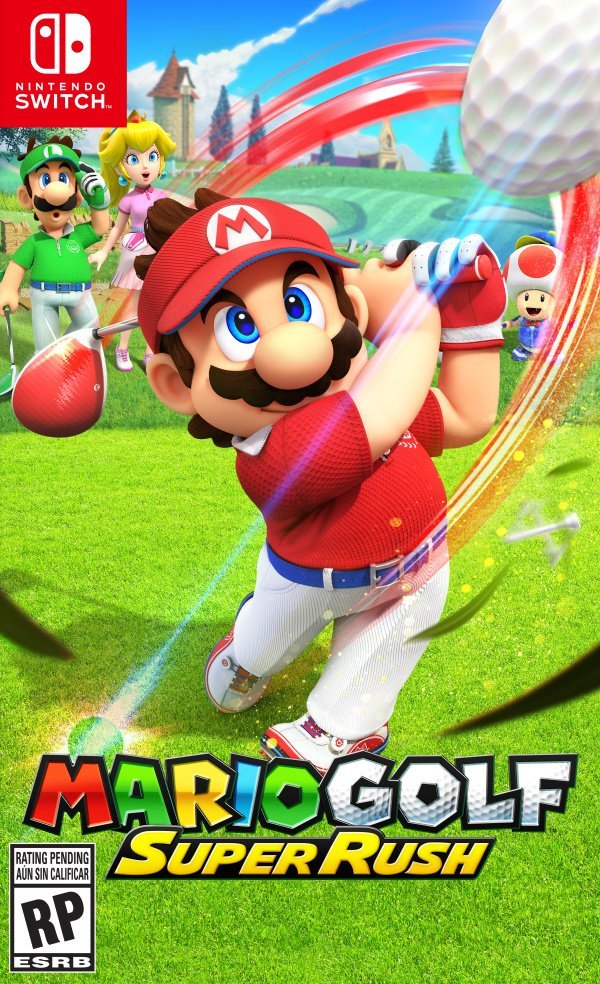 In the past, I’ve mentioned that I never really got into sports games that didn’t have “Mario,” in the title, but there’s a lot more depth to that statement than you might think. It was back in 2000, when I first played Mario Tennis on the N64 that I became obsessed with tennis, eventually convincing my parents to let me take lessons.

While I’ve always enjoyed golf games—finding them particularly interesting, spending the odd afternoon with Great Golf on my cousin’s Sega Master System—probably the only reason I enjoy it as much as I do now is because of how much I got into Mario Golf on the N64, even going so far as to pick up the game IRL a few years ago.

So you can imagine my excitement when Nintendo announced Mario Golf: Super Rush for the Nintendo Switch. I had long been awaiting a new Mario Golf—especially after Mario Golf: World Tour on the 3DS being particularly excellent. However, after spending countless hours hitting the links in this newest outing, I find myself feeling less enamoured by what was added, and left more frustrated by what they removed.

For the most part, Mario Golf: Super Rush is a pretty fun game. Players will know exactly what to expect here—jump in, choose a player, select a course, and start golfing. While players will have 16 characters to choose from (17 if you count the Story mode Mii character), only two courses are available at the start; although more can be unlocked by completing 18 holes in free-play, or progressing through the story.

Gameplay has been changed a bit this time around though. Instead of the standard “two-button golf” players might expect—press A to set your power, A again to set your accuracy—Mario Golf: Super Rush has simplified the process, now only requiring a single button at your desired power (although players can press A or B again quickly to set Topspin or Backspin). Hooking or Slicing your bar is now somewhat left up to chance, as shooting from bad terrain will increase the power bar’s “risk zone,” which can increase the chance of a bad shot.

Although, one unique thing they did with the power bar that I do like has to do with spinning the ball. If a character has a high enough Spin stat, it can split the power bar into multiple sections, allowing the player to add different directions of spin as the ball travels; which is actually a really useful technique for navigating around certain obstacles.

Each course is uniquely designed and offers a decent challenge—from the scenic landscapes of Bonny Greens, to the sandswept hills of Balmy Dunes. Each course is bursting with colour and life, and looks beautiful rendered in HD, and there is a lot of Super Mario charm in each one, both in environmental details and even Mario enemies acting as course hazards. Furthermore, there’s a connectedness to each hole that makes you feel like you’re on a real golf-course—unlike previous games where each hole felt like individual levels.

Although, if you’re not interested in standard Stroke Play, there’s the new interpretation of “Fast Golf.” Unlike in previous Mario Golf games where “Fast,” or “Speed,” Golf would have players playing regularly, while shooting for their best times; Mario Golf: Super Rush reinvents this mode into a much more frantic, almost party-like mode where players all shoot at the same time, and then run to their balls for their next hit. Players can try to slow each other down with Power Moves, or Power Shots that can knock opponents balls around.

But it’s not simply chaos—players still need to play effectively as each stroke adds 30 seconds to your overall time, so players will still need to aim for Birdies or Pars, while trying to get to their ball as safely as possible. In addition to the Fast Golf mode, there is the Battle Golf mode, which plays similarly, but with a twist. Instead of playing individual holes, players all play on one giant course; the first to sink three balls wins.

Then of course, there’s the Golf Adventure. Similar to that of Mario Golf on the Game Boy Color, Mario Golf: Super Rush allows players to use a chosen Mii to compete in an RPG-style…well, golf adventure! Starting off as a rookie, players will compete in tournaments of varying play-styles in order to make it to the pros—leveling up their character and building them according to their play style.

There’s a lot of charm in the Golf Adventure, with many NPCs having a lot of humorous dialogue and personality. Furthermore, I would recommend Golf Adventure as it acts as the game’s playable tutorial—there is a sort of digital manual book in the “Golf Guide” section, but for players like me who learn better through playing, it’s a lot more helpful.

And now we come to the dreaded, “however.” Mario Golf: Super Rush has made a lot of changes, and worst of all, in my opinion, is the camera—actually, the whole UI is a bit of a mess. Simply put, the camera controls in this game are a mess and make the game incredibly frustrating to play.

In previous Mario Golf games—Mario Golf World Tour most immediately—where you were shown the full trajectory of your shot, with a terrain grid at the end to give you an idea of how your shot would land; and you could move the camera with pretty lenient freedom in order to scope out your shot, Mario Golf: Super Rush only allows you an overhead view of your shot path. Furthermore, if you try to zoom in to get a better idea of how your shot will travel, it will only zoom in to the projected end-point of your shot. This is the same for putting—you can’t pan the camera around the green, just an overhead camera that only zooms on the hole, made worse by a UI that actively gets in the way of the overhead view.

Even more baffling is how the terrain grid appears where the player is standing, which is pointless since you can clearly see the slope of the land you’re standing on, and the power-bar curves if you’re standing on a slope. In fairness, the game tries to offset this with the “Range Finder,” but even this is fairly useless since, while it will show you an expanded terrain grid of the scanned area, players are unable to line up their shots while in this view. Furthermore, if there’s a hill or any obstacle in the way of where you want to scan, then you’re basically stuck.

“…a lot of Mario Golf: Super Rush feels flat, or undercooked compared to its predecessors.”

This might not sound like a big deal, but it really is. Golf is a very technical game, with every shot needing to be set up in a precise way in order to get the best shot. With such an abysmal camera and UI, Mario Golf: Super Rush forces players to do a lot of guesswork in setting up their shots. Furthermore, it is actually at odds with Fast Golf, since the mode wants you to play fast, but kind of forces you to meticulously set up your shot, since there’s so little information being provided on how it’s going to land.

In fact, a lot of Mario Golf: Super Rush feels flat, or undercooked compared to its predecessors. Outside of the three game modes, there’s no real variety in challenges—no Ring or Coin Challenges, simply Score Attack or Time Attack. Even though each character has different stats, they all feel pretty much identical, sand gone are the unique animations for Birdies, Pars, and Bogeys—which is kind of baffling, since Mario Golf: World Tour kind of popularized the Waluigi Rose that Nintendo loves memeing now.

What’s more, the game can be a bit of a technical crapshoot as well. While gamers might initially be impressed when they boot up the game and it launches with some PS5 load-times, and it plays pretty solid both on and off the dock for the most part, there were a few moments of some pretty noticeable framerate drop in some of the more dynamic courses. Also the motion controls are an absolute joke—there’s no indication of how much you need to wind up to get certain powers, putting is a complete nightmare, it’s easily the least fun way to play the game. Did no one play Wii Sports before designing this?

None of that is to say I’ve been hating my time with Mario Golf: Super Rush. There’s definitely an enjoyable golf game here that is more approachable, and less serious than something like PGA Tour 2K21. I think it would definitely have been made much better by a camera and UI that reflected that of its predecessors, and maybe had a little more to offer. Even if you’re a stickler for things like this, such as myself; if you can look past these flaws, I think you’ll enjoy Mario Golf: Super Rush.