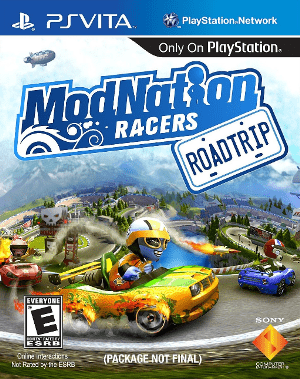 The Nation In Your Pocket

Sony may not be particularly imaginative with its launch line up of games, but it is making safe, successful choices. ModNation Racers: Roadtrip is another title added to the list of console franchises subjected to the “Vitafication” process, shrinking down to Sony’s newest portable wonder. The migration actually does a lot of things right and at an impressive level of quality, but there are a few feature issues that keep this from being a safe, easy “must buy” title for the Vita.

ModNation Racers: Roadtrip is portable version of the game best known for being a mash up between Mario Kart and LittleBigPlanet. Players can create a “mini-fig” that acts as their driver, create a kart, and even create the tracks that the kart racing occurs on. Most surprisingly of all, the ability to upload those tracks and download tracks from the existing online collection of the console cousin has made it into this game, so players can never complain about a lack of content, as long as they have online access.

Like other Vitified games before it, ModNation Racers: Roadtrip has some impressive visuals for handheld software. The graphics are comparable—if not outright equal—to its console counterpart. The game starts showing its portable limitations in the performance department, unfortunately. While it looks just like the original, more hectic races with a lot of attacking can put a visible strain on the game, with hits to the frame rate. That kind of performance dip is always problematic in any kind of racing game where timing is everything. Roadtrip also fails to really take advantage of all the potential it has. The implementation of touch features was expected, but the performance of the touch screen is unpredictable, again, due to technical issues. For basic navigation and some aspects of creation, the poking and pinching functions are as smooth and responsive as you’d expect from a tablet or smartphone. But suddenly that responsiveness can take a nose dive as background loading or processing occurs. It’s an unfortunate technical gaffe, because when the touch features work, they actually work very well, there’s just an unreliability to how long they’ll keep working so smoothly before things start to lag for no apparent reason.

Perhaps because  Sony San Diego decided this was a portable game, the campaign, or career mode is also a much more truncated version of its console counterpart. In addition to the notable absence of the commentators for this outing, the career mode consists of picking various events and competing in them, rather than any sense of narrative progression. The original had a silly storyline surrounding the player’s rise to greatness. Roadtrip forgoes the humor and personality it forged on the console to go for a collection of events similar to the more serious Wipeout series, and it’s a definite loss for the franchise. However, the biggest single loss to the game’s functionality is the removal of online play. The console version had it, Roadtrip’s peer, Wipeout 2048 also has it, but for some reason they decided not to implement it here. Ad hoc competition is still possible, but that means trying to find three other Vita owners with the game and all getting together in the same room to play. It’s a puzzling omission since players can still create and upload their own tracks to the Playstation Network as well as download existing tracks.

These criticisms aside, ModNation Racers: Roadtrip is a fundamentally solid game. The racing nature of the title gives it that perfect bite-sized gameplay mindset that works so well on portables. If you enjoyed the console original and don’t mind a little hit to performance and a lack of online play, you definitely want to pick this up.

ModNation Racers: Roadtrip is portable version of the game best known for being a mash up between Mario Kart and LittleBigPlanet.
REVIEW SCORE
7
File Under: