Taking the Series to Newfound Heights 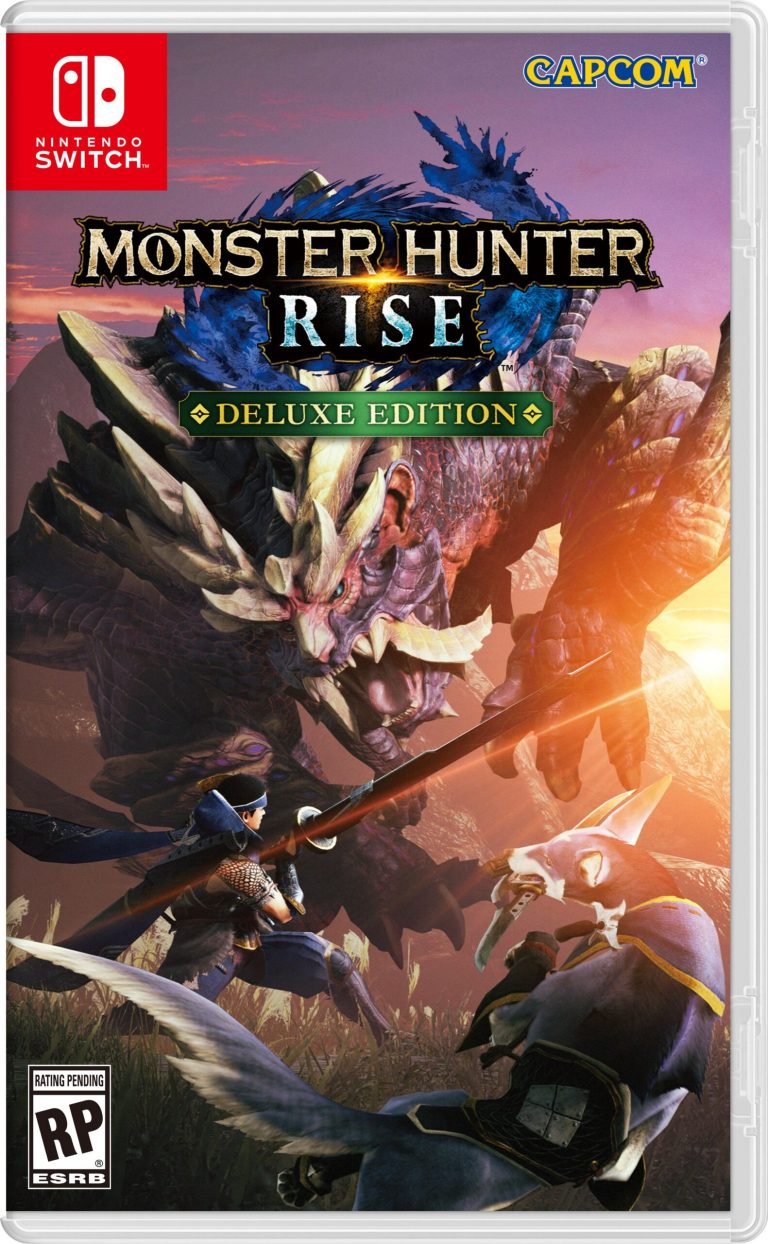 Coming off the massive global success of Monster Hunter: World on the last generation of consoles, Capcom has decided to return back to their portable roots with their latest entry in the fifth-generation games, Monster Hunter Rise. Built from the ground up to utilize every bit of power the Nintendo Switch has to muster, Rise manages to strike the perfect balance of keeping the quality of life mechanics and insanely in-depth arsenal of weapons World prided itself on, while catering to series veterans with gameplay systems reminiscent of the previous generation titles. Yet, even with this remixed core Rise is built upon, Capcom still finds new ways to innovate this nearly 18-year-old franchise further with the introduction of their latest gameplay enhancing gimmick, the wirebug.

Players experience their journey in Monster Hunter Rise employed as a hunter in the seemingly serene village of Kamura. Renown for its smithing and gorgeous aesthetic, Kamura serves as a great compact hubworld for hunters to reside outside of hunts and is home to a wide cast of charming characters. However, the village is also the victim to a recurring cataclysmic event, known as the Rampage, where hordes of monsters assemble with the sole goal of breaking down the gates to the village and wiping it out completely. It’s your goal as the resident expert hunter to investigate the cause of the Rampage and put a stop to it once and for all. Sadly, that’s about all the depth I can say the story in Rise truly offers over the course of the main quest line. The Monster Hunter franchise is no stranger to barebones stories like this one, but after the attempt made in World to add a more cinematic feel and a better sense of progression to its tale, I was hoping Rise’s development team would try to follow up with something even better in this shinobi and samurai themed spinoff.

My slight disappointments with the story aside, the real meat of any Monster Hunter title are the intense fights with a wide roster of epic creatures, and the addictive learning curve that comes from learning each of the game’s 14 weapons. While the move sets of each of the weapons in this entry are mainly derived from their already great Iceborne expansion counterparts, the addition of the wirebug and silkbind attacks adds a welcome new dimension of mobility and speed to every hunt. Players are now free to launch themselves into the air at will, run on walls, and rapidly zip around the monster to get into a more advantageous position in the fight. To match this newfound maneuverability, monsters are now inherently more aggressive and gain new abilities that put the reaction speed of established hunters to the test.

To further customize hunter’s playstyles, the development team drew inspiration from their previous work on Monster Hunter Generations and created the new switch skills system. This allows players to switch out three techniques from their favourite weapons move sets in exchange for new techniques that can completely change the way that weapon plays. Sadly, not all the skills are unlocked at the beginning for hunters to freely mess around with, but by advancing the main campaign players will unlock optional quests to unlock the moves for the specific weapon they desire.

A great example to illustrate this system is with one of my favourite weapons introduced way back in Monster Hunter Tri, the Switch Axe. Originally a very slow, but long reaching axe, that can transform into a quick slashing buster sword, the Switch Axe now has new life breathed into it for two different kinds of players. By focusing in on DPS techniques, players can quickly close the distance by flinging themselves into the air and launching towards the monster with a devastating dive attack. Follow that up with the weapons signature attack, the elemental discharge, and now the switch axe is nearly guaranteed to get into its activated state and deal out a world of hurt on whatever creature happens to be its next victim. On the opposite end, players can switch out those two techniques for moves like the invincible gambit and the compressed finishing discharge, which while not as strong, makes the hunter a knockdown resistant tank that will continue to deal out damage even when they are hit.

I never expected Monster Hunter would be a suitable playground to build an entire mode based around tower defense mechanics, but the devs at Capcom have surprised us all with the new Rampage mode. Players defend Kamura village by outfitting the surrounding stronghold with different armaments, including ballistas, cannons, and flamethrowers, with up to four players online against waves of incoming monsters. At first, the Rampage feels slow and rather easy, but as the waves continue to build up and throw stronger monsters into the mix, so to does the pressure and tension. Players will have to coordinate efficiently, planning out the best spots for different armaments at any given time and target the monsters whose goal it is to either smash the gates down or destroy all of your team’s turrets. The Rampage begins to reach its climax when the Apex monster arrives. These destructive behemoths level gates and turrets down to the foundation, leaving you and your team fighting it out to the end with only a few armaments left to defend yourselves and the village from total annihilation.

Overall, the Rampage mode featured in Monster Hunter Rise is a rather fun addition to the endgame grind, and replaces spirit gem farming in World by providing players with tickets they can cash in to amplify their weapons even further. However, I do have some disappointments. My first being that I wish the Apex monsters weren’t locked to Rampage exclusively. These monsters are similar to Deviants and Arch Tempered monsters in terms of difficulty and would be a great endgame hunt. Couple that with the fact that Rampage has no cart limit and I feel the mode is missing a degree of challenge. Hopefully in the subsequent title updates, Rampage will get some updates along with it to address some of my concerns and add in new gameplay elements keep the experience feeling fresh.

With nearly 40 large monsters to fight at launch, the roster of 14 new and 25 returning legacy monsters is truly one of the best lists featured in any Monster Hunter game to date. Series staples, including Ratahalos, Zinogre and Nargacuga, all make their boisterous return, but the new monsters take centre stage by showcasing why the wirebug was needed to combat such aggressive foes. In particular, Rise’s intimidating flagship fanged wyvern, Magnamalo, and the boggy leviathan, Almudron, stand out as my favourite fights in the game so far because they had me thinking of how best to use the wirebug to overcome their flurry of attacks and reach their weaker armored parts. Some may prefer the monster list of World with its huge list of Elder Dragons and Wyverns, but what I love about Rise and its list is how diverse the cast feels. Not only are dinosaurs and dragons here to play, but assortments of birds, spiders, serpents and beasts also call one of the five biomes found in Rise home, with even more on the way in the following free title updates.

The only thing that comes close to surpassing the feeling of overcoming that seemingly unstoppable monster that managed to cart you twice is using its fangs, scales and bones you carved from it to forge yourself some kickass armor and weapons. One of the disappointments I share with many players of Monster Hunter: World is that the weapon design for that game at times felt rather lazy, with many monsters having the same base weapon design, only adding some sparse monster materials to differentiate them from one another. This was especially sad to see for some post-launch DLC monsters, that despite having great weapon designs to draw from in each of their respective games, also had to suffer the same fate. Thankfully, I can safely say that design philosophy is gone in Monster Hunter Rise and replaced with great looking armor sets, and equally as exciting weapons that pack in just as much personality and character as the monster they were inspired by.

One of the few areas Monster Hunter: World has over Rise is in its environments and arenas hunters will explore when battling monsters. While I appreciate that maps in Rise feature no loading zones and try to add more character thematically with different shrines and cool outlook points, nothing here holds a candle to the eye candy of the Rotten Vale, the Elder’s Recess, or the Coral Highlands. However, this is an expected shortcoming since the reveal of Rise that I’ve been prepared for. Capcom prioritized gameplay and performance over graphic fidelity while developing Monster Hunter Rise primarily for the Nintendo Switch, and as a result, players are enjoying a nearly rock solid 30 FPS no matter if they’re playing on-the-go in handheld mode or in the comfort of their home on the TV. One improvement from this trade-off however, is that loading hunts in the hub and getting into the action is substantially quicker than the few minutes it felt like before a hunt would get started in World on Playstation 4 and Xbox One.

When the campaign of Monster Hunter Rise is all said and done, players are left with 3 primary activities that make up the endgame experience. This includes the previously mentioned Rampage mode, completing your list of armor sets and weapons forged from your favourite monsters, along with talisman farming. In comparison to the base experience of Monster Hunter: World, I love Capcom’s decision here to let players farm talismans, like in previous titles, instead of decorations. One of the major critiques of the endgame within World was that by making decorations RNG based, it was all up to chance whether players could optimize their builds. Considering these little craftable jewels make up 80% of your build’s enhancements, this change should allow players to craft stronger armor sets easier and give them ample opportunity to experiment with different weapon types with substantially less time investment.

Monster Hunter Rise is shaping up to be my favourite Monster Hunter to date. From the fluid and in-depth gameplay, to the ingeniously designed new monsters, to the insanely fun gimmicks that add new levels of mobility, Capcom has outdone themselves with their latest entry in the franchise yet again. What makes the deal that much sweeter it that this is just the launch experience. With more monsters coming down the pipeline and an inevitable G Rank expansion to rival the magnificence of Iceborne, I’m ready for hundreds of hours of my life to once again be absorbed by one of gaming’s best modern titles.

Monster Hunter Rise is shaping up to be my favourite monster hunter to date. From the fluid and in-depth gameplay, to the ingeniously designed new monsters, to the insanely fun gimmicks that add new levels of mobility, capcom has outdone themselves with their latest entry in the franchise yet again.
REVIEW SCORE
9.5
File Under: Capcom, Game of the Year 2021, Monster Hunter, Nintendo Switch