It seems like the early part of this relatively new game generation will feature a lot of games inspired by Dark Souls. That’s not necessarily a bad thing, especially if you’ve finished Dark Souls III and still have an itch you need to scratch. But with so many games borrowing from its combat style and insanely hard difficulty, it’s hard to find one that really stands out.  I wouldn’t be surprised if that was Harebrained Scheme’s idea when they made Necropolis, a game I was very excited to play after I tried a demo at E3 2016. Unfortunately, for a variety of reasons, the game didn’t quite turn out how I imagined, but is fun enough to come back to every once in a while. 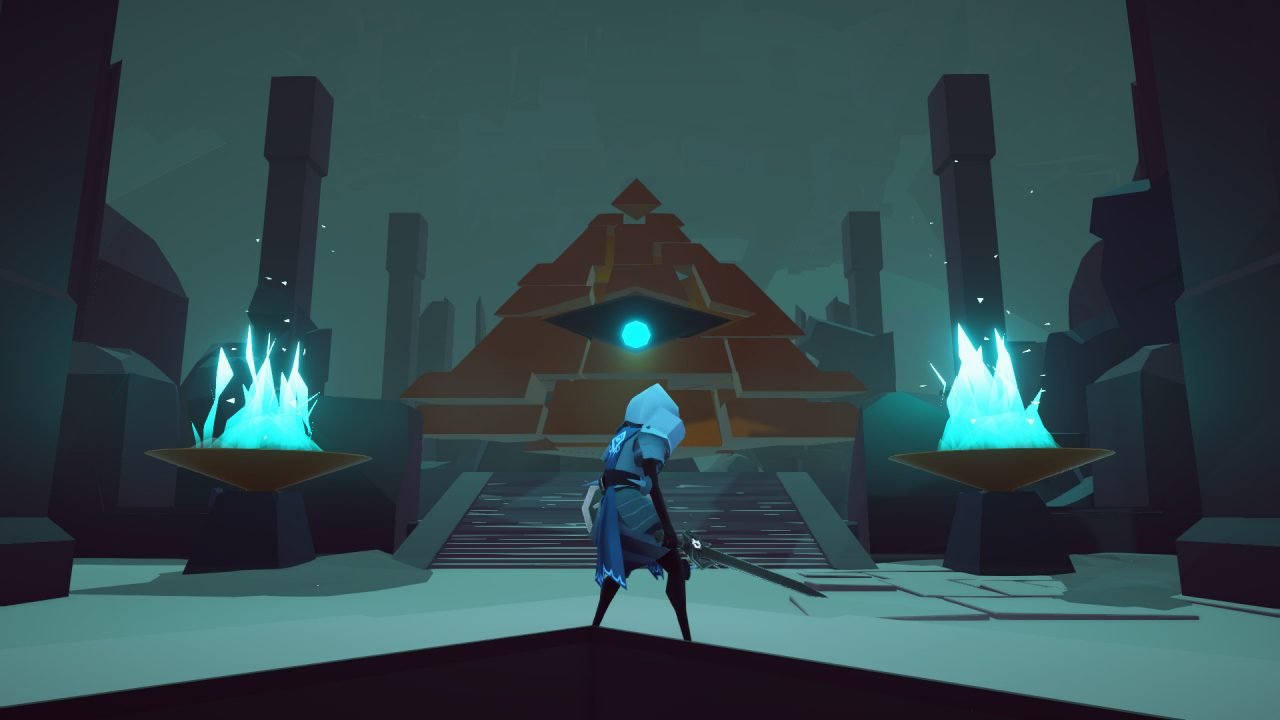 Much like Dark Souls, you play as a mysterious character in a world that slowly reveals itself in front of you the more you play. You (and three other players if you choose) enter the Necropolis and you’re trapped. The only way out is to keep going further down. That’s about as much as you really know about the lore in the game. There is a giant pyramid creature that tells you different stories every time you see him (we’ll get to that shortly), but aside from that, it’s more of a gameplay experience rather than a plot experience.

Unfortunately the gameplay is kind of lacking. You only have two attacks for the most part, along with a block and a dodge. There is a little bit of strategy involved as you have a rather small, quickly depleting—yet equally fast regaining—stamina bar that you need to keep an eye on during combat. While this is essentially the Dark Souls play style, there were a lot of issues with the Necropolis take on this concept. To start, I found that running backwards and waiting for the right time to charge and swing my sword as my enemy got closer was the most exploitative option.  That’s because most of the game’s difficulty doesn’t necessarily come from the toughness of enemies (like in Dark Souls), but from the hoards of enemies coming at you at once.  One on one, enemies were not difficult—at all—but eventually you can get surrounded. There were countless times during my playthrough where I ended up completely surrounded and killed. The combat is also kind of sluggish in many regards, forcing you to plan almost any attack you make a few seconds in advance.

Once you die, it’s back to the beginning for you, which is both a good and bad thing for this game. In many ways, it reminded me of my time playing games on my SNES or Genesis (yea, I was that kid that had both), sinking hours into a game, only to mess it up royally and get sent back to the start of the game. Since this isn’t a story heavy title, it’s not something I got overly frustrated with, and the dungeon randomly regenerates each playthough so it’s never completely the same. I actually thought it gave some real consequence to your death while never making you feel like you’re trudging through the same thing over and over again. On the other hand, when death comes kind of unfairly, it’s more frustrating than anything.  All your items reset as well, so every item you crafted; every sword you picked up along the way, every shield, and every potion is gone.

While your outcome in death is rather bleak, the game is very light-hearted.  If you’ve read any of my reviews or previews where a game attempts comedy, you’d know that it’s something I find it pretty difficult to pull off in a videogame setting. A lot of times it feels forced or try-hardy, but Necropolis absolutely nails its jokes. It’s never overdone and there is no voice acting—which helps a lot considering I can do the delivery in my head. The jokes were spaced out in such a way that it felt tasteful. It’s not necessarily a comedy game, rather a game that uses comedy to enhance the experience. That’s something I feel a lot of titles miss but Necropolis gets right. Even though you die a lot, the dialogue and prologue quips rotate so you have to be especially terrible at the game to really get tired of them. 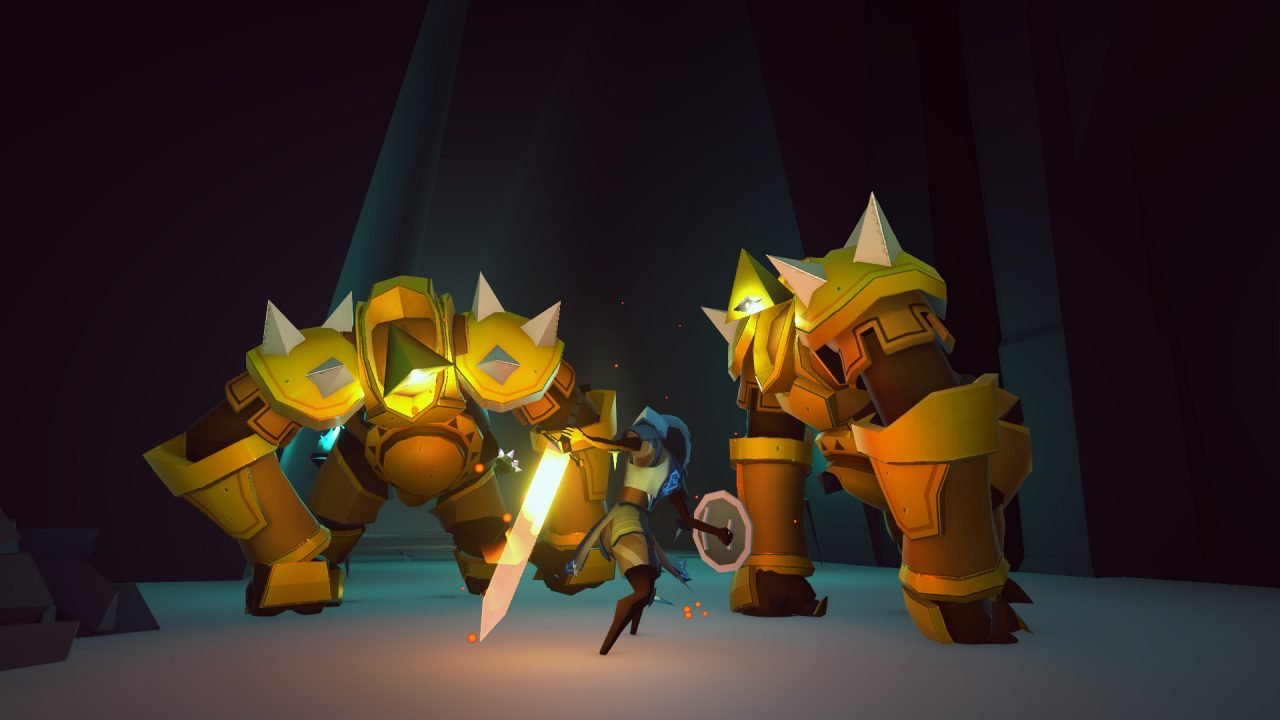 Mix that with a very interesting art direction, and Necropolis makes for a unique experience outside of its gameplay. Everything is polygonal and it almost looks like a cleaned up N64 game with less jagged edges and actual rendered backgrounds.  The main character—gender preference up to the player—looks eerily similar to the Poe Hunter from The Legend of Zelda: Ocarina of Time: a hooded warrior, draped in rags that cover most of his or her face with more simple pieces of cloth on the rest of the body.  Also, your starting weapon resembles a katana, which makes the main character one of the coolest designs I’ve seen for a playable character lacking any customizable clothing options. My favourite design (and character overall) was the Brazen Head. His appearance is rather simple and resembles a sort of Illuminati symbol (a pyramid with a single eye).  His various parts slowly drift away then come back together, making him a visually interesting, constantly moving design.

It’s small touches like that which make Necropolis a really interesting game to play. Unfortunately, the actual gameplay element falls so flat that it hurts everything else. There is no doubt in my mind that Necropolis was made with a lot of love and care, with great attention to the tone the game is trying to present. However, the clunky, repetitive gameplay and the difficulty that comes with waves of enemies instead of challenging combat makes it hard to have an entirely great experience. That isn’t to say Necropolis is bad; it’s fun, but very flawed.

Necropolis is worth playing mostly because of its commitment to a fun tone, but falls short when you actually have to play.
REVIEW SCORE
7.5
File Under: Bandai Namco, Harebrained Schemes, PlayStation, Xbox