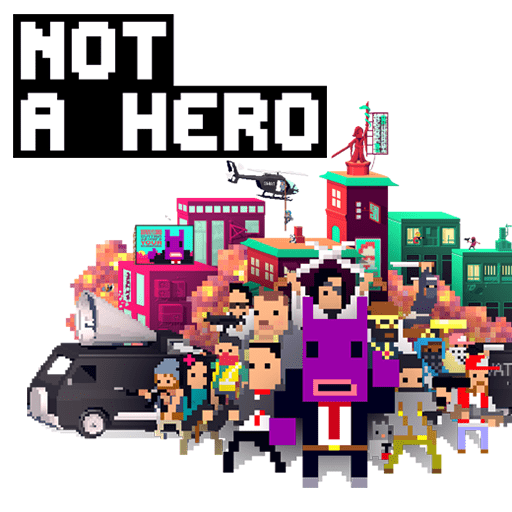 Cover-based third-person shooters have been all the rage since Gears of War popularized the genre, but Not a Hero takes that formula and applies it perfectly in a two-dimensional pixel art romp.

In Not a Hero you play as various hired henchmen working for Bunnylord, a giant purple rabbit who is hoping to be elected as mayor of his town. To guarantee election, Bunnylord has his hitmen killing local mob bosses, all disguised as doing it for the people when in reality is just serves to further his cause. The message of Not a Hero is that politicians will do and say anything to get elected, even if they don’t believe the words that are coming out of their mouths; I think that is a message we can all get behind.

Each level takes place in one day leading up to the election, with 21 days on offer. At the start of the day you’re briefed by Bunnylord whose voice sounds like an adult from a Charlie Brown cartoon. Levels consist of colourful buildings with stairwells to climb or descend, and windows to heroically slide out of, instead of jumping.

Not only are players exploring the levels, but they are violently gunning down tons of enemies, “Killing them in the face” as Bunnylord says. The control scheme is simple: one button to shoot, another to use specialty weapons, such as grenades, found scattered throughout level, and a reload button. Most importantly is the slide button, which allows you to trip enemies and take cover. Instead of hiding behind waist-high walls like other cover-based shooters, you’ll be tucking yourself in the shadows behind pillows, doorways, and so on. You can then quickly pop out to shoot enemies before going back to cover to reload. It might not sound that exciting but it works out pretty well.

There are, however, three problems that plague Not a Hero: length, repetition, and difficulty. Since there are only 21 stages on offer, with a few extra hidden ones to boot, the game is over almost as quickly as it began. Taking into consideration that some levels can be completed in under two or three minutes unless you’re a completionist getting every one of the optional goals offered per level, you’re going to be finished pretty quickly.

After completing a few levels, I couldn’t help but feel like I was essentially playing the same level over and over again, just with different paint jobs. Feeling like a game is repetitive when it also a short experience is never a good thing.

And finally, the difficulty problems. Late in the game enemies are introduced that cannot be tripped with a slide, and also kill you in one hit. Sliding does, however, make them jump out of the way temporarily. Suddenly I went from breezing through levels to restarting levels over and over again in an attempt to get past all the enemies that kill in one hit. Otherwise, the rest of the game was a breeze, though if you want to complete each level’s three optional goals, you’re going to have a much harder time.

One thing I loved about Not a Hero is its fantastic soundtrack filled with electronica and chiptune songs that made me nostalgic for years past. Chiptune may not be for everyone, but this reviewer is a big fan, and I found the pacing of the music matched the gameplay and colour aesthetics nicely.

If you’re a fan of gory, pixelated, 2D shooters with a whole heaping of voice acting laced with swearing, then Not a Hero is easily recommendable, especially if you’re a completionist due to the brief length of the game otherwise. While not a perfect game, it is a fun little title with some big style that is a worthy distraction of your time.

One thing I loved about Not a Hero is its fantastic soundtrack filled with electronica and chiptune songs that made me nostalgic for years past.
REVIEW SCORE
7
File Under: Devolver Digital