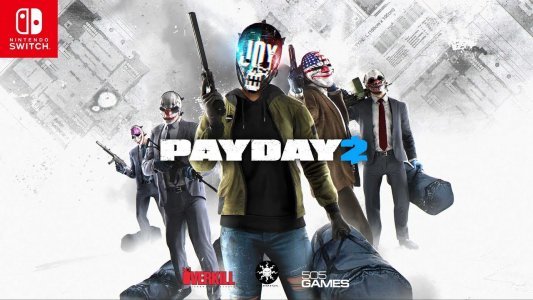 Payday 2 has always been a thrilling experience for me. There is something about placing myself in the shoes of a criminal with my friends that feels entirely surreal, in ways that are for the most part indescribably exciting. With this in mind, Payday 2 for Switch was one of my most hyped releases of 2018, and for the vast majority of its gameplay, it left me satisfied.

For most, myself included, picking up Payday 2 on the Switch is a question of how the platform can handle it. To my surprise, it handled the original content from its PlayStation 3, and Xbox 360 releases quite well. The PlayStation 4, and Xbox One missions were no slouch either, but I did notice that the Switch had a tougher time keeping a steady framerate on those occasions. Most notably, the game’s stealth tutorial gave me frames that were sometimes in the single digits. While this was solved with a simple reload of the mission, it left me worried that it could ruin the first time experience for many newcomers. Beyond that, however, I would say that for anyone that was worried about performance, Payday 2 on the Switch is no slouch.

New to the Switch is its use of HD rumble through the joy-cons. In my experience, HD rumble only added a small touch of realism to the overall experience, by offering distinct levels of vibrations depending on whether I was firing my gun, or lock picking a bank’s vault. While these additions bring me hope as to what can be done with the Switch’s HD rumble in the future, I just wish that developer OVERKILL implemented it better with Payday 2’s content to fully utilize the hardware.

Speaking of content and additions, the Switch version is in my opinion, the ultimate way of playing Payday 2 in a console. Not only do players get all the previous console missions, but Payday 2 on the Switch also introduces one brand new playable character: a 22-year-old Japanese hacker named Joy. Though I appreciated the character design for Joy, and her LED mask that quickly became my favorite, I found that Joy’s voice acting left much to be desired by sounding both dull, and monotone. This isn’t to say that it is a bad addition, because it introduces more playable female characters to Payday 2, something that in my opinion has been clearly missing for ages, but I just wish that there was a bit more.

The need for more polish remained a constant theme throughout my playthrough of Payday 2. While the game runs great, its graphics can be a bit outdated at times. A quick comparison to older console variants quickly revealed that despite having some excellent lighting, some textures appear to date all the way back to its original PlayStation 3 release. To further prove my point, I couldn’t test out the online, which is fine considering I was one of few reviewers in my region, but depending on the bots quickly proved just how outdated Payday’s 2 AI can be. From teammates that fail to cover you when you most need it, to cops that sometimes ignore for no discernable reason, Payday 2 certainly can at times feel like a game from 2013, rather than a brand new release. Sure, Payday 2 is a co-op focused game, but in my opinion, OVERKILL needs to release some serious updates in order to provide more responsive AI so that those of us that don’t have a constant WIFI connection can still enjoy the experience.

This isn’t to say that the entire game is broken because it really isn’t. If there is one thing that OVERKILL deserves applause for, it’s that they were able to beautifully maintain Payday 2’s insane thrill throughout the porting process. For Switch only owners, this means that you can expect the Switch’s most intensive, most adrenaline focused coop experience on the platform as of yet, and in my book that is a great achievement. But for those that have already played the games on other platforms, Payday 2’s transition to handhelds can be a mixed bag, providing tons of enjoyment, but only if you’re willing to overlook its clear downsides.

At the end of the day, my hype for Payday 2 on the go was satisfied. I received an experience that not only takes the thrill that I initially poured hundreds of hours into with my friends on the PlayStation 3, but in some regards manages to improve it. Yet despite bringing all the content for its plethora of releases, Payday 2 simply needed a touch more polish to truly feel at home on the Switch. If OVERKILL continuously supports this version of Payday 2 like it supports its PC counterpart, I see a vivid future where rare random framerate issues, unresponsive AI, and blurry textures can truly be a long forgotten memory.

Payday 2 has finally arrived on the Nintendo Switch, but it turns out to be more of a mixed bag, than flat-out perfection.
REVIEW SCORE
7
File Under: Co-op, FPS, Payday 2, Starbreeze, Switch games