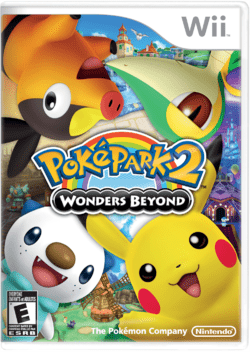 Nintendo has long branded itself as the Disney of the videogame world. While Sony and Microsoft are constantly discovering new ways for players to machine gun and chop up fresh characters, Nintendo prides itself on simple, fluffy, family-friendly entertainment. When you’re talking about games like Mario Galaxy or the latest Zelda epic, the company cranks out stunningly-crafted and all-inclusive experiences guaranteed to make any player feel like a giddy eight year old discovering videogames for the first time. Then there’s Pokemon. The franchise is one of Nintendo’s staples, but with the exception of the fairly deep RPG-lite handheld titles, these games are really just for kids. We’re talking about cute little animals bumbling around and getting into magical fights and there is an unavoidable age cap on that experience. PokePark 2: Wonders Beyond is Nintendo’s latest console Pokemon effort and presumably the final one that will be produced for the Wii. It’s an almost obnoxiously cute little timewaster that I’m sure will please the pint-sized target audience while leaving anyone old enough to remember a world without Pokemon in the cold.

Story has never really been the strength of the Pokemon series (did you ever try to follow the “plot” of the TV show? Well, don’t) and PokePark 2 is no exception. It’s about evil creatures kidnapping Pokemon from their PokePark home and transporting them to the dark n’ brooding Wish Park where they are hypnotized by cake. Yep, that’s the plot and it makes about as much sense played out over a full game as it does in that single mind-numbing sentence. You play as Pikachu, Oshawott, Tepig, and Snivy. Much of the game consists of roaming around PokePark and befriending other Pokemon (via a menu based Pokedex-style system) to find ways to slip back into Wish Park and save the cake-munching lost souls. You can only play as one of those main four characters, but you’ll encounter about 100 or so other Pokemon along the way and make friends with them by either getting into a fight, getting into a chase, or playing one of a handful of mini-games.

The game is controlled by holding the Wiimote on its side. This lends itself to a simple button layout, but with only a single D-pad for movement, it’s far better suited to sidescrollers than 3D games and there will be camera issues from time to time. Moving around the worlds can be a pain because these cute little fellas have tiny legs, making them incredibly sloooooow. You’ll find yourself constantly tapping the dash button and it never seems to be fast enough. The turn-based battle system of the core Pokemon titles is replaced by a simplified version routed mostly in button mashing. Again, it’s incredibly easy to use for little tykes playing this game, but until later stages with many enemies, the battles can be frustratingly easy. The mini-games are all variations on sidescolling platforming, simple shooters, and little puzzles. There aren’t many, but they are kind of fun and can be replayed in local multiplayer whenever you’re bored with the main quest.

As far as Wii titles go, Pokepark 2 is damn pretty with fluid animations for all the Pokemon and endlessly adorable visuals even in the loading screens. Nintendo clearly put a lot of effort into making this game look nice and children and single moms everywhere should enjoy playing through the game with frequent sighs of “Awwww! Cuuute!” It’s a good thing the game looks so nice because there isn’t much else going for it. The story is slow, daft, and at times incomprehensible. The gameplay is overly simplistic and repetitive. And unless you love playing minor variations on every mini-game ever made, you’re not going to get much replay value out of it.

However, I’m also theoretically a grown-ass man and this game isn’t for me. I’m certain that little kids who don’t yet have the maturity or gaming chops to plow through a World 8 Mario level or take Link out on his latest quest won’t have the same complaints as me. This is a game for children and it’s simple enough for inexperienced youngsters to pick up and master, while the minor increase in difficulty as it develops should keep them engaged. There’s virtually no penalty for losing fights and it’s practically impossible to impede the game’s momentum or screw up in any substantial way. So it’s custom made for inexperienced youngsters to dive into without fear of frustration.

If you’ve got an ankle-biter roaming around your house looking for a new reason to scream out “Pikachu” or you’re a Pokemon nostalgist and/or completist, Pokepark 2: Wonders Beyond is probably worth picking up. However, if you’re a gamer looking for something to bide your time until the next marquee release, I’d stay far away. There’s nothing much here to appeal beyond the cult of Pokemon. This title and franchise are for children and there’s absolutely nothing wrong with that. We all got into gaming through simple titles like this and stressed out parents need something to keep the kids quiet from time to time. I suppose this game will suit those needs just fine.

As far as Wii titles go, Pokepark 2 is damn pretty with fluid animations for all the Pokemon and endlessly adorable visuals even in the loading screens.
REVIEW SCORE
6
File Under: Game Freak, Nintendo, Pikachu, Pokémon, RPG, Wii