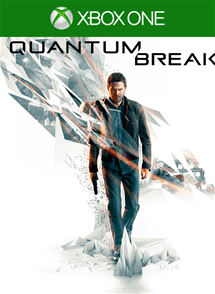 We’ve probably all had this question asked of us before:  If you could travel back in time and change one thing, what would you change?  Would you game the stock market and become a millionaire? Catch the one you let get away? Kill Hitler? All tempting options, but what if time as you knew it, ALL time, was destined to end in a matter of days? Would you use your ability to go into the past and do whatever it takes to stop it, or would you prepare to embrace oblivion?

This is the fundamental question that Quantum Break—Remedy’s long-awaited Microsoft-exclusive shooter—dares to ask, and this Friday Max Payne devotees will get to answer that question while doing what they love most in Remedy games: finding inventive new ways to slo-mo shoot lots of bad guys in the face.  In this regard, Quantum Break represents a more assured bet for financial success than its critically-acclaimed but widely under-appreciated predecessor, Alan Wake, ditching much of that game’s intended “thriller novel” appeal and doubling down on both its episodic TV show motifs and effects-driven action inherited from the Max Payne games.  But will the gamble pay off this time?

Quantum Break’s synopsis reads like a Hollywood blockbuster and boasts a cast of recognizable faces to match.  Protagonist Jack Joyce, played by Canadian actor Shawn Ashmore (X-Men’s Iceman), returns to his hometown of Riverport at the urgent request of his best friend and scientist, Paul Serene (Game of Thrones’ Aiden Gillen), who, working together with Jack’s estranged genius brother William, is on the verge of a revolutionary breakthrough in the field of quantum physics.  In film code, this of course reads as “We just invented a time machine that we’re recklessly going to test on ourselves tonight and we need your help, what’s the worst that could happen?”  Of course, things indeed go wrong when William (Lost’s Dominic Monaghan) tardily arrives during the test wielding a sudden change of heart and a loaded gun, causing an incident that leads to the time machine exploding with Paul trapped inside.  While all three survive the explosion, both Jack and Paul are heavily exposed to “chronon” radiation and emerge with the ability to manipulate time in various ways.  Further complicating matters, Time is quickly breaking down, freezing and warping reality in seizure-like death throes called “stutters”.  Even worse, the Paul Serene that emerges from the explosion is 16 years older, now heads a secretive technology firm called Monarch Solutions, and is hell bent on steering the world towards the “End of Time”, so much so that his first act is to kill the only person with the knowledge to stop it, William, right in front of Jack.

Naturally, players will take on the role of Jack Joyce as he comes to grips with his new abilities and attempts to thwart Serene’s nefarious plan, but in an interesting twist, at the conclusion of each act players will also take on the role of Serene, who at key decision making moments can see into the future and must choose between two actions that will influence how the future unravels.  These “junction” points are meant to have a dramatic effect not only on the events of the game (such as which characters that Jack interacts with will live or die or how Monarch will be perceived by the general public), but also what content resulting from those decisions players will see in the “Quantum Break TV Show”, a branching, four-part series that runs in-between the game’s five acts.  These 25-minute episodes show the dilemma from Monarch’s perspective, and focus largely on the actions of Serene and his henchman Martin Hatch (Fringe’s Lance Reddick) as they struggle to see their plans through to the end amid shifting loyalties and wavering morale.

Without a doubt, one of the best elements of Quantum Break is its story, which manages to tackle the much over-worn concept of time travel that we’ve grown accustomed to in movies in a surprisingly refreshing way.  The premise of time gradually breaking down and eventually “stopping” the world completely is an apocalyptic scenario that feels unique to the realm of videogames, and in this reviewer’s opinion the manner in which the story unfolds and escalates is right up there with some of the action-adventure genre’s best; the original installments of Metal Gear Solid and Mass Effect coming to mind in particular.  The dramatic tension that results from Jack and Serene’s opposing philosophies about the nature of time and the extremes to which both characters and their allies are willing to go in the name of those convictions is genuinely gripping.

As one would expect from a modern Remedy game, the graphics engine, appropriately named the “Northlight Storytelling Engine” faithfully delivers the visual chops required to convincingly sell Quantum Break’s tall tale.  The game’s varied environments—from Riverport’s run-down industrial zones to Monarch’s pristine, ivory tower offices—lend themselves beautifully to Remedy’s brand of Bullet Time hijinks, with destructible cover that splinters convincingly under fire and plenty of volatile gas tanks, parked vehicles and chronon containers that explode with impressive-looking-and-sounding pyrotechnics.  Set pieces in which stutters rend apart structures and then smash them back together (making for perilous environmental puzzles) are dazzling, and when players kill their first chronon-suited foe and watch him slow and stop within the frozen world of a stutter, their jaws will drop.  Of course, the real showstoppers are Jack’s time abilities.  Time Blast, for example, allows Jack to freeze one or more enemies in a time bubble and fire bullets into it, causing massive damage to those imprisoned when the bubble bursts.  Time Dash and Time Focus (Quantum’s version of Bullet Time) can be used in conjunction to body check an enemy at super speed and then unload a clip into his body as he reels from the impact in slow motion.

A Time Shield bubble can deflect incoming bullets while simultaneously healing Jack from injury, and Time Dash, Time Blast and Time Rewind can be used separately or together to help Jack get around the occasional obstacle or “stutter gauntlet” that stands in his way.  Regrettably however, there seem to be barely enough opportunities to exploit and have fun with these abilities due to the game’s streamlined, story-driven nature and limited encounters, and when playing I couldn’t help feeling that some of the Time Powers could have been implemented more creatively. For example, Jack can only rewind time to move obstacles, and never in combat. Imagine if the ability could be used to explore multiple attack options simultaneously, like in the action movie Next, or allow players to occasionally cheat death with a Forza Horizon-style rewind!  Also, some of the environmental puzzles that require the use of Time Rewind are obstacles that Jack should easily be able to surmount on his own, but he can’t because one invisible wall after another prevents him from doing so.  Case in point, he can easily clamber on top of a train car, but can’t climb on to the back of a small cube van that’s blocking a tunnel.

Finally, the Quantum Break TV Show, while decently produced, detracts from the overall product more than it enhances it.  The live-action component stars a handful of the cast featured in the game proper, but aside from the show’s most recognizable leads (Gillen and Reddick), most of the cast’s live-action counterparts don’t measure up in appearance or acting presence to their virtual selves, creating a sort of reverse-uncanny valley effect.  Nothing that occurs in these segments is more visually impressive than Northlight’s serviceable combination of in-game and CG cutscenes, and whenever scene-chewers like Gillen and Reddick are not on screen, the show’s narrative pace slows and the tension deflates.  It’s akin to watching an “OK” web series as opposed to a top-notch show that was crafted for television.  And since the episodes are designed by default to stream from Microsoft’s cloud servers, players without blazing fast internet connections will either have to put up with frequent interruptions and crashes while viewing or spend the extra time and bandwidth downloading the episodes for offline viewing (which clock in at 75.6 GB total, almost twice the size of the game).  If someone told me that the TV show was a leftover vestige of Microsoft’s failed Xbox Entertainment initiative, I’d be inclined to believe it.

As a marquee Microsoft-exclusive action title, Quantum Break delivers impressively on just about every front except that of content; it literally begs for a New Game Plus mode.  Players who finish it on Normal can play through it again on Hard, search for every chronon upgrade and collectible, make opposite junction decisions, and watch the alternative TV show storyline that results, but that’s about it.  That said, Remedy fans can rest assured that the multiple, not-so-subtle references to Alan Wake throughout the game are a strong sign that their favourite writer and his flashlight will be making a “return” if this game succeeds, so an investment in Quantum Break (a fun, solid game) could technically be seen as “paying it forward”.

...as a marquee Microsoft-exclusive action title, Quantum Break delivers impressively on just about every front except that of content; it literally begs for a New Game Plus mode
REVIEW SCORE
8
File Under: Quantum Break, Remedy Entertainment