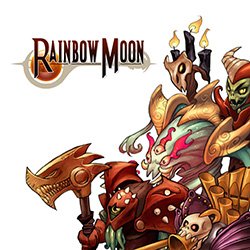 One of the proudest moments I had as a critic was a comment I received on the Miiverse when discussing the game Master Reboot. My feelings about the game have long since been on the internet, however it was upon trying to discuss it on the forum where I had initially played it that some user said “Well if you know so much, why don’t you make a better game?” To which I responded, “No, because when I don’t know how to do something, I don’t do it anyway and charge $20 for it.” I never received a response to that.

I bring this up because as I was playing Rainbow Moon, I found myself wondering if I could, in-fact, make a better game than what I was playing. I’ve played and reviewed enough games to know what works and what doesn’t, so why does it seem like so many developers don’t? It’s a wonder more game critics aren’t creative consultants on games.

Rainbow Moon is a strange little product. Initially released for the PlayStation Network on the PS3 and PS Vita in 2013. It was then re-released through PS Now on the Playstation 4, officially seeing a full re-re-release on the PS4 through the PlayStation Network. It tells the story of Baldren, a generic hero, who gets pushed into a portal by his arch-enemy which sends him to the world of Rainbow Moon. Baldren must battle enemies, fill the requests of townsfolk, and crawl through dungeons in order to return to his own world.

In my commitment to fairness, I’ve been struggling to think about the good of this game, before I get into the bad and all I can come up with is that, as a product, it technically works (by which I mean, it’s not broken).

The combat is monotonous and dull, playing by traditional turn-based RPG rules, on a Fire Emblem style, grid-based arena for whatever reason. Unlike Fire Emblem, where players would strategize their movements and plan the best course of battle, Rainbow Moon is slow-paced and boring as you either move one square at a time with horribly unintuitive movement controls, or sit back and wait for your enemies to move one square at a time towards you so you can pick them off one by one. This isn’t helped by terrible enemy AI that never learned how to flank, or item drops on board which can restrict enemy movement (which led to some hilarious moments where I shielded myself behind a wall of items, systematically taking out a line-up of enemies).

The game introduces a “sub-turn” system, wherein players can make two or more moves in a turn as they level up. You’d think that this was giving you an edge in battle as you’re often completely outnumbered and a mechanic like this would offer some balancing. But I quickly learned that most humanoid enemies also get this ability, and one particular part where I was faced one vs eight in a wide-open battlefield with no way to strategize or out-maneuver my enemies (this is where the aforementioned item wall came in handy). All this made for incredibly dreary fights, and could have been rectified by a clear focus; either committing to a full Fire Emblem style strategy RPG, or proper, traditional turn-based.

With many games I’ve reviewed as of late, I’ve begun to keep an eye out for presentation. Much like in cooking, a simple dish can be made all the better with elegant presentation and plating. Rainbow Moon’s presentation feels cheap. Animations are janky and stiff, music plays on a constant loop despite transitions to night and day, NPC characters stay in their designated areas despite day or night and the game’s isometric landscape and incredibly cluttered environments make navigating the world a linear chore.

The day to night transitions are particularly egregious, being nothing more than obscuring the landscape in pure blackness, save for a small radius surrounding the player. This makes sense in a game like Don’t Starve; however, with the turn-based combat combined with how players can always escape battles with no penalty, there’s virtually no threat to a monster lurking in the dark. What it ends up feeling like is a cheap attempt to simulate darkness. This is doubly annoying in dungeons, particularly when torches are made part of the landscape design, but emit no light.

If Rainbow Moon was a free browser game, I would say it was an acceptable first attempt. As a console release costing actual money, I cannot recommend it. It’s slow, dull, uninteresting, has no memorable moments or characters and is derivative of better games. This game should have stayed on the dark side of the Rainbow Moon.

Rainbow Moon is a strange little product. Initially released for the PlayStation Network on the PS3 and PS Vita in 2013.
REVIEW SCORE
5
File Under: PlayStation, RPG