Night of the Living Red Dead 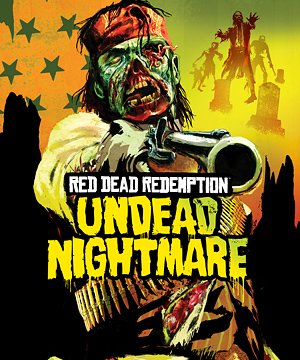 The Marston homestead is under attack. Not by government agents or vengeful road agents, but by a plague that’s turning honest, God-fearin’ folk into mindless monsters hell bent on devouring the living. Set near the end of the original Red Dead Redemption story, Undead Nightmare is the first major single player downloadable content pack for the title — and a fine entry that delivers plenty of new experiences for its fan

Undead Nightmare follows John Marston as he struggles to make his way across familiar American and Mexican haunts, now plagued by hordes of shambling zombies, and tries to find a cure for his infected wife and child. Many of Red Dead’s characters make a return in Undead Nightmare and, for those who completed the game, it’s a blast to see them in the context of a zombie apocalypse. Seth and Moses, Bonnie MacFarlane, West Dickens, Abraham Reyes and many others all pop up on Marston’s travels and react to the drastically changed world accordingly. New faces — victims and those holding up desperately against the plague — also appear and, as usual, are given the best possible treatment by Rockstar’s stable of gifted writers and voice actor Expect to hear modern social commentary (like the plague being brought to America by “the Mexicans or Catholics or homosexuals”) written into mission briefings and plenty of interesting conversations from a colourful cast.

Setting out into the zombie-stricken West at first feels familiar, but quickly enough the game demonstrates that, in presentation and basic gunplay, it’s very different. More than just a slapped-on skin, the DLC adds eerie rolling fogs, ambient instrumentals and sound effects that nail the proper atmosphere required for an immersive horror story. Coupled with the general desertion of towns and the mournful rains that frequently wet the landscape, the solo experience is very much unsettling and far more successful in harrowing the player than the tongue-in-cheek dialogue would suggest. The addition of undead enemies (and the requirement of successfully head-shootting each enemy) changes the required combat approach drastically and in a manner that makes Undead Nightmare feel, in many ways, like a fresh take on Red Dead’s original mechanic An array of new weapons accommodates this design decision well. The blunderbuss (a scattershot gun that uses zombie body parts as ammunition), “boom bait” (a zombie-attracting liquid with a dynamite core), a last-stand torch and other assortments of firepower add a welcomely ghoulish new arsenal that fits the DLC’s aesthetic and gameplay alike.

Unfortunately, the combat itself is often carried out in a fairly drab context. The two biggest additions to the gameplay are graveyard cleansing and survival mission Both modes make up the bulk of the single-player experience and, although fun at first, become a fairly tedious exercise as the campaign progresse This creates the niggling suspicion of developer time-padding in the back of their minds as players are forced to repeat the same exercises of torching coffins and assisting town resistances over and over again. While these tasks do make up the bulk of the experience, Undead Nightmare shines through when missions feature more varied scenario Times when the player is forced to defend a government train or explore a subterranean crypt emerge as the most thoughtfully produced segment More of these highly original scenarios and less of the repetitive tasks would have been very welcome.

Luckily, sidequesting and dynamic events have been given much more thought. Aside from the zombies, Undead Nightmare also features a host of mythical creatures roaming the landscape. Marston can break several new horses to add to his stable — War, Famine, Pestilence, Death and zombie breeds — and there are new animals to hunt through the addition of undead coyotes, mountain lions, wolves and bear Best of all is the inclusion of a tribe of sasquatches wandering the snowy hills of Tall Tree Tracking, taking down and discovering the origins of the legendary monsters provides what are probably Undead Nightmare’s most memorable moment

I Get By with a Little Help From My Fiends

Where most DLC packs are content to charge $10 or $15 for an extra couple of hours of single player (or, even worse, a handful of new multiplayer maps), Rockstar has given players an extremely substantial addition to work through both on their own and with their friend Eight multiplayer zombie characters and two completely new multiplayer modes make Undead Nightmare more than worth its price of admission — and also help players to overlook some of the solo experience’s drawback

Undead Overrun is tied to the tone of Undead Nightmare’s campaign and is a survival mode that, simply enough, asks the players to hold on for as long as possible against a sustained zombie assault. The undead horde comes at your position in increasingly vicious waves (announced by a gleefully pessimistic narrator who beautifully cops Vincent Price’s shtick) and the only objective is to kill them while retrieving supplies and new weapons from coffins that spawn at the beginning of each round. It’s a basic enough premise but offers a surprising amount of fun — and the chance to fully explore the best strategies for zombie-killing.

Undead Overrun has received the most attention but Land Grab, a non-zombified addition to Red Dead’s multiplayer, is worthwhile as well. It’s a simple concept — one player stakes a claim to a set piece of land on the map and others try to take it back through force — but it offers a new way to enjoy competition and even camaraderie through the establishment of a basic, focused goal that promises rich rewards for the winner(s).

The same problems that affected Red Dead Redemption’s multiplayer and single player are preserved here (occasionally clunky movement controls, long amounts of time travelling on horseback) but, once again, they’re minor enough that they shouldn’t bother most player Undead Nightmare makes it easy to ignore these issues in the same manner as its predecessor: by providing a package that is rich with content and is decked out with stunning production value. A host of soundtrack additions, fresh writing and a wonderfully realized atmosphere come together to ensure that players will finish their time with the game without dwelling on the negative

Undead Nightmare brings far more to the table than most DLC packs, offering a substantial single player campaign (my file closed out at just over 6 hours and 61% completion — without factoring in multiplayer) and a great, campy twist on the formula that made Red Dead Redemption such a joy to play through. If you’re not afraid to deal with the same old control issues and some repetition during the story missions, Undead Nightmare is an easy recommendation.

Undead Nightmare brings far more to the table than most DLC packs, offering a substantial single player campaign and a great, campy twist on the formula that made Red Dead Redemption such a joy to play through
REVIEW SCORE
8
File Under: Red Dead Redemption, Rockstar Games