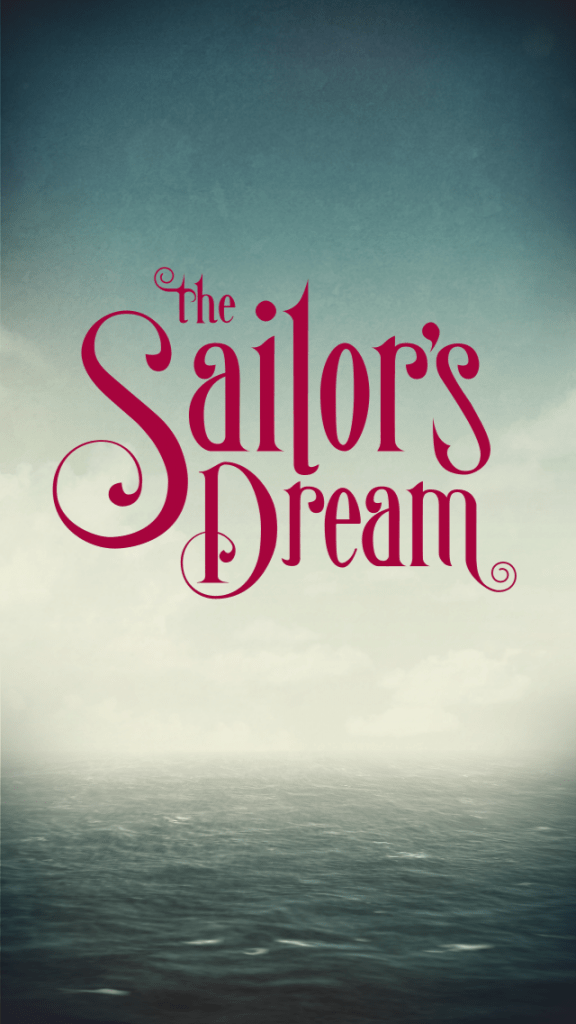 The first time I played a Simogo game was when I bought my first iOS device in November 2011; Bumpy Road was an endless runner merged with an unusual emotional tact. Year Walk released three months later, and I remember the winter morning I played it under a blanket, astonished by the adventure’s inventiveness, and in awe as the narrative unfolded to an unforgettable climax. I bought Device-6 last winter and, wrapped again in a warm blanket with a cup of hot chocolate, found myself in a similar awe. The Sailor’s Dream continues that legacy with a game that rivals Simogo’s very best efforts.

I’ve talked before about the poetry of games, and The Sailor’s Dream is exactly that. Split into four distinctive voices, the game offers different perspectives to develop a single, coherent narrative. The main voice is a collection of prose poems which follow, in third-person limited, the memories of a young girl who dreams of becoming a sailor. The game plays with the delivery of this text in a similar fashion to Device-6; the iOS device will need to be touched and tilted in order to scroll and read the text which sometimes finds itself landscaped. The writing is beautiful and the subtext in the language is complemented entirely by the non-linear fashion the story is formed.

Each of the poems are attached to items found in one of the four main islands in the game, obtainable in any order at any time. In a similar vein to the controls of Year Walk, players will swipe horizontally to sail between the islands, in beautiful parallax, or between rooms, and will swipe vertically to approach, ascend or descend buildings. It’s a simple scheme that offers a more tactile experience than simply tilting to control, and the game continues that tactility by offering interactive objects for you to drag and poke to create music or otherwise play with. Even in rooms without interactivity, Simogo has paid slick attention to detail; one room features a clock with a seconds hand that twitches too far past, before falling back into place, just like a real clock. Unlike Simogo’s last two adventures, there are no puzzles in the traditional sense of the word, but you’ll need to deduce the mysteries of the world in order to reach the game’s ending.

The second voice in The Sailor’s Dream comes from musician Jonathan Eng (who’s done music for every Simogo game thus far) and vocalist Stephanie Hladowski. Lyric poems, in the form of sea shanties, can be found in bottles floating in the game’s ocean between islands. Each song is a first-person account by a lonely woman who fell in love with a sailor. The shanties are evocative and punchy, and Hladowski’s vocals fit perfectly. The rest of Eng’s score is memorable and completely fitting to the game’s tone—a nervous balance between peppy and dreary with a deft emotional touch.

The sailor himself marks the third voice. By visiting one of the secondary islands during special conditions, players will unlock audio diaries in the form of short soliloquies which more explicitly tie together the characters of the story. Powerfully performed by voice actor R. Bruce Elliot, the diaries ooze with a captivating, restrained emotion: “The sea is beautiful from land. The land is beautiful from sea.” I found myself closing my eyes and absorbing myself in the sailor’s world as I listened, imaging the woman and the girl whom were so pointedly painted by the game’s other voices.

The fourth voice, and perhaps the most important, is found at the bottom of each of the prose poems: a tiny little print button. I was taken aback at first, wondering why it was there (other than to have nice prose poetry printed that is), but knowing how unconventional Simogo can be, I decided to dust off the old printer. What I found was the epitome of Simogo’s design philosophy: use the iOS device itself, as a platform, to tell the story. Year Walk’s companion app did something similar, but the print option is brilliant in that it’s not necessary to fully enjoy the story, but it helps conclude the narrative with a resonance unparalleled. If you don’t have a Mac or an Airplay printer, I’d recommend you consult this thread so as not to miss out.

Every single aspect of The Sailor’s Dream is polished and intuitive to the iOS platform. Between the writing, sound, art, and game design, no single area stands out as stronger or weaker, instead each is remarkable and complements the game as a whole. Simogo’s design philosophy shines here more than ever; The Sailor’s Dream is a game about grief and solitude on a platform that’s inherently solitary, and it offers players a brief escape into a tiny, but vast, world in their hand, just on occasion. When you finish reading the memories on each island, you exit by ascension; you pull down on the screen, and Simogo asks you to simply “let go.”  The Sailor’s Dream never asks too much, but it offers the world. It’s Simogo’s masterpiece of design.

The Sailor’s Dream continues that legacy with a game that rivals Simogo’s very best efforts.
REVIEW SCORE
9.5
File Under: iPhone