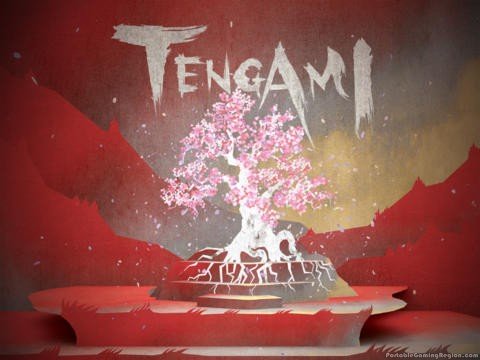 It’s not at all difficult to get sucked into Tengami’s vibrant and beautiful world. Jagged paper craft cherry trees dot the colorful horizon, rolling hills tumble across the background, and water courses lazily through the countryside as an ethereal accompanying soundtrack lends the setting an uncanny, yet tranquil feel.

No, what’s difficult is staying engaged with its world mere minutes after having had the chance to explore it. At first it’s a wonderful sight to behold, but appreciation of its beauty quickly devolves into frustration and disappointment once one begins to engage with its mechanics, puzzles, and actual gameplay.

Dreams play a major role in Tengami, which tasks players with helping a lone man recover those he has lost. Taking the form of Japanese cherry blossoms, these dreams are obtained after each of the game’s levels have been completed, also continuing its pervasive Japanese influence by rewarding players with a haiku at the discovery of each flower that helps to explain the character’s journey.

Essentially a point-and-click adventure, a majority of the time spent with Tengami involves guiding the character along a 2D plane, manipulating its pop-up book world by using touch controls to fold and unfold specific parts of the environment. This control worked well on a touch screen (it’s unclear as to how well they’ll work once Tengami is eventually ported over to Mac, PC, and Wii U) but it also plays a major role in one of Tengami’s flaws: puzzle solving. Figuring out the puzzles in Tengami is an often harrowing task, as environmental cues and deductive reasoning play little role in solutions, and there’s a lack of continuous logic to the puzzles that allows players to follow any consistent theme that might lead them to possible answers. Because of this, many of Tengami’s puzzles devolve into frustrating bouts of trial-and-error that offer up little satisfaction once solved.

This is only made worse by the fact that the main character moves at a slow pace even a turtle would find amusing. On the surface, it’s understandable why making the character move slowly would be a deliberate design choice; the game is a calm and somewhat meditative experience, and moving lethargically through the environment plays up the dream-like feel of the game and allows one the time to properly take in its surrounding beauty. However, certain puzzles require a fair amount of backtracking, and moving slowly makes for a tedious and cumbersome process that quickly turns from dreamlike to maddening.

Even more frustrating than Tengami’s puzzle design is the game’s failure to fully realize its true potential. It’s not offensively broken or terrible, but it also isn’t the absolute pinnacle of adventure game design. Instead, it rests somewhere in a boring middle zone, constantly taking missteps and finding its way back again with a mixture of ideas both good and bad. Its dark fairy tale influence is largely squandered as well, forgoing any sort of magic or myth and instead treating us to occasional oddities like hidden caves, secret passageways, and dangerous wolves. The game’s relatively empty and limited world would have benefited greatly from more of the magic and whimsy it initially seemed to embrace, but never fully capitalized upon.

Ultimately, it’s the rolling hills, gnarled cherry trees, waterfalls, and vibrant uses of color set in a Japanese pop-up book world that makes developer Nyamyam’s debut iOS title Tengami something of a visual marvel. However, looks can only carry a game so far, and like an attractive person with a vanilla personality, Tengami lacks substantive gameplay and consistent logic to back up its otherwise wonderful aesthetic.

Dreams play a major role in Tengami, which tasks players with helping a lone man recover those he has lost.
REVIEW SCORE
6
File Under: Adventure, iOS, Japan