Shadow of the Beast (PS4) Review

Shadow of the Beast, developed by Heavy Spectrum Entertainment exclusively for the PlayStation 4, is a remake of the classic Commodore Amiga game from 1989. Updated for modern gaming audiences, Shadow of the Beast 2016 focuses on improving the boring combat of the original with flashy animations and new mechanics to increase its depth. Unfortunately, the platforming elements of the game did not receive the same treatment.

Shadow of the Beast places players in control of the powerful beast, Aarbron, who suffers from being a mind-controlled weapon to evil sorcerers. When Aarbron kills his father in his attempt to steal a chosen newborn, the beast breaks free of the sorcerers’ shackles and seeks revenge on the evil forces that stripped him of his past and turned him into a monstrous warrior.

Shadow of the Beast is a 2-D action platformer. A majority of your time will be spent navigating the levels and climbing set pieces, but the real fun is had during the combat encounters. These encounters pit Aarbron against waves of enemies that try to overpower him with sheer numbers. They feel similar to Arkham style combat as you attack, stun, evade and parry enemies until only you remain standing. When Aarborn gets hit during an encounter you feel like you’ve lost all your built up momentum and the cannon fodder you’ve been completely destroying until now suddenly becomes a deadly force that can quickly drain your health as you try to recover. The combat feels just as vicious as it looks and you acquire a real sense of mastery when you flawlessly kill an entire group of enemies.

As Aarbron kills, he absorbs the blood of his foes and fills up his blood meter. This meter gives players the ability to use powered up moves that can increase Aarbron’s health, score, or when completely filled up, initiates a rhythm based mini-game that instantly kills any type of enemy as long as you remain on beat. The powered up moves that can increase the score or Aarbron’s health don’t feel like they are worth the meter because of their shockingly long start-up time before they are used, which can instantly ruin your momentum if you don’t time them accordingly.

Aarbron’s quest to kill his masters sets him on an insanely bloody and violent journey through six unique nations in the world of Karamoon. Each level has its own unique gimmick to change up the platforming sections along with it’s own set of native enemies to fight. Unfortunately, the levels feel very linear compared to the Amiga original and the few puzzles you’ll encounter are practically spelled out for players to solve. There’s just no difficulty to Shadow of the Beast, even death is just a small progression breaker that resurrects Aarbron in the exact place he died. I was able to breeze through minutes of exploration by simply jumping of certain places in the environment and dying, my only penalty was seeing a game over screen and picking the resurrect option.

After beating a level, you’re scored on how flawless and stylish you were during the combat encounters as well as how many collectibles you acquired. The score is then transformed into a currency that you can use to purchase upgrades, runes and moves for Aarbron to use as the game progresses. This is where the low difficulty becomes a problem again. I only bought a single health upgrade for Aarbron during the whole journey and even that felt like a waste of points in the long run. The majority of my points were spent on unlocking cool concept art, the original game and language decipherers so I could understand what certain races were saying during cutscenes. 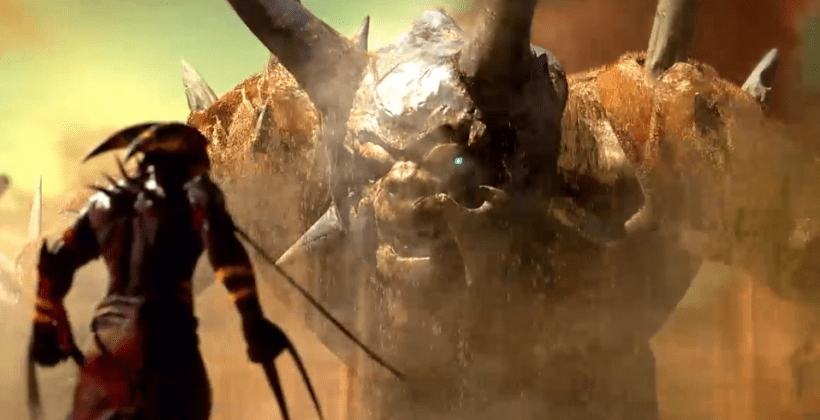 Shadow of the Beast suffers from an extremely short run time, which is just about three hours of playtime before the credits roll. While the game promotes replayability through it’s various collectibles and handful of unique endings to unlock, I have no interest in exploring the world of Karamoon any further. The reason for this is because most of the story and lore that I didn’t understand during my playthrough was unlocked in the bestiary, which details the motivations of the many races and how they impact the world. The short number of collectibles I did unlock gave more context to the events happening in the world, but much of the content felt like it was just reworded from bestiary entries.

I was excited for Shadow of the Beast the moment I played it at PlayStation Experience last year. I felt it was rough around the edges, but I thought that the game had some great production values for an indie game and the combat mechanics were genuinely fun. Unfortunately, I thought that Heavy Spectrum was going to treat the platforming mechanics with the same amount of care and the studio would work on fixing the rough parts of the game until its release. Shadow of the Beast still impresses me visually and the combat remains fun, but the game suffers from a number of poor design decisions that greatly impact the experience.

Shadow of the Beast has impressive production values and combat mechanics that improve over the original, but weak platforming and poor design decisions greatly hamper the experience.
REVIEW SCORE
6.5
File Under: PlayStation, Remake, Sony