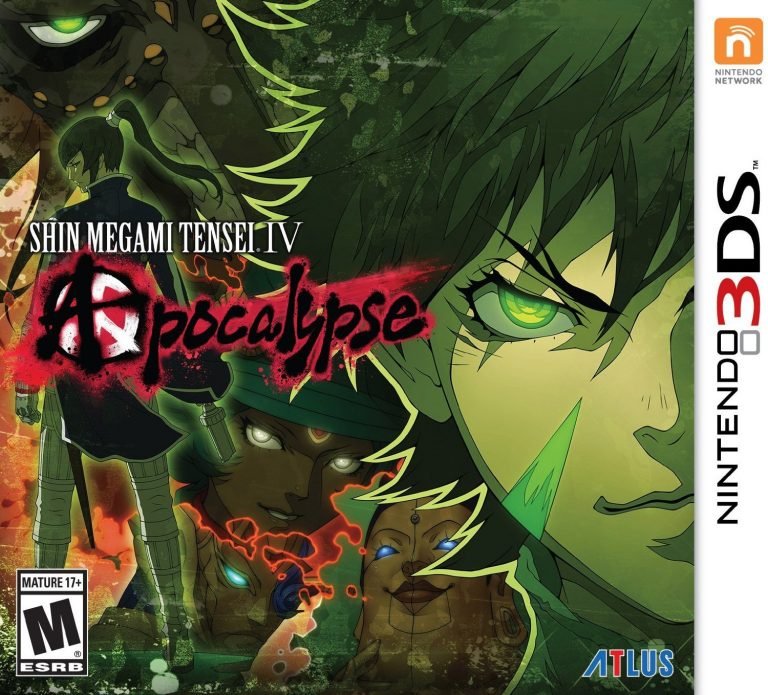 Shin Megami Tensei IV is one of the strongest JRPGs on the 3DS. That’s saying a lot, considering that the system is somewhat of an RPG powerhouse. Developed by Atlus in 2013, the game left most players who picked up the turn based demon-hunting RPG eager and wanting more. I was one of those people. It was my first foray into the series, and it hooked me to the point where it’s now one of my favourite franchises. So when Atlus announced a direct sequel to the game I fell in love with, I made sure I got my hands on it, and if we’re being completely honest, Shin Megami Tensei IV: Apocalypse is not going to leave my hands for quite some time.

Shin Megami Tensei IV: Apocalypse serves as both an entry point for new players, and a continuation for those who played the previous title. It picks up the story from a different perspective, sometime around the last act of the previous game. Flynn, the protagonist of the last game, is looked at as a beacon of light, legitimately ridding most of Tokyo’s demon troubles. Humans are relegated to underground cities because the dangers of demons, so groups known as “hunters” go out, capture them through cell phones and try to run supplies to keep things running smoothly. That’s where we meet our protagonists, two 15 year olds on the cusp of becoming full-fledged hunters.

That is, until one dies and strikes up a deal with a demon to return.

It’s good timing, considering humanity is about to be caught in a war between God and Lucifer. They need as many warm bodies as they can get. Death was probably the best thing that happened to this teenager, because he comes back much more powerful, as well as getting a fully functional phone with a demon. One thing leads to another and you’re rewarded for your heroism by actually becoming a demon hunter.

That’s as much as I’m comfortable talking about. I really enjoyed the story of Shin Megami Tensei IV: Apocalypse, even more than the previous title. The original game did a great job of presenting this whole world from the perspective of someone who’s never seen the decrepit city of Tokyo. That said, I enjoyed the story told by someone who’s grown up only knowing fear and danger. They’re familiar with the city, and as someone returning to the game, that familiarity was passed on to me.

Shin Megami Tensei IV: Apocalypse’s story is told through still dialogue heavy cutscenes, with some barely animated sections for really important parts. I was always annoyed with that kind of storytelling as it kind of feels lazy, especially considering how much work and detail goes into cutscenes for something like Fire Emblem: Awakening. I guess it balances out considering the actual gameplay for Shin Megami Tensei IV: Apocalypse is much more detailed. While combat features limited animation, the designs of both angels and demons are visually striking, looking like they’re straight out of Magic the Gathering at points.

It also doesn’t hurt that Shin Megami Tensei has one of the most enjoyable combat systems of any JRPG. It’s simple, but with enough nuance to keep every battle interesting. If you’re new to the series, imagine a significantly deeper Pokemon. You, along with four demons, square up against other demons in turn-based combat. The number of actions you take is dependant on turn icons, which are normally a move per party member.

That can change if you can exploit an enemy’s weakness or vice versa. Both you and your opponent can earn extra attacks or gain “smirk status,” a temporary boost that allows its user to land 100% of your attacks. On top of that, opponents of those who gain “smirk” can’t land critical attacks or take advantage of any of your weakness. This only ends if you’re infected with a status ailment or if the streak runs its course after several turns.  With that in mind, momentum plays a huge part in your strategy.

Another part of your strategy is knowing how to recruit demons. During random encounters, players can talk to demons. If you’re smart and can catch on to certain patterns, you can enter into a negotiation process with your adversary. This turns into a bit of a bartering process, where they’ll ask for certain items, macca (money) or even health, but players need to be wise in how they go about negotiation. If you give a demon too much, they will leave. If you deny a demon too much, your battle will continue, and sometimes you lose all your turns.

If you manage to convince a demon to join you there are a bunch of options for you. You can insert them into your team, where they’ll level up with you and offer to teach you new moves. You can keep them in reserve just in case, or there’s a third option—demon fusing. It’s my personal favourite option, and it’s something I spend most of my time looking through when I play these games. If you so choose, you can take your demons and fuse them together to make other demons. There are level restrictions, but it’s a very good way to beef up your roster while clearing up some space for fresh blood. There are recommended fusions to choose from, but if you choose to, you can specify which demons you want to fuse to get a more defined outcome. It’s worth trying both, but generally the recommended fusions are your best options.  Regardless, it’s something that makes Shin Megami Tensei unique, and more than just Pokémon for adults.

If I were to draw up any complaints for this sequel, it has to be the lack of new content. The game feels almost exactly like the previous title, with some small changes. Some changes are really small, like certain moves having different effects while smirking, but there are more significant changes as well. One such alteration is the choice to actually pick your partner that goes into battle with you. In the past title, when you fight your storyline teammates work as sort of a support for you, but you have little influence over who tags along. Meanwhile, Apocalypse features different partners to choose from that compliment different play styles. Personally, I preferred my starting partner who specialized in healing, but that’s because my aggressive style leads to me using up a lot of magic quickly making my healers low on MP sometimes. I also read a lot about updates to the demon negotiation system, where you can now pick up negotiations where they left off if they fall apart. I didn’t notice much of a difference since the entire process is just a back and forth barter. It’s a change, but a hardly noticeable one.

Every tweak is so minor it’s really hard to point out anything different about the game. It’s not a bad thing in some ways. There is part of me that wishes I could have an experience with Shin Megami Tensei IV: Apocalypse like I did with its predecessor. I still have trouble walking away from this game, much like before, but there’s a little too much familiarity.  That may be a little unfair, considering Shin Megami Tensei IV was my first step into the series, and I’ve since played a lot from Atlus’ franchise. Still, it’s something that stuck with me my entire playthrough.

Regardless, I loved every second of Shin Megami Tensei IV: Apocalypse, because I loved the game that came before it. From the combat to the visuals, Atlus nails it every time they bring this series back to the 3DS. With a new story that takes place during a familiar time period, old fans will surely want to play. On the same token, accessibility and commitment to keeping the story focused on these new characters make it very easy for new players to jump in. This a must have title for your 3DS collection if you’re in the market for a new RPG.