I was a little worried about Shin Megami Tensei V, after the initial trailer reveal back in 2017, the game went dark with snippets of gameplay held back till only recently. Coupled with the rise in popularity of games like the Persona series and the last mainline entry into the SMT series relegated to the Nintendo 3DS, SMT V felt like it could go either way when it eventually Saw release on the Switch.

Thankfully, Shin Megami Tensei V is not only a worthy successor of its 3DS predecessor, but the title also manages to eclipse Persona 5 in its overall scope and presentation. Like previous entries in the series, Shin Megami Tensei V primarily takes place in a post-apocalyptic Tokyo, with the player assuming the role of an unnamed high schooler. Quickly, the player is granted the ability to jump between a contemporary cityscape and the demon-infested ruins of Tokyo thanks to the aid of a mysterious alley that transforms the player into the Nahobino.

In terms of atmosphere and overall mood, Shin Megami Tensei V feels closer to the third entry in the series, Nocturne, with the added narrative chops found in the Persona series. Ultimately, Shin Megami Tensei V masterfully bolsters both a strong emphasis on characters and the setting, giving both a fleshed-out world to explore and cutscenes that feel fully realised and engaging.

“Shin Megami Tensei V, instead, offers fully realized maps that feel like mini sandboxes in their own right.”

Unlike the Persona games, which feature specific isolated dungeons separate from the central hub, Shin Megami Tensei V, instead offers fully realized maps that feel like mini sandboxes in their own right. Strong art direction and the larger scope of the maps give the game a semi-Open World feel that, despite primarily featuring destroyed cityscapes and ruined urban environments, feels more distinct and realized than previous entries in the series.

The larger explorable maps consist of NPCs, often giving the player quests and hints about how to proceed, free-roaming demons, collectable goods such as Demon Essence and Glory, imperative items required to unlock additional skills that help the player in and outside of battle.

Abscesses aren’t the only instance of strong demon encounters, as players can also encounter substantially stronger demons walking about the map. These special demons tend to stick out and appear as larger icons on the mini-map and are often best dealt with after the fact. Speaking of the mini-map, Shin Megami Tensei V does a great job in making things easy to read and follow; one aspect which I found incredibly tedious in SMT IV is now straightforward despite the substantially larger and more intricate levels.

“Shin Megami Tensei V’s narrative feels like the natural evolution of the character-driven stories found in the Persona games and SMT IV Apocalypse.”

As mentioned in my preview, fast travelling, demon summoning, and more can now be accessed via Leyline Crossings, founts of demon energy that act primarily as save points that are found evenly distributed throughout the game’s various maps. Atlus graciously made sure to include a healthy number of these save points, as SMT V, particularly later on, can get rather tricky, with instant game overs and hidden threats abound, making use of frequently saving a must, especially after a long grinding session.

Minor gripes I had with my time with Shin Megami Tensei V are mostly that of some uneven spikes in difficulty, particularly in the Chiyoda area of the game, which features an optional encounter that instead, felt very much forced on to the player, giving the impression more akin to padding than a worthwhile side venture.

Outside the impressively larger scope, Shin Megami Tensei V’s narrative feels like the natural evolution of the character-driven stories found in the Persona games and SMT IV Apocalypse. With the story embellishing not only the plight of the human characters but the demons as well, with its primary focus being on a battle between Angels and Demons, heavily borrowing elements from the Book of Genesis (in a story that is sure to make any pastor scorn in protest, harder than finding a stray Pokémon card amongst the tithe).

Finally, narrative choices make a return in SMT V. Thankfully, these are more transparent, giving those players wanting to get a specific ending an easier route to follow without resorting to a guide.

Shin Megami Tensei V is an excellent Switch exclusive worthy of its name, with the game feeling like the natural next step in the long-running series while introducing new elements that elevate it above even its contemporaries while not straying too far from its roots, offering fans a must-play experience and for everyone else, a JRPG worth jumping into.

File Under: Atlus, Nintendo Switch, Sega, Shin Megami Tensei
A retail version of the game reviewed was provided by the publisher. You can read more about CGMagazine reivew policies here. 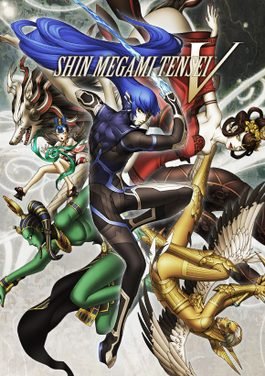