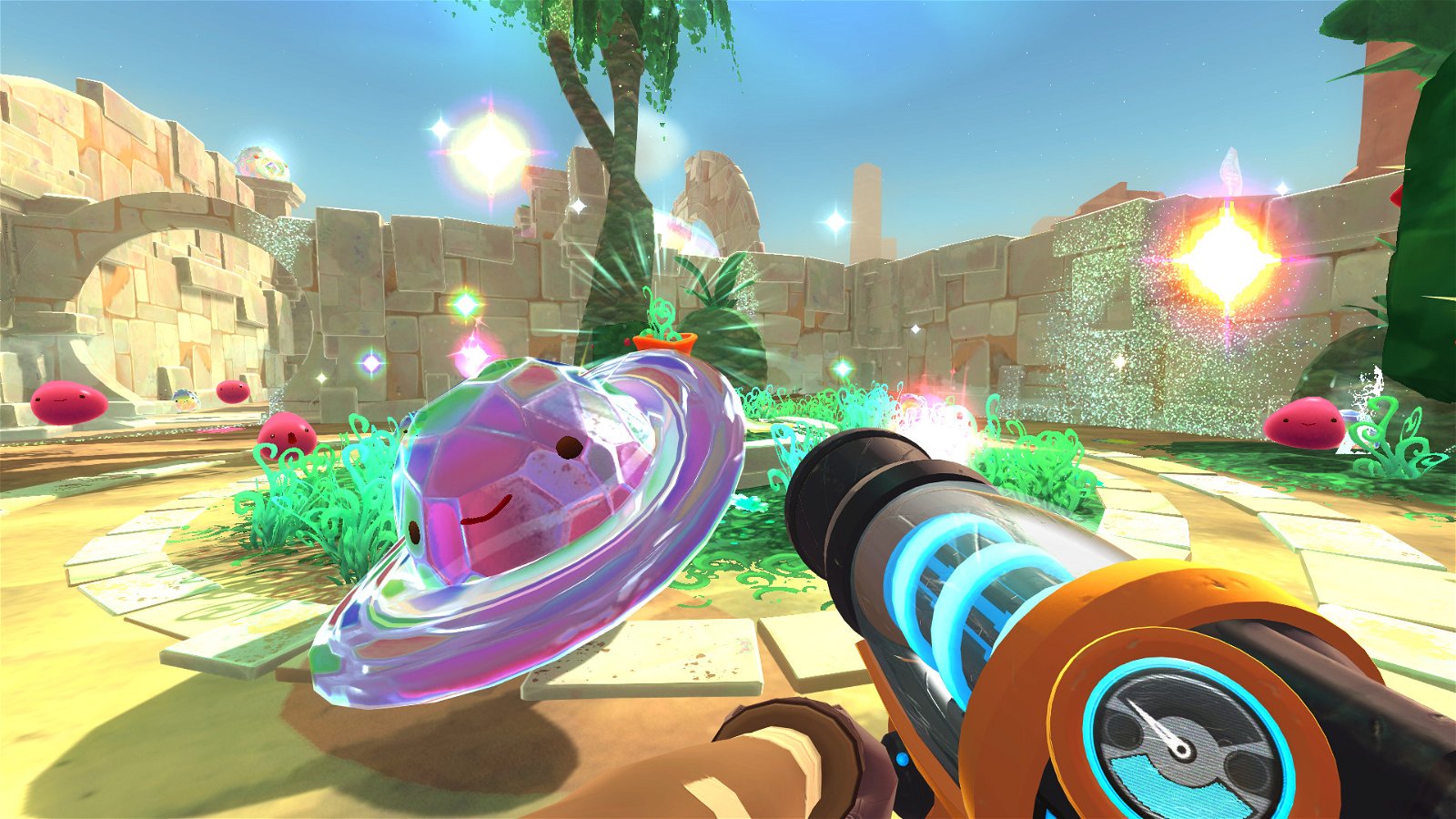 Being colourful and/or cute is so in this year. I mean, so far we have had Yonder, Splatoon 2, and now Slime Rancher, which very well may be the heckin’ cutest game of them all.

In Slime Rancher you play as Beatrix LeBeau—a beautiful person of colour with green hair and a button nose worthy of booping—who has left behind her life to work on a distant ranch where she collects and breeds slimes to harvest their poops to exchange for cash—yes, really. But don’t worry, there isn’t a single thing about this game that is gross, profane, or even remotely violent; which is a refreshing change for a game played in first-person.

As Beatrix, you’ll spend a majority of your time exploring a massive ranch to look for new areas and breeds of slime, as well as fruits, vegetables, and doors that can only be unlocked via keys given to you by giant slimes that take a good deal of searching to find. Slimes and the items you find throughout Slime Rancher can be sucked up and carried in your vacuum cleaner-like device, thus allowing easy transportation back to your home on the ranch. Once there you’ll be able to set up pens for your adorable slimes, plant gardens, and trade poos for cash in the “plort market” which has varying prices just like the real stock market.

Money can be used to upgrade and expand your ranch, abilities, and pens as well as unlock a science centre which grants you, even more, resource types and abilities. Some upgrades include a jetpack, a larger stamina meter—which is used for the Quake-like sprinting as well as jetpacking—and taller pens which allow for more slimes. The science area is especially useful as it grants you the ability to open treasure orbs hidden throughout the world, and eventually the ability to craft two-way portals which come in quite handy late in the game as otherwise, you’ll be going on lengthy journeys to and fro. Unfortunately for me, the science centre was the last thing I purchased near the end of the game; had I known it granted custom teleports I’d have bought it sooner and saved myself some trekking. That said, I never was bothered by the backtracking, and there are plenty of portals back to the ranch to find throughout the game that exist in the wild.

Surprisingly, there is actually a pretty charming story told throughout the game via notes left behind by the retired previous owner of the ranch specifically for Beatrix as well as letters from a person Beatrix knows from back home. The notes from the previous farmer add cute little insights into how a person nearing the end of their career or life may think, as well as reflecting on their memories on the farm. Reading what I assumed was an old lady reminiscing about her life was charming, heartwarming, and even a bit sad. Beatrix’s loved one back home also tells a story of what it is like to be far away from someone you care about and is a deeply touching story, one that Slime Rancher‘s designer Nick Popovich told me was deeply personal and loosely based on his experiences.

Slime Rancher is a cute and mostly simple game as there is no real combat, no extreme crafting, and no survival elements. But don’t let the simplicity frighten you away. Personally, I loved being able to casually explore at my own pace, checking every nook and cranny for some undiscovered species of blob to take back to my ranch, but some players may hope for a bit more. If you find repetitive games with only a few small goals and no real difficulty, you may very well find Slime Rancher a bit boring, but you’d probably find every farming game equally as boring—if not more so.

The only thing close to negative criticism I have for Slime Rancher is that many of the unlockable items and letters from home are gated behind time played. One second in real life equates to one minute in-game, and when I finished I was on my 30th day. That said, I never found myself waiting around for time to pass as there was always something to keep me busy, be it feeding my slimes (which is purely to get their plorts, they won’t die like your Tamagotchis did when you were a kid and your mom was supposed to take care of it while you were at school. I’ll never forgive you, Mom!), upgrading pens, or continuing to explore. I’d imagine if someone wanted to they could repeatedly rest at the house on the ranch to speed up time and thus unlocks, but I feel like that would defeat the purpose and the final letter is locked behind finding the final note from the previous rancher anyways.

Reaching the end credit sequence took me around 15 hours, though I feel like it could have been done faster had I had the ability to craft portals earlier. There is some post-game content and the ability to continue ranching and exploring as you see fit (for those worried about playtime), plus the developers have more content planned for patches coming in the future.

I absolutely loved Slime Rancher, from the colourful start to the bittersweet ending that literally had me sobbing—something that is quite hard for video games to achieve. While a bit repetitive, I think that is excusable as it comes with the nature of the farming genre, even if this is one of the most casual farming games out there. I’ve never played a cuter, more pure game in my entire life, so I have no qualms awarding Slime Rancher a well deserved perfect score.

In a land filled with adorable slimes one green-haired girl becomes a rancher and collects their poops to make a living. Slime Rancher is one of the cutest games out there.