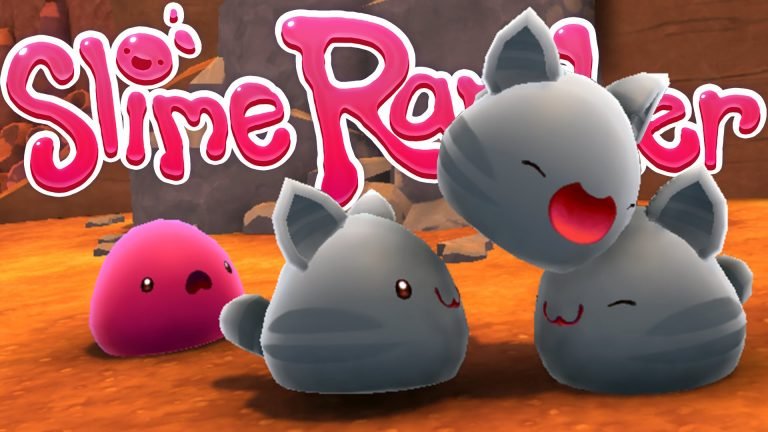 I’m going to get this out of the way right off the bat: Slime Rancher is the most adorable game I’ve ever played. It’s like Pikmin on cuteness steroids – except you don’t really do anything with the slimes you collect.

Your job as a slime rancher is to feed, protect, and profit off of the many species of slimes you encounter during exploration. You are armed with a special Vacpack tool that allows you to vacuum the many slimes and resources you find around the ranch – perfect for not getting your hands all slimy.

Monomi Park has done a fantastic job in creating a relaxing, heart-warming, poop-scooping experience. Everything about the game is therapeutic. You take on the role of a slime rancher, thousands of miles away from home trying to make big bucks raising different varieties of slime.

Slime Rancher has plenty of slime species, each with their own needs and behaviours. For example, Tabby Slimes are squishy feline slimes that feast solely on meat. One thing I noticed about the bouncy little predators is if I placed my Tabby Slime enclosure next to my Hen Hen (Chicken) coop, the Tabby Slimes would gravitate towards the fence closest to the Hen Hens and drool. Rock Slimes, on the other hand, have a veggie-centric diet, and roll into you when they’re upset.

Each slime has a unique type of poop – called a plort – and each type of plort sells for a general, yet ever-changing amount of money on the market.

The in-game stock market is a great feature. Plorts do not have a set value; Instead, they fluctuate based on how many of each type you have sold. At the beginning of my life as a rancher, I would exclusively sell pink plorts, which are found in abundance. Pink slimes are found everywhere, and eat everything… so they pretty much poop infinitely. After a day or two of selling the pink plorts by the figurative boatload, the value of that particular plort crashed, forcing me to find alternative types to sell. This is a fun way of encouraging players to have an eclectic slime collection.

There’s a lot to do around your little village of slimes, too. I had chicken coops set up near my carnivorous slimes, and I had a carrot plantation next to my vegan slimes – both of which are upgradable to more efficiently produce slime-food to satisfy the beasts. Of course, if left unguarded or un-upgraded, wild slimes might just break into your farming patch or chicken coop and devour whole fields of crops in an instant. It was as adorable as it was frustrating to watch a group of Tabby Slimes break into my chicken coop and gorge themselves on the entirety of my livestock. The best part is, the vegan Rock Slimes gave them dirty looks while they gave into their primal, carnivorous desires. (Actually, Rock Slimes kind of give everyone dirty looks all the time. They’re probably just better than us.)

Slimes can be interbred as well, which creates a “largo” slime. Basically, if any ordinary slime eats another slime’s plort, it will take on that second type, as well as any characteristics and dietary needs. That means those pompous, vegan Rock Slimes might just sit down for a chicken dinner if they’ve eaten the plort of a carnivorous slime such as a Tabby or Boom Slime.

Slime Rancher makes it easy to tell which slimes need what food, because simply looking at any slime will reveal its food preference. There are benefits of creating dual-type largo slimes, such as producing two plorts per feeding – one from each of its types. However, the morbidly obese largo slimes are unable to be vacuumed by the Vacpack, and largos run the risk of unleashing something devastating upon your ranch.

Interbreeding slimes isn’t all fun and games. Trust me. Bad things can happen when you mix and match your slimes. If a dual-type slime happens to eat a plort of a third type, kiss everything you’ve ever loved goodbye, because that gluttonous slime is about to turn into a cannibalistic, oily ball of depression called Tarr. These ravenous creatures eat other slimes, rot your crops, and rapidly reproduce. In a matter of minutes, an unresolved Tarr outbreak could wipe out your entire population of happy-go-lucky slimes. It’s heartbreaking to watch, and adds a sense of panic once the unsettling Tarr music sets in.

Slime Rancher is in Early Access, and it’s not hiding the fact. Several areas throughout the map are boarded off with little slime-worker construction signs indicating the areas will be released further in development. Although, some sneaky ranchers have used their upgraded jetpacks to access the currently empty areas.

That’s another thing I love about Slime Rancher. There are no boundaries. There are massive cliffs and areas separated by sea, but if you can effectively use your jetpack, you can pretty much access anything – even the areas that have been boarded off by developers. A huge part of Slime Rancher is exploration, and there really isn’t any restriction on how or where you do so.

At its current phase of development, Slime Rancher has a lot to offer. There is a lot to do and collect as you enjoy the calm, relaxing life of a Slime Rancher. However, the game has a lot it can improve before its full release. For example, the Vacpack can only hold four stacks of items at a time, and it’s a bit restrictive to only carry four unique items at a time. Almost all of the other gear is upgradable, including the quantity of each item you carry, and this would certainly be a worthy addition. There is a lot to do in Slime Rancher, but once you’ve experienced the content, there isn’t much to do. After upgrading your slime corrals and unlocking the extra areas, money eventually becomes irrelevant. The game could certainly benefit from a sense of progression, possibly through ranch upgrades and expansions or late-game content.