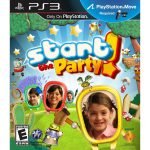 Because both Microsoft and Sony want to have familiar offerings in their stable of motion-control games, it was inevitable that party games like Ubisoft’s Raving Rabbids or Nintendo’s own WarioWare series would make their way onto the new motion systems. Start The Party is the first of what will undoubtedly be many such re-treads into this territory, and it is a competent debut at best.

Lacking any kind of story or comprehensive structure, Start The Party tasks up to four players with having their photo taken by the PS Eye camera, speaking your name in a record mode, and then engaging in a series of mini-games based on “augmented reality” concepts where the Move controller becomes different tools for different tasks, such as a spear for piercing porcupine fish, or a fan to create winds to re-direct parachuting figurines. The accuracy of the Move system is displayed to good effect here, though it’s not as consistent as it is with other games like Sports Champions.

Ultimately, Start The Party suffers from a serious case of “been there, done that.” It’s a party game, and you’ve likely played a multitude of them already on the Wii, and while the controls generally work, the actual structure of the game is barebones. In group play, you have the choice of Party Mode or Party Mix, the only differences being in one compete against others with different score mechanics randomly assigned, like “Robber Round” where the winner steals stars (points) from other players, and “Winner Takes All Round” where only the winner gets any stars.

“Start The Party doesn’t. It checks off the boxes for the most basic requirements of a party game but fails to go beyond that.”

Party Mix is simply a freeplay mode where players can choose their own mini-games and compete at a leisurely pace. There’s also a single-player mode, with a “Survival” mode that simply puts the player in random mini-games at a breakneck pace, a la Warioware and a similar freeplay mode. Compare this with the more comprehensive party games of yesteryear, such as Mario Party on the original N64 with its distinctive combination of mini-games in a board game milieu, and it’s obvious that while Start The Party has the basic concept down, it lacks the same polish.

One puzzling omission in the game is the inability to play all the mini-games. While some games like “Picture This” the drawing game, or “Poppin” the fish-bursting game are selectable in the freeplay modes, others like old fashioned “Whack-a-mole” only appear randomly in the survival-style rounds. That’s not to say that Start The Party can’t be fun. It can. And it’s not a broken game by any means. But there is a difference between functional and engaging, and while Start The Party can show off the Move technology to an impressive and occasionally enjoyable degree, a lot of corners were cut in structuring the gameplay into something compelling or more meaningful.

Games such as Guitar Hero have only one mechanic, but many modes and possibilities for play are explored within the confines of playing a plastic guitar. In the same way, many existing party games show a depth and long-lasting appeal by adding a broader structure or even story to the proceedings that give players something beyond merely moving from one mini-game to the next. Start The Party doesn’t.

For a PS3 game review, Star The Party checks off the boxes for the most basic requirements of a party game but fails to go beyond that. If you’re desperate for a party game to play with the family on your new Move system, this will suffice, but odds are good that a much better game—likely from Ubisoft, since they’re aggressively going after the family market—will surface eventually.

It checks off the boxes for the most basic requirements of a party game, but fails to go beyond that.
REVIEW SCORE
6
File Under: PlayStation