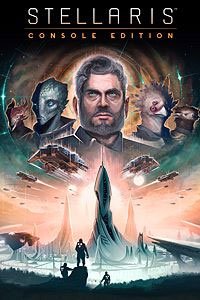 A grand strategy game on consoles is difficult to make for a number of reasons, least of all the massive change in control scheme required for the switch. A keyboard and mouse setup is easy to build a user interface around, while a gamepad is much more limiting by comparison. But in porting Stellaris to the PlayStation 4 and Xbox One, Paradox and Tantalus Media have done what I previously thought was impossible: Make a grand strategy game that controls just as well on consoles as it does on PC. Stellaris: Console Edition may not reach the highs of the original PC release, but it still conveys much of what made Paradox’s strategic space opera so engaging in the first place.

For newcomers, Stellaris revolves around the creation and management of an interstellar empire shortly after it discovered faster-than-light travel. Though there are a number of pre-made civilizations to choose from, the real joy comes from using the surprisingly robust and customizable empire creator, where you can choose everything from the appearance of your empire’s starting species, to the tenets and ethics that will determine how that empire interacts with the cosmos. The variety of the options can yield some oddly compelling and strangely humorous results, such as my empire composed of penguin-like aliens who are both really strong, long-lived, and also believe that authoritarianism and slavery are perfectly acceptable forms of government and policies to live by.

From there, you set out to explore a randomized galaxy, using exploration vessels, construction ships, and military fleets to expand and espouse your chosen goals. Though there are victory conditions, such as conquering every independent empire or owning a set number of planets, in practice the goals of your empire are whatever you want them to be. My penguin-slavers, if one couldn’t tell, were definitely bent towards militarism, and practiced gunboat diplomacy at every opportunity. But even outside of military force, Stellaris bends to your will pretty easily, and peaceful empires have just as many routes to their goals as those with numerous fleets at their disposal.

The systems themselves interact with each other in, frequently, fun and surprising ways. Factions can develop within your empire over time that advocate for specific ideologies, such as spiritualist faction that believes in purity in the body and the sanctity of organic life. That same faction will greatly dislike it if you research artificial intelligence technology, and over time could be cause enough to rebel. But developing sentient robots itself runs the risk of an AI uprising, which could be greatly magnified in a late game crisis. These challenges and relationships are what make Stellaris so engrossing, and it’s all retained in the Console Edition.

That’s because the controls and user interface are very well designed, particularly for a strategy game on consoles. Using the d-pad, you navigate hotbars on the left and right sides of the screen, with each icon opening up to a themed set of menus. Resources are displayed along the top of the screen, with notifications about diplomatic inquiries and combat summaries coming in like a ticker along the bottom. The menus are complex, and it’ll take some time to get used to the onslaught of information. But between navigating around the map and using the menus, it’s a lot easier to pick up and play than one might expect.

Let’s make this abundantly clear: Making a control scheme for Stellaris on consoles that is not only merely serviceable, but actually easy-to-use and intuitive, is an accomplishment in and of itself. Paradox and Tantalus have taken a genre that is known for complexity, with menus nested within menus many times over, and made it feel natural. While a keyboard and mouse setup would still be the preferred method for controlling Stellaris, the fact that I can use a gamepad and command my empire with a speed and ease that even slightly approaches that system is noteworthy, and should be celebrated as such.

That does not mean that the Console Edition can stand shoulder to shoulder with the PC version. Far from it in fact. For one, Paradox began development on the Console Edition back when Stellaris was on patch 1.7, and the launch version closely resembles that, with some minor tweaks. Stellaris has dramatically changed since then, primarily for the better, and some of those changes will hopefully make their way over to the Console Edition over the ensuing months. This includes megastructures, the massive Dyson Spheres and ringworlds that can be built in the late game. They come with the Utopia expansion, which will release on consoles sometime in the future, but megastructures are unfortunately present in the base game as an option in the construction ships, even though you cannot build them. It’s an unfortunate inclusion, but one that will be fixed in due time.

Yet outside of the version differences, which are perfectly understandable considering the time between development and launch, the Console Edition has a major issue when it comes to pacing. Though you can select the speed at which time moves, even the fastest setting feels remarkably slow. This isn’t as big of a deal in the early game, where you are rapidly expanding to new star systems, or in the late game, where you are maneuvering fleets and troops to contain any of a number of crises’. But in the mid-game, once there is little room to expand and you’re waiting to upgrade technologies, months can go by where all you can do is stare at the timer as it chugs along. It’s boring, as both peaceful and militaristic empires will have long stretches of downtime where nothing happens. And if you happen to get into a fleet engagement past this point, expect plenty of dropped frames and sluggish performance all around, as the game struggles to keep up with the massive amount of ships and projectiles firing at one another. Outside of those engagements, the Console Edition runs smoothly, with few bugs and technical issues marring most of the proceedings.

Which is fortunate, because I find myself being drawn back to the Console Edition every night. The best grand strategy games often make me want to keep playing one more turn, just to see the outcome of my decisions and what the world has to throw at me. With Stellaris: Console Edition, that feeling comes often, only now, it’s coming from the comfort of my couch. The changes made to accomodate gamepads and consoles work remarkably well, even if some much needed changes are still waiting in the wings. Does it come close to the level of satisfaction brought by playing Stellaris on a PC? Not yet. Is it still a remarkable strategy game that is worth your time on consoles? Most definitely.

Stellaris: Console Edition has a long way to go to catch up to the PC version, but its intuitive controls make it a compelling strategy game on consoles nonetheless
REVIEW SCORE
7.5
File Under: