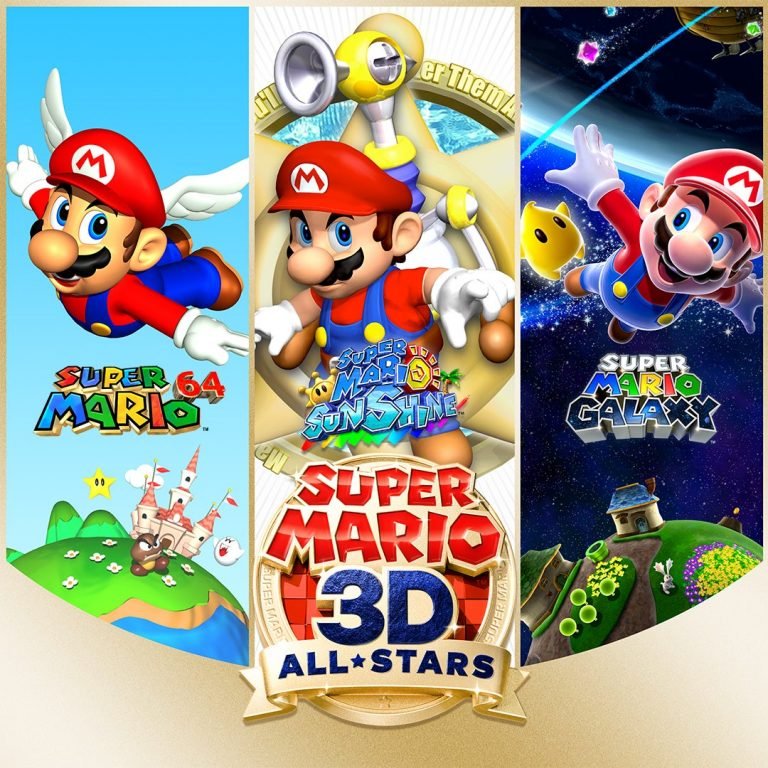 Super Mario Odyssey wasn’t a game concerned with pushing its players too much on their initial runs at the game. Super Mario Odyssey seemed to focus more on exploration and light fun, only really finding its teeth once you complete the main game. I found it a little unsatisfying, missing the days when the games were more demanding of the player. Thankfully, I now have Super Mario 3D All-Stars to brutalize me (at varying levels).

The collection brings together Super Mario 64, Super Mario Sunshine, and Super Mario Galaxy, some of the most staggeringly good platformers ever made. Each somewhat represents a tier of challenge, depending on what you’re looking for from these difficult, yet highly-compelling games. As hard as they get, I just can’t put them down.

Each game has a few quirks that make it a unique experience, offering a great deal of variety even though they are three 3D platformers. Super Mario 64 was the heroic plumber’s first foray into the third dimension, and may seem basic by today’s standards; but it offers many precise platforming segments, and many creative reuses for its areas, providing a satisfying challenge that is showing its age just a little bit (it did come out over twenty years ago, after all). Super Mario Sunshine builds on that foundation, adding a water pump that allows you to hover for short distances and clean messes in the environment (which is more fun and exciting than it sounds). Super Mario Galaxy takes you on a gravity-bending journey through planets in space, constantly asking you to tilt your head as you walk upside-down under an errant meteor.

Controls feel precise in each title in Super Mario 3D All-Stars, but may take some getting used to. This comes from Mario building up momentum as he moves; running and jumping with a little degree of realism. He can’t just stop dead if you’ve got him running full tilt, so much of the game involves knowing the feel of how you move. You need to have a good idea on how much room you need to stop as you hop and hurl yourself around. This requires the player to gauge distances well, and while this is hard at first in all of these games, you’ll likely start to get the hang of it after an hour or two.

This is when these games really start to come together. When you’re eyeballing distances rather than guessing, and gauging where you shadow is; you start to lean more into your role as Mario—enjoying that fantastic sense of movement and momentum that Nintendo has captured with the character. Part of the series’ enduring joy is the simple fun to be found in moving Mario around and making him do wacky stunts. These might be tricky at first, but after getting used to them, it gives the games this wonderful rush in its parkour-like movements.

Speaking of control, I’m impressed that Nintendo managed to get control schemes from the N64, Gamecube, and Wii to all work with the Switch’s Joy Cons, both docked and in handheld. I realize that there’s enough buttons that it wouldn’t be much of a problem, but part of the feel of the games included in Super Mario 3D All-Stars is tied to the way those controllers were set up. Hitting the Z button on the back of the N64 controller to do a long jump is ingrained in my mind, but this new setup soon became second nature. Getting all of these schemes to feel comfortable within the parameters of the Joy Cons is impressive to me, and goes a long way to preserving how enjoyable these games are.

I also enjoyed the various challenge levels among the titles. Galaxy’s space travel adventures make for the easiest in the group—although it can still get pretty hard if you want to do everything. Super Mario 64 is a decent challenge—especially given the wonky camera created during the early days of 3D gaming; filled with treacherous, highly creative courses. The hardest, and yet the one I can never put down, is Super Mario Sunshine, which seems like it should be easiest given the hover ability you have. This just seemed to give Nintendo the green light to design some truly ruthless courses and demand perfect precision (and don’t get me started on the Acapella courses). That challenge just feels so good to overcome, though, especially in the bright, colourful world the game takes place in.

Visually, these are some stunning games that look super sharp in HD. Super Mario 3D All-Stars really captures the gorgeous beaches of Super Mario Sunshine and the bizarre, varied planets of Super Mario Galaxy. These look great both in handheld or on the TV, although I have a lousy eye for frame rates unless they’re abysmal; making these beautiful games pop like never before. Super Mario 64 still looks a but muddy, but work was clearly done to clean up some aspects. It’s not as visually impressive as the others, but as a cleaned-up artifact of its time, it’s still quite nice.

All that said, this collection feels a bit lean compared to many other collections that have come out. With the Mega Man X Legacy Collection being filled with art and informative tidbits, it’s hard not to feel some disappointment here. Even Konami’s: Castlevania Anniversary Collection contained a lot more information than Super Mario 3D All-Stars does. It does contain the soundtracks, but I just can’t see myself booting up the game to listen to them. These are huge pieces of Mario history, and I can’t help but feel saddened that Nintendo didn’t show us some interesting elements of that history.

Still, I just can’t stop playing Super Mario 3D All-Stars. These games just grab me when I play them, refusing to let go until I’ve done everything and gotten everything. The joy of movement, the sharp controls, and the endlessly imaginative worlds keep bringing me back, even after all these years.

I just can’t stop playing Super Mario 3D All-Stars. The joy of movement, the sharp controls, and the endlessly imaginative worlds keep bringing me back, even after all these years.
REVIEW SCORE
9
File Under: Mario, Nintendo, Switch