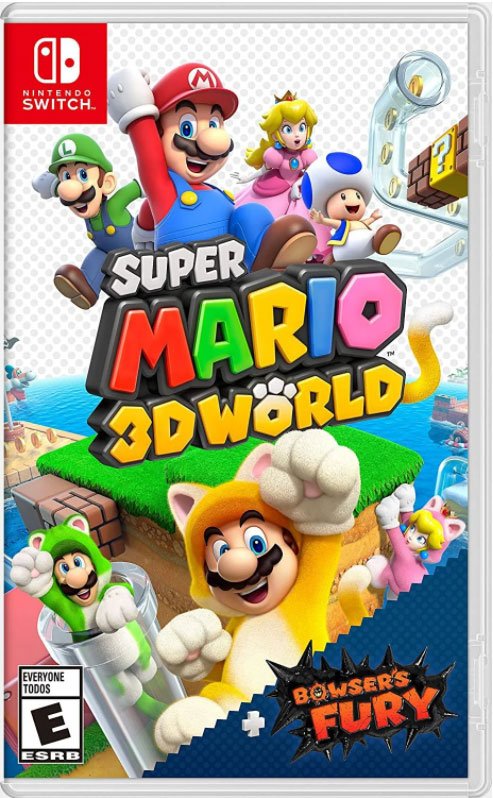 Ah the Wii U, gone so soon before it’s time. Like I mentioned in my Donkey Kong Country: Tropical Freeze review, it is genuinely upsetting to look back at the Wii U, because it genuinely was a unique system that laid so much of the groundwork for it’s more successful successor: the Nintendo Switch.

As such, it’s superb library of first-party games were never fully experienced by the audience they should have…until now! Following in the footsteps of Bayonetta 2, Mario Kart 8 Deluxe, and Pikmin 3—to name a few—Super Mario 3D World now finds itself on the Nintendo Switch, and even after seven years, it’s still a conflicting experience.

I was never fully sold on Super Mario 3D World when it first released on the Wii U back in 2013. While I thoroughly enjoyed Super Mario 3D Land on the 3DS, so much of what made it work was specific to the smaller, more contained experience that came with the portable console; and I questioned how much they would work when transitioned to a larger, sit-down experience.

When I saw the announcement for Super Mario 3D World + Bowser’s Fury on the Switch, I thought, “Well the Switch IS better suited to handheld than its predecessor, maybe this could work!” But even playing it a second time, on a console better suited to its ideas, I just can’t really get into it.

While CGM’s Phil Brown did think pretty highly of Super Mario 3D World when it came out on the Wii U, honestly, I’ve always felt that it  was the most forgettable in the Super Mario franchise. That’s not to say it’s a terrible game, because it really isn’t. But I’ve always felt it lacks that wow-factor that so many of the other Mario games have. While it’s the inclusion of Luigi, Peach and Toad all being playable and featuring the same abilities that they did in Super Mario 2, is an excellent callback to the NES classic, it’s second “innovation”: the Cat Suit power-up, always felt like more like  a minor expansion of the Tanooki suit than a genuine power-up in it’s own right.

But I think my biggest issue with Super Mario 3D World is just how wonky the controls feel. That isn’t to say they’re completely bad, but after playing Super Mario Odyssey on the Switch with it’s tight-as-a-drum controls, going back to Super Mario 3D World feels like a genuine step backwards Movement feels slippery, and sometimes imprecise, particularly when running; and jumping feels incredibly floaty and unpredictable. What’s more is the game’s run mechanic can alter the momentum of jumps, once you “boost” into full speed, further adding to the unpredictable positioning of jumps.

These issues are made worse by the game’s limited camera control in the semi-isometric, 2.5D levels, which never really give you a great sense of your position in 3D space—something that the 3DS’ trademark feature went a long way to cover for. This usually results in several misplaced jumps that can range from frustrating—like when trying to hit blocks; or down-right deadly. It’s really hard to imagine that the platforming in a Mario game could be both frustrating and underwhelming, but every time I play Super Mario 3D World, those are the feelings I’m left with.

Furthermore, Super Mario 3D World feels to me like one of the more toothless games in the Mario franchise. If you can get past the finicky controls, so many of the levels in Super Mario 3D World feel lacking in any real challenge, and you can burn through them pretty quickly; although I’m willing to look past this a it definitely suits a console like the Switch, were you can easily clear a level or two during a bus ride or lunch break. However, I maintain that the Bowser battles in 3D World are some of the most pathetic ones in the franchise; as he stands on a slowly moving car, gently rolling soccer-ball bombs for you to kick into him. Portability or not, these are a joke.

Being a Switch re-release, Super Mario 3D World does include one major addition: the inclusion of the Bowser’s Fury game mode. In this mode, Mario finds himself in a strange, cat-themed land, that has been covered with black paint. Upon his arrival, he finds Bowser Jr, who explains to him that Bowser has been covered with the paint and transformed to a gargantuan version of himself, devoid of any control. Together, the two must work to collect Cat Shines that not only power various lighthouses that can clear the paint from the land, but can also release the power of the Giga-Bell, allowing Mario to transform into a giant, Super Saiyan Cat-Mario, giving him the power to defeat Bowser.

However, mixing up the gameplay somewhat is Fury Bowser himself, who sits in the middle of the world and slowly begins to stir as you run around collecting Cat Shines. Once he awakens, he terrorizes the map, sending fireballs and giant spikes that can act as platforms onto the board. The first few times this happens, it can be pretty exhilarating, however it starts to lose some of its edge after a while, and Fury Bowser becomes more of a nuisance than a genuine threat. This is compounded by the fact that if you die or enter a bonus stage during Fury Bowser’s rampage, it’ll end the sequence altogether and you can continue collecting Cat Shines.

Furthermore, the aforementioned control issues find their way into Bowser’s Fury, and create a bit of a disparity—it looks like you’re playing Super Mario Odyssey, but it feels like you’re playing Super Mario 3D World and the two styles don’t really gel. The more nuanced, fine-tuned controls of Odyssey are sorely missed, and the lack of a small thing like being able to grab ledges can make some of the more open-form platforming a bit frustrating.

Thankfully, the game makes up for it with the Fury Bowser Boss Battles, which are actually pretty cool. When you first become the Super Saiyan Cat Mario and the intense, operatic music begins to swell, you know this fight is going to be epic. Unlike the main game, Bowser’s Fury does a great job of making Bowser a challenge during these battles. There’s only one real opening to deal significant damage against him, and Bowser mixes up his attacks with every fight, adding a lot of dynamism to each battle.

If I have a problem with the Fury Bowser Boss Battles, it’s how Mario still plays by old-school rules, and one hit will knock him out of the Cat Suit, and remove all grandeur from the fight as he lumbers around like a gargantuan goober. While you can still attack Fury Bowser by jumping on him at the opportune moment, if you wish to return to your Super Saiyan form, you’ll have to wait for the various Giga Bells dotted around the map to become active again.

Despite some good moments, Bowser’s Fury just feels like a strange collection of ideas that never really coalesce—like it wants to be a Course Clear Mario, trapped in the body of a Sandbox Exploration Mario. I can’t help but feel like maybe if Bowser’s Fury was built like Super Mario 3D World and had a collection of actual levels—maybe some that were normal, and some where Fury Bowser was in the background the whole time creating obstacles and threats, which culminated in various “3D” Fury Bowser boss battles, than it might have felt like a more put together experience.

Also, I can’t help but feel that the inclusion of Bowser Jr. was a bit of a missed opportunity. He’s a fine little addition, and he’ll help you out here and there by attacking enemies or grabbing coins, but you can only really send him to key points with the touch-screen, or with motion controls if you’re using a controller. Furthermore, controlling Bowser Jr. in two-player is a bit disappointing, since controlling him can be a bit weird, and the camera always stays focused on Mario so it’s easy to lose sight of where you are if you lag behind.

I feel like this review is coming off extremely negative, and I honestly wish it wasn’t, because I honestly don’t think Super Mario 3D World or Bowser’s Fury are bad games. They both look beautiful—something I thought about the Wii U version as well—with bright, colourful levels that render beautifully in HD. Furthermore, Super Mario 3D World may have the best soundtrack of any Mario game and the songs they added in Bowser’s Fury are equally as excellent.

I don’t think Super Mario 3D World + Bowser’s Fury annoys me as much as it did on the Wii U, since the Switch already has the best Mario ever made on it; and I do think there is fun to be had with these games, even though I find them to be fairly frustrating. I would still recommend them if you enjoyed the originals, or maybe wanted to play them with younger gamers. Even though I might not go back to it very often, I don’t regret the time spent with it.

While Super Mario 3D World + Bowser’s Fury still doesn’t exactly do it for me, there’s enough in here to please most Mario fans, and maybe some who missed it on the Wii U.
REVIEW SCORE
7
File Under: Mario, Nintendo Switch