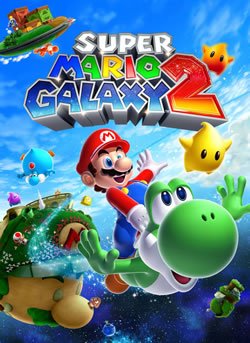 In many ways, reviewing a new Mario game is a superfluous exercise. Everybody already knows what to expect. The princess has been kidnapped, some stars have gone missing, and Mario is the only individual competent enough to restore the status quo. Yet no matter how familiar we are with the material, constant gameplay innovation has allowed the franchise to remain original for decade Super Mario Galaxy 2 is excellent. It draws its inspiration from the foundational principles of gaming, operating as an unapologetic throwback to a simpler era that prioritized gameplay over accessorie There’s no choose-your-own-adventure morality. There’s no player choice beyond ‘Yes’ or ‘That’s right.’ There’s just 120 stars worth of new linear levels that are an absolute blast to play through, making Mario Galaxy 2 a video game in the purest sense of the term.

Mario Galaxy 2 is a more confident game than its predecessor. Mario Galaxy was good, but it introduced a lot of new gameplay elements and there were times that it felt as if the developers were still working out some of the kink Mario Galaxy 2 has no such concerns, as all of the concepts introduced in the first game have been polished to perfection.

The sure-handed creative philosophy is most evident in the superb level design. Mario Galaxy wallowed in its gravity physics to the point that circumnavigating planets became a distracting crutch during some of the stage With the sequel, the developers have liberated themselves from the necessity of showing off a new engine. The focus is solely on the gameplay, meaning that each galaxy represents the culmination of a clever idea that remains worthwhile regardless of the number of dimension Many of the stages are little more than flat jumping endeavors, while some revert seamlessly to a 2-D side-scrolling format.

The simplified structure may seem like a step backwards for the franchise, but it actually serves to expand the developers’ bag of trick Mario Galaxy 2 is positively packed with possibilitie From rhythm-based beat blocks and ice-skating to pull stars and slides, the potential of every gimmick has been fully realized and you’ll appreciate the care with which it’s all been implemented. The tools are used so effectively that even old ideas feel new, as with the 2-D upside-down gravity mazes that stand out as some of the most satisfying levels in the game.

Meanwhile, Yoshi’s long-awaited return is one of many new power-ups that foster further exploration. The green dinosaur still gobbles up everything in sight, but now he does so with added gusto and purpose, as his curious fruit diet imbues him with a variety of fun abilitie My personal favorite is the Jalapeno-infused Dash Pepper, which is so spicy that it shoots steam out of Yoshi’s ears and sends him into a turbo-boosted, red-faced frenzy that allows him to scale vertical walls and run across water. Other treats include a blimp fruit that turns Yoshi into a blue helium balloon and a bulb berry that turns him into a glowing yellow florescent light.

Mario is also no stranger to strange snacks, so there are several new mushrooms and plants to chow down on. Cloud Mario, Drill Mario, and Rock Mario join Bee Mario, Boo Mario, and Rainbow Mario in the horticultural arsenal, with each outfit serving as the inspiration for a slew of new galaxie Cloud Mario is put to particularly good use. The ability to create three – and only three – cloud ladder rungs leads to some interesting stepping stone puzzles that reward judicious resource management as much as pure platforming skill.

Prankster comets are back for veterans looking for a tougher challenge. This time around, the more difficult stars can only be unlocked after finding the Comet Medal on each world, giving players added incentive to explore every environment. The medals are relatively easy to find, but they’ll be located in hard to reach areas and you’ll miss them if you’re rushing through towards the end. The medals separate the casual players from the hardcore fans, broadening the appeal for gamers of all experience level

The difficulty curve is on par with previous Mario game There are plenty of stars that will require multiple attempts, although the game is seldom frustrating. You’ll always feel as if success is one run away, plunging right back into the Action as soon as your life counter ticks down. The landscapes are littered with 1-up mushrooms, so Game Over screens are blissfully rare. Even so, many gamers will fall short of the 120-star plateau. Mario Galaxy 2 is highly accessible, but don’t go in expecting a cakewalk.

Beyond Yoshi, several other Mario trademarks return to color the game with a whimsical retro aesthetic. A Mario 3-style world map replaces the over world hub utilized for other 3-D Mario adventure Like Super Mario World, the map comes complete with a secret area that can only be unlocked after beating Bowser. Checkpoint flags track your progression towards each star, item dice reintroduce gambling mini-games, and the soundtrack is largely a remix of Mario’s greatest hit There’s even a dedicated Throwback Galaxy, sending players to Whomp’s Fortress for a rematch with the concrete block from Super Mario 64. The recycled material has been tweaked just enough to keep it fresh, demonstrating sincere nostalgia while remaining wholly inventive.

It may be boring to heap praise on a game, but Mario Galaxy 2 really is that good. I could have done without the aggravating slinky mechanics of Spring Mario, but that’s more of a personal gripe than a significant design flaw. The game hits every note with such amazing grace that you’ll fall in love with Mario all over again. Super Mario Galaxy 2 is rainbows, sunshine, smiles and happiness, with a warm heart and adorable humor that will soften the most cynical soul. I hope Mario never change He’s just as magical as ever, and you couldn’t ask for a finer demonstration from the grandfather of modern gaming.

Super Mario Galaxy 2 is rainbows, sunshine, smiles and happiness, with a warm heart and adorable humor that will soften the most cynical soul.
REVIEW SCORE
10
File Under: Mario, Nintendo, Platformer, Wii