A Remixed and Reborn Classic 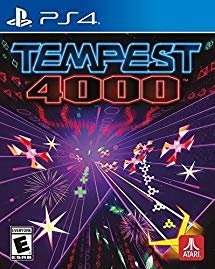 Due to being born in the early 90s, I, unfortunately, was a little too young to even know what an Atari Jaguar was, let alone play its saving grace of a title, Tempest 2000.  A title that in itself was a direct follow up to Atari’s 1981 arcade game, simply titled Tempest.

Tempest 4000, a sequel developed by Llamsoft, the original team behind the Jaguar classic has come to modern platforms, almost 25 years after the release of Tempest 2000. As a fan of the shoot ’em up and rhythm genres, who never played any of the other Tempest titles, Tempest 4000 was an interesting experience, to say the least.

Tempest 4000, from what I could tell, doesn’t seem that much different from its predecessors, with the main objective tasking players with guiding their ship through unique grid-like tubes, in which the player basically rims the outer parameters, while making sure to clear out any enemies that make it too close.

Tempest 4000’s unique selling point is the way the player interacts with the stages and enemies, as mentioned prior, the player is essentially glued to a fixed portion of the grid or level layout and instead of being able to move in 3D space, the player instead has to circumnavigate the outermost parameters, while shooting inwards at targets that slowly encroach the Claw or ship.

This is easier said than done, especially when stage layouts are segmented or non-looping, meaning players will have to move from side to side, rather than holding the stick or directional buttons in one direction, something that is only possible during looped or enclosed spaces. The difficulty ramps up (pun intended) as players progress through the stages, not just due to the introduction of more targets but rather, objects such as explosive stars, flowers, stems and crates filled with enemies, all of which add to the already visually noisy and borderline, overwhelming game.

Tempest 4000 features neon-soaked vector-based graphics, very much reminiscent of the 80s and 90s, amped up to modern day standards that look especially striking on PlayStation 4 Pro, in which the title is presented in 4k (a nice touch, considering the very title of the game).

Of course, as is true for any good shoot-em-up, power-ups are something that augments and helps curb the difficulty and Tempest 4000 is no exception. Power-ups can be earned by collecting enough green crosses, which generally spawn in small rows, that need to be quickly flown through. collecting enough powerups will transform the standard peashooter into a much more adept, particle laser, that not only has a stronger punch but also a faster rate of fire, making it easier to get out of tight situations.

Other items include 1UPs, point multipliers, an AI-controlled droid that helps you clear enemies and finally, the ability to jump — jumping prevents players from earning points from kills, however, grants them the ability to briefly go backwards, escaping the clutches of the enemy.  Clearing a stage or segment (in a brilliant dispersion effect, that would make the likes of Thanos blush), puts players in a short bonus sequence, in which extra points can be earned by ensuring the ship or Claw is in the centre of several oncoming rings or hoops. This portion of the game is controlled via the Dualshock 4’s gyro, which for the most part, I found to be fairly accurate.

Completing a bonus section replenishes the Claw’s special attack, a screen-wiping bomb, known as the Superzapper, which basically acts as the players’ Get out of Jail free card.

By far, the music is the strongest aspect of Tempest 4000, featuring synth-heavy beats that perfectly goes with the strong visuals of the game, ultimately helping immerse players better during each session. From what I could tell, Tempest 4000 features both classic tracks from previous games, as well as brand new tunes that help balance things out.

Sadly, the bare bones nature of Tempest 4000 and the game modes included is the weakness that stuck with me the most as I worked through the game. Main modes of play, include a classic, pure and survival mode. Classic, let’s player start the game from the first level, whereas pure and survival allows players to pick a level and go from there, or simply survive as long as possible. In essence, none of the modes feel particularly different from one another, with the primary goal boiling down to endurance — ultimately, making the overall package feel a little flat, despite the core game having such a unique and creative approach in its design and gameplay execution.

Some nice additions, that would have been a welcome touch, would be things such as the ability to change up the graphics, as in the sprites themselves (akin to titles such as Pac-Man Championship Edition 2 ) and perhaps even,  a VR or 3D mode, which I find would truly help elevate a title such as this from simply being a true-to arcade feeling game to something that fully utilized the advantages of modern hardware, specifically the PSVR in regards to the PlayStation 4 iteration.

Tempest 4000 is a game meant for arcade purists looking for the next evolution of a classic 80s era shoot-em-up title. The core experience is a fun and frantic miasma of explosive colours, bullets and polygonal invaders, that thanks to a easy to learn but tough to master feel, will have players coming back for more, without the worry of running out of quarters.

As it stands, Tempest 4000 is a unique and challenging mashup between the rhythm game and shoot-em-up genre and worthy of the legendary Tempest title.

Tempest 4000 is a love letter to fans of the original and Tempest 2000 on the Atari Jaguar, for everyone else, the game is a fun but hard to master, arcade-style, synth-heavy romp.
REVIEW SCORE
8
File Under: Atari