Delivering A Message Of Greatness 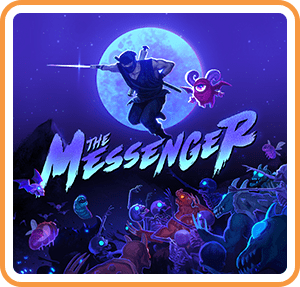 The Messenger is, above all else, comforting. Whether you’re traversing a room riddled with traps, listening to the Shopkeeper spin a new yarn, or charging forward to give that one boss another go, every individual element combines to create an experience that feels genuinely refreshing. At times funny, at other times thrilling, The Messenger captivated me from beginning to end through its charm and challenging platforming.

Directly inspired by Ninja Gaiden, The Messenger is not just another retro 2D action-platformer despite what its appearance would suggest. While a familiarity with the Nintendo games of yore that serve as an influence will undoubtedly make the small improvements and shout outs all the more noticeable, nostalgia is not the overriding factor here. Instead, The Messenger uses your expectations of the genre to great effect, crafting a journey that continually surprised me even after ten hours of gameplay.

This is primarily the result of the core mechanic at its heart. Straddling the line between two different eras in video game history, The Messenger incorporates both an 8-bit and 16-bit artstyle, justified in the story as travelling between the past and the future. But far beyond being just an art shift, the switch between the two eras completely changes the gameplay from a linear action-platformer to one that features an explorable world filled with puzzles and hidden nooks and crannies. The sheer ambition that is found here puts other games in the genre to shame, and even though this mechanic has been the core focus ever since its debut, it’s difficult to understate just how transformative it is. It’s not just the art style that changes—it’s the music, the sound effects, and the levels themselves that open and close with the changing of eras. The result is a complex, interweaving world that blends the many disparate elements together into a cohesive whole.

It starts with a simple intro that belies the true nature of The Messenger. Humanity has been crushed by a demon army, with only a small pocket of survivors still alive on a remote island who have been practicing for years awaiting the next invasion and the coming of a prophesied figure called the Western Hero. It is as cliché and rote as it sounds.

But whereas other games would have you play as the fabled Western Hero, you are but a Messenger tasked with delivering a scroll to the highest peak in the realm. In short, you’re a delivery boy, but one who is capable of defeating scores of demons and inciting fear into their hearts. From the get go, The Messenger is tongue in cheek, playing with genre expectations to craft a story that continually surprises with its irreverent tone.

Much of the charm comes through via the dialogue, most of which is a direct result of the NPC that you will interact with the most. The Shopkeeper is exactly what his name implies; he runs and operates the shop through which you upgrade your abilities and earn new items over the course of your journey. Yet more than that, he is the Messenger’s constant companion, offering sardonic commentary on your progress while telling tales that serve no purpose. And as much as he all-too frequently offers meta commentary on the game as a whole, his changing relationship with the Messenger serves as a steady cornerstone on which The Messenger can build.

It’s telling that the most dramatic and unnerving moments in The Messenger revolve around the Shopkeeper. His reactions, or the lack thereof, ratchet up the tension where there was none beforehand. The Shopkeeper is your best friend, your cheerleader, the person who will mock you relentlessly for every mistake, and is written to near-perfection.

That’s not to say the rest of the cast is anything to scoff at. I came to love the thick headedness of the Messenger as he failed to grasp the meaning behind the words of others…like the ogres who love to work out, the wannabe necromancer and his evil talking staff, and the spirit who just wants to dig a hole. As brief as their scenes are, they leave a big impact, and create much of the joy along the way. Some jokes take hours to pull off, but when they hit, I couldn’t help but chuckle at how well planned it all was.

The Messenger’s controls are straightforward, using just the joystick and four buttons for nearly every action in the game. Starting out, you can jump and perform a sword slash, with additional abilities such as throwing a shuriken, gliding, climbing walls, and using a rope dart unlocked over the course of the game. Even with these upgrades, the number of movement options is limited, so much so that it feels like you can master these skills the more you play. And when it comes down to it, you will get a lot of practice and mileage out of a simple jump and sword slash.

Outside of the upgrades that you earn over the course of the game, the primary movement mechanic of The Messenger is called cloudstepping. Whenever you hit a projectile, enemy, or target with your sword, you can immediately jump again, allowing you to chain together jumps to get over obstacles and reach places you normally wouldn’t have access to. This is a difficult move to pull off in the beginning, but it didn’t take long for me to grasp its implications and chain together attacks so that I could stay continually airborne. It’s a very cool mechanic that provides some measure of control over the normal double jump, and is a pivotal move in your arsenal through each of The Messenger’s levels.

Proper pacing is oftentimes difficult to achieve, but here, it feels natural. The rate at which you gain new skills never felt rushed to me, with each new area providing plenty of opportunities to practice and work on your moves. My successes and failures were mine alone, and I never felt like it was a cheap mechanic or a poorly structured obstacle that did me in. This is a good thing, as the failures come repeatedly and without mercy, particularly during a boss fight. You do have a health bar, which provides some leeway when facing enemies but does little when you have to content with spike lined pits and other traps that will often cause instant death.

At least dying is a minor inconvenience due to the lack of lives. Rather than restart a level upon death, you respawn back at the nearest checkpoint with a small demon named Quarble tailing you. He’ll follow you around until he either gets bored and leaves, or until he eats a requisite number of Time Shards, which is the currency used to purchase upgrades. It’s a straightforward system that is not too penalizing while still providing some consequence for failure. It may not seem like much, but those Time Shards will be missed when you’re itching the purchase the more expensive upgrades.

A personal highlight in my time with The Messenger was the boss fights, which are as numerous as they are challenging. Their ever increasing difficulty is indicative of how strong the pacing is as a whole. Earlier bosses focus on simple movement mechanics or task you with using your new abilities to their full potential. I particularly enjoyed the end game battles, which are unforgiving yet so satisfying to overcome when I realized just how flexible the limited abilities at your disposal are.

Though the main story is well-paced and balanced in terms of difficulty, that goes out of the way if you search for the optional Power Seals. These are collectibles that open a chest in the shop and are not required to complete the story. Which is good, as the hidden locations you find them in are by far the most punishing areas in the world. They require pinpoint accuracy and quick thinking to traverse, and are worth tackling later in the game once you’ve grown accustomed to the controls and have developed nerves of steel. I tried my hand at a few of these, and while I struggled with most of them, they do provide some of the best platforming challenges available.

It’s also helped by the design of the levels themselves. They’re challenging yet fair from a gameplay perspective, but are absolutely gorgeous in terms of design and animation. Each level has a certain appeal to it, from muddy and thorny swamps to glacial peaks, which is further enhanced when you change between eras. The Messenger doesn’t stick to the colour palette found in the NES and SNES era—for the better I might add—which allows for a greater variety and depth to the foliage and enemies you encounter.

From top to bottom, the little details are what make The Messenger shine. When you dive underwater, the music is muffled to reflect the change in acoustics. A sword slash sounds noticeably different in the 16-bit era compared to its 8-bit counterpart. The way the eye of an enemy glints just a half second before launching across the battlefield. How a single level manages to be intimately familiar despite the changing times. There are so many small elements like this that don’t do much by themselves, but added together, offer so much to the experience

All this is to say that The Messenger is phenomenal. Its platforming and exploration are some of the best I’ve played in years, the tight controls meshing well with a small but immensely enjoyable toolkit. It exudes character throughout, using delightful and witty dialogue to fill the world with charm against the backdrop of a beautiful world filled with secrets. With The Messenger, Sabotage blends all this together into a harmonious package that pays tribute to its forebears while standing proudly on its own.

The Messenger’s intricate platforming and charming world make for a surprising journey that must be played
REVIEW SCORE
10
File Under: Devolver Digital, Nintendo Switch, Valve