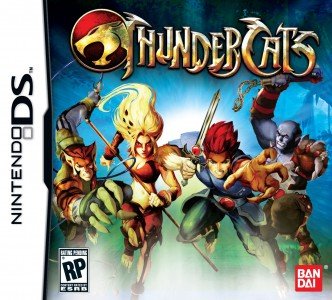 If you were a child of the 80s, chances are you’ve still got a soft spot in your hardened heart for Thundercats. It was that other fantasy action series based on an action figure line that centered on a hero with a big bad sword. You know, the one that wasn’t He-Man. The show is best remembered now (if at all) for the action figures of Lion-O and co. and the schoolyard arguments over whether or not this team of evil-fighters could beat up He-Man and his squad (I gotta give He-Man the victory. He does have Battle Cat….although, Lion-O is part cat…hmmm…let’s call it a draw). Well, thanks to never-ending 80s nostalgia, there has been a resurgence of Thundercats interest from the ironic T-shirt wearing sect. A reboot TV series premiered last year by the folks who brought you The Animatrix and it was promptly cancelled, but not before Namco Bandai went ahead and commissioned a handheld videogame based on the property.

That’s right folks, a Thundercats game is finally here. A game that had its release delayed long enough that the remake series didn’t even exist when it finally hit shelves quietly last week. For some reason, it was also released as a DS title even though those things stopped being produced months ago. Yep, there was a curious air of stink surrounding the game before anyone could get their hands on it. And yet, I still held out hope for the game because…well…it’s a Thundercats game, something the six-year-old version of me could only imagine as a beautiful dream. Plus the game is a side-scrolling beat ‘em up, just like my favorite games when I was a kid. Surely there could be some pleasure here out of nostalgia alone, right? Well, sadly nostalgia only takes you so far.

Pop the game into your 3DS (or DS if you haven’t gotten with the times yet) and you’ll get to control Lion-O. He’s got a sword and beats up bad guys just like the show. Heck, even shouts out, “Thundercats, Ho!” and will bring in one of his buddies like Tygra and Cheetara for a little extra action. For a few minutes you get that magic feeling of, “oh hey I remember this!” and then it all quickly fades away. There’s no sense in trying to describe the story, because the developers didn’t bother writing one. You just wander around as Lion-O with a sword in your hand and beat up bad guys. Fair enough, that can be fun. Unfortunately the villains don’t even have anything faintly reminiscent of “A.I.” They simply wander from left to right and do the single attack they were programmed to do. 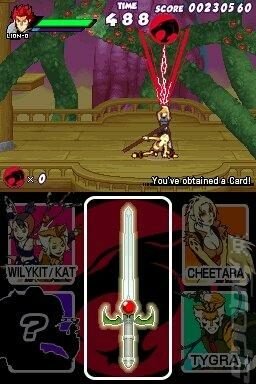 The desperate nostalgic gamer inside of you might start to think, “Well, ok. At least that means I’ll be able to do extra damage as Lion-O.” Not so much. You see, the controls are painfully sluggish and even the very limited, dated DS animation can’t keep up. The character moves like he’s dragging a ball and chain through quicksand while being filmed in slow motion. His attacks are…well…a single attack. You can pound on bad guys with your sword or jump up in the air and pound on bad guys with your sword. The gameplay is about as deep as a rushed out third party NES title and even more frustrating to play given that gaming standards have gone up significantly since then. Oh sure, you’ll see some familiar villains as bosses, but they all follow the simplest possible attack patterns and can be beaten with ease by anyone who has played a single beat ‘em up title before. The graphics are weak even by DS standards. This thing doesn’t even look as good as an average SNES title and given that it’s based on a cartoon with simple designs, it should have been a breeze to replicate the look. Instead we get a muddy, blurry image that only vaguely resembles the recognizable characters.

Remember how I said hearing the line, “Thundercats, Ho!” was exciting? That disappears quickly as well. Why? Well, because it’s the only line of recorded dialogue in the entire game. You’ll hear it a lot, too much even. The guy shouts it whenever he can and if you plan on bringing in any of the other Thundercats in to help out your quest, you’ll hear it again every single time you do so. At this point you might be thinking, “well at least I can play as the Thundercats. That’s something, right?” Not so much. While Tygra, Cheetara, WilyKit/WilyKat, and Panthro are all in the game, they are essentially used as special attacks. You’ll summon them to do a single move and every time you do, you’ll hear that same line of dialogue over and over and over and over… 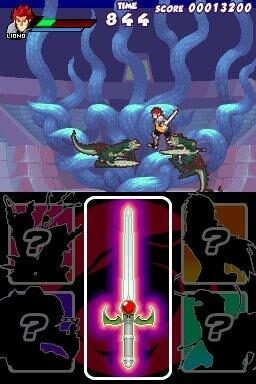 This game smacks of rushed development. It’s tied to the Thundercats reboot, not the franchise as a whole. It’s being released as a cheap-to-produce piece of DS software, not a classy 3DS title. And it’s co-opting one of the most overused gaming formats, not creating something new to stand on its own. Had the new show not been commissioned there would be no Thundercats game and I’ve also got the feeling that had that series even made it to season 2 this game may have come out in six months later with many of these problems discussed addressed. At times this game feels like a beta version of a planned Thundercats game and more than anything else, it’s a big ol’ missed opportunity.

Given the simple character designs and the violence-based storytelling of the original series, it was perfect fodder for an old school beat ‘em up. All that the developers had to do was design creative levels out of an established universe, whip up a handful of entertaining boss battles, and cram in as many in-jokes and references for fans as possible (see Turtles In Time for more). Instead this thing was haphazardly pulled together to meet a production deadline and all of the fun that could have been had was sucked out in the process. With the reboot cancelled, this game will appeal only to nostalgic fans and even they will be put off by the fact that all of the music and designs come out of the new series and not the original. It’s a game that will irritate everyone who makes the mistake of shoving it into their system.

I hate to come down so hard on a game as most have at least moments to be enjoyed, but Thundercats simply has no silver lining. The novelty of playing something called Thundercats with beat ‘em up mechanics wears off almost instantly and all you’re left with is ugly design and limited gameplay. This thing should have been cancelled before production, but since it wasn’t they may as well release it directly to landfills. That’s where all the cartridges will end up anyways, so why not cut out of the middleman.

That’s right folks, a Thundercats game is finally here. A game that had its release delayed long enough that the remake series didn’t even exist when it finally hit shelves quietly last week.
REVIEW SCORE
3
File Under: Mobile